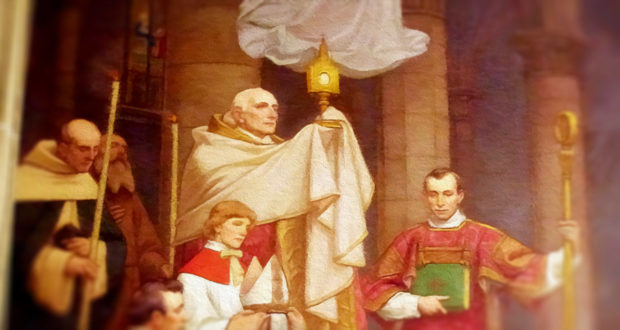 The Eucharist: A *Different* Kind of Miracle?

Mysteriousness is No Basis for Rejecting Transubstantiation

The first Christian leader of any historical importance to deny the Real Presence in the Eucharist was Huldreich Zwingli (1484-1531), the Swiss Protestant leader. Zwingli wrote:

And how can we say that it is flesh when we do not perceive it to be such? If the body were there miraculously, the bread would not be bread, but we should perceive it to be flesh. Since, however, we see and perceive bread, it is evident that we are ascribing to God a miracle which he himself neither wills nor approves: for he does not work miracles which cannot be perceived.

A Different Kind of Miracle

The Eucharist was intended by God as a different kind of miracle from the outset, requiring more profound faith, as opposed to the “proof” of tangible, empirical miracles.

In this it is certainly not unique among Christian doctrines and traditional beliefs: many fully shared by our Protestant brethren. The virgin birth, for example, cannot be observed or proven, and is the utter opposite of a demonstrable miracle.

Likewise, in the atonement of Jesus, the world sees a beaten and tortured man being put to death on a cross. The Christian, on the other hand, sees there the great miracle of redemption and the means of the salvation of mankind: an unspeakably sublime miracle; yet who but those with the eyes of faith can see or believe it?

Baptism, according to most Christians, imparts real, regenerative grace. But this is rarely evident or tangible, especially in infants. Lastly, the incarnation itself was not able to be perceived as an outward miracle, though it might be considered the most incredible miracle ever. It was not visible or manifest in the outward, concrete way to which Zwingli seems to foolishly think God would or must restrict Himself.

Jesus looked, felt, and sounded like a man; no one but those possessing faith would know (from simply observing Him) that He was also God, an uncreated Person who had made everything upon which He stood. No blood test could reveal that.

Jesus stated more than once that seeking of outward signs betrays a lack of faith and proper vision: “An evil and adulterous generation seeks for a sign” (Mt 12:29; RSV); “Blessed are those who have not seen and yet believe” (Jn 20:29).

Signs and miracles (that is, in the empirical, sensory way which Zwingli demands for the Eucharist) do not suffice for many hardhearted people in the first place: “If they do not hear Moses and the prophets, neither will they be convinced if some one should rise from the dead.” (Lk 16:31)

Jesus could walk through walls (with a body!) after His Resurrection (John 20:26), but God “couldn’t” or “wouldn’t” have performed the miracle of transubstantiation (literally, “change of substance”)? No one should rashly attempt to “tie God’s hands” by such arguments of alleged implausibility. The fact remains that God clearly can perform any miracle: however “strange”.

Many Christian beliefs seem “unreasonable” at first and difficult to grasp with the natural mind, and require a great deal of faith. Protestants believe in a number of such doctrines, such as the Trinity, God’s eternal existence, omnipotence, the power of prayer, and God’s providence). Why should the Real Presence be singled out for excessive skepticism and unchecked rationalism? I contend that it is due to a preconceived bias against sacramentalism, which in a nutshell is matter conveying grace.

This anti-eucharistic bias reminds me of the Jewish and Muslim belief that the incarnation is unthinkable. They view the incarnation in the same way as the majority of Protestants regard the Eucharist. For them God wouldn’t or couldn’t become a man. For evangelicals God wouldn’t, couldn’t, or shouldn’t become substantially, sacramentally present under the outward forms of bread and wine. The dynamic is the same.

The Eucharist: Why Not?

If Christ could become Man, He can surely will to become physically present in what continues to appear as bread and wine, once consecrated. The second thing is no less “odd” or possible than the first. Eucharist and incarnation flow from the same biblically demonstrable premise: God profoundly uses matter for spiritual and redemptive purposes.

People say that the doctrine of Transubstantiation is difficult to believe . . . It is difficult, impossible to imagine, I grant — but how is it difficult to believe? . . . For myself, I cannot, indeed prove it, I cannot tell how it is; but I say, ‘ Why should it not be? What’s to hinder it? What do I know of substance or matter? Just as much as the greatest philosophers, and that is nothing at all.’