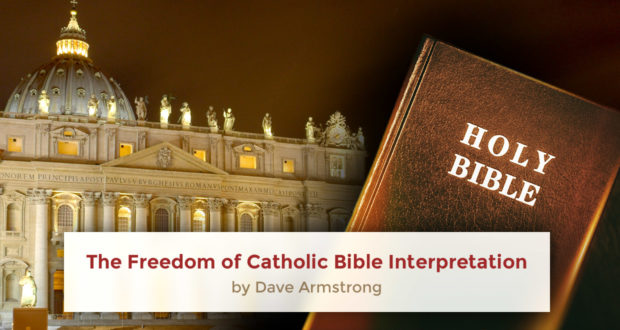 The Freedom of Catholic Bible Interpretation

Contrary to the claims of some Protestant apologists (and not a few Catholics, for that matter), Catholics actually have a wide freedom to read and interpret the Bible (provided, of course, they read with the intention of abiding by Church doctrines).

We’re also free to read different versions of Holy Scripture, though normally, Catholic versions are given a high priority. My own preferred translation is the Revised Standard Version (RSV), which has been approved in a Catholic edition with extremely few clarifications.

Nor is it forbidden by the decree of the Council of Trent to make translations into the vulgar tongue, even directly from the original texts themselves . . . Being thoroughly prepared by the knowledge of the ancient languages and by the aids afforded by the art of criticism, let the Catholic exegete undertake the task, of all those imposed on him the greatest, that, namely of discovering and expounding the genuine meaning of the Sacred Books. In the performance of this task let the interpreters bear in mind that their foremost and greatest endeavor should be to discern and define clearly that sense of the biblical words which is called literal. (sections 22, end, and 23, beginning)

Access to sacred Scripture ought to be wide open to the Christian faithful . . . the Church, with motherly concern, sees to it that suitable and correct translations are made into various languages, especially from the original texts of the sacred books. If it should happen that . . . these translations are made in a joint effort with the separated brethren, they may be used by all Christians. (ch. 6, sec. 22)

Catholics are not required to interpret every verse of the Bible according to some dogmatic proclamation of the Church. This is another common myth that we hear from our esteemed Protestant friends all the time (and again, many Catholics believe it, too, not knowing any better). Indeed, the orthodox, faithful Catholic must interpret doctrines he derives from Scripture in accordance with the Church and tradition.

But is that such a radical and controversial notion? In fact, Protestants believe largely the same. Every Protestant acts the same way within his own denominational tradition. No Five-Point Calvinist can claim that a verse in the Bible proves apostasy or falling away, or God’s desire for universal, rather than limited atonement (though in fact there are many such passages). He can’t deny total depravity by use of any text, or irresistible grace.

This is not allowed. Calvinist (Reformed / Presbyterian) tradition dictates that these doctrines, and these only, are found in Scripture. Thus, in effect, it requires a certain interpretation of many Bible verses that have been historically used to bolster Calvinist teachings. And this very thing is what Catholics are accused of: being told by their Church how to “think” in doing biblical exegesis.

Pretty much all Christians have orthodox and dogmatic boundaries that they abide by. The Catholic exegete is bound by very little, and has virtually as much freedom of inquiry as the Protestant exegete. The 1913 Catholic Encyclopedia article on “Biblical Exegesis” states:

(a) Defined Texts: The Catholic commentator is bound to adhere to the interpretation of texts which the Church has defined either expressly or implicitly. The number of these texts is small, so that the commentator can easily avoid any transgression of this principle.

Catholics are allowed to translate from the Greek, according to the latest textual and archaeological knowledge, to use different translations, and to even cooperate in ecumenical translation projects, such as the RSV and NEB. And you and I are allowed to freely interpret almost any text on its own, provided we don’t go against a dogma of the Church (I couldn’t, for example, claim that John 1:1 does not teach the divinity and Godhood of Jesus).

Only very few biblical verses have been strictly defined by the Church, and even then, only in specific applications (mostly in a negative sense: i.e., the passage cannot mean x as regards doctrine y). These include Matthew 18:18 (priests forgiving sins / absolution), Luke 22:19 (Eucharist), John 3:5 (baptism), John 20:22-23 (priests forgiving sins / absolution), Romans 5:12 (original sin), 1 Corinthians 11:24 (Eucharist), James 6:14 (the institution of the Sacrament of Anointing of the Sick).

In almost, but not quite, the same category are Matthew 16:16 and John 1:42 with regard to St. Peter being the head of the Church.

No one is (or should be) “blindly” following authority. Like any other Christians, Catholics are allowed to think, and we mustn’t reinforce contrary caricatures and stereotypes about our Church.