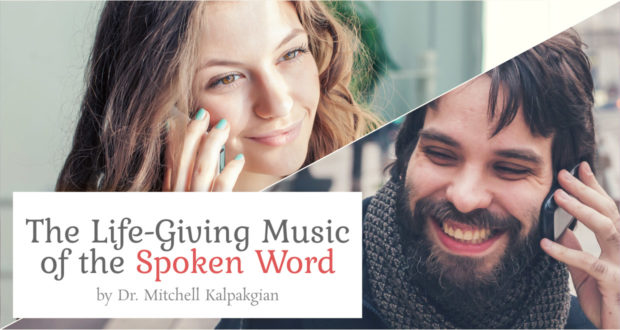 The Life-Giving Music of the Spoken Word

A strange happening of modernity is the declining use of the human voice as more communication occurs by e-mail, voice mail, and texting.

The personal encounter of two persons in each other’s presence conducting a conversation or exchanging ideas in the spontaneous play of thoughts has lost its importance as the normal exchange between human beings. When a person makes telephone calls greeted by artificial voices or merely talks into a machine to leave messages, something quintessentially human has been removed from social interactions.

An excessively automated world is a more dehumanized place. The human voice often performs wonders in matters of negotiation, diplomacy, and delicacy. In Livy’s History of Rome the cries of the Sabine women (“Will you kill the fathers of your wives and the husbands of your daughters?”) ended a war.

Without the ideals of tact, graciousness, and amiability conveyed by affable voices and measured words, civilization fails to distinguish between the human touch and the mechanical response—the natural distinction between the living and the non-living.

The educational ideal of classical learning insists not only on a sound mind in a sound body but also on the virtue of being a speaker of words as well as a doer of deeds.

Musicians often refer to the human voice as the most musical of all instruments. It possesses a remarkable range of tone and communicates an entire array of emotions. In the Iliad it inspires soldiers to fight with courage as when Andromache pleads with her husband:

“You, Hector, are my husband, young and warm and strong! Pity me, please! Take your stand upon the rampart here, before you orphan your son and make your wife a widow.”

The quality of a human voice can calm a troubled soul as the words of Lady Philosophy to Boethius in prison alleviate his great sorrow: “Are you so impoverished that you have no innate good that belongs to you?”

The human voice also produces its beautiful effects by its tone as well as its content. Speaking with the warmth of sincerity, in a proper tone of civility, or by a thoughtful choice of words exerts a powerful, magical effect. The gentleness of St. Francis de Sales’ courteous words illustrate the proverbial truth that “a soft answer turns away wrath” and that “one can catch more flies with a drop of honey than a gallon of vinegar.”

A mother’s gentle voice or lullaby can soothe a baby’s fit of anger. Listen to the music of these words addressed to a baby from George Macdonald’s At the Back of the North Wind: “Where did you come from, baby dear? / Out of the everywhere into here. /Where did you get your eyes so blue? / Out of the sky as I came through. / What makes the light in them sparkle and spin? / Some of the starry spikes left in.”

The kind words of a compliment can transform another person’s entire mood and spirit. What joy to hear words of praise like Christ’s accolade, “Well done, good and faithful servant,” or Allan a Dale’s tribute to Robin Hood: “For never have I known such kindness as thou hast shown me this day.”

How could any young woman forget the compliment Odysseus pays to the Princess Nausicaa: “But are you some goddess or a mortal woman? . . . For never have I set eyes on such perfection in man or woman. I worship as I look.” These words of mirth, praise and gratitude transport and uplift the spirit.

The oratory of a “golden-tongued” orator like St. John Chrysostom pierces the soul:

“Although you fast, although you sleep on the floor, even though, I dare say, you kill yourself, if you are not attentive to your neighbor, you have done very little; you are very far from being an image of Christ.”

The poetic words of a master wordsmith like Gerard Manley Hopkins can paint a picture that lives in the imagination forever, memorable lines like “Glory be to God for dappled things” as he marvels at the wealth of resplendent colors that fill creation; lines like “There lives the dearness freshness deep down things” as Hopkins wonders at Nature’s inexhaustible energy to renew creation; lines like “The achieve of, the mastery of the thing!” as he admires the flight of the falcon who darts through the air with all the gracefulness of a skater.

The graciousness of cheerful words of friendship that greet people with cordiality transfigures the quality of an ordinary day. In The Wind in the Willows Badger receives his friends with a glad heart brimming with mirth: “Come along in, both of you at once . . . . But come along; come into the kitchen. There’s a first-rate fire there, and supper and everything.”

The ring of mirthful laughter energizes the atmosphere with vibrant joy. In At the Back of the North Wind older brother Diamond entertains baby brother with these rollicking rhymes: “baby baby babbing your father’s gone a-cabbing to catch a shilling for its pence to make the baby babbing dance . . . father’s the best and mother’s the whitest and her eyes are the brightest of all the dams that watch their lambs cropping the grass where the waters pass.”

Words are not mere sound but also spirit, life, and energy.

Words have healing power that comforts the sorrowful heart. Blessed Cardinal Newman wrote the following words to console the grieving Henry Manning whose wife was dying:

“He does not willingly afflict us, nor will put a single grain’s weight more of suffering than it is meet and good for you to bear . . . . If in His great wisdom and love He take away the desire of your eyes, it will only be to bring her really nearer to you. For those we love are not nearest to us when in the flesh, but they come into our hearts as being spiritual beings nearer to us, when they are removed from us.”

Words also melt the heart so that one cannot say no to a child’s request or to a mother’s plea for her son. In Hans Andersen’s “The Snow Queen” no one can refuse the irresistible sweetness of little Gerda “with such beseeching tearful eyes” who pleads on behalf of her beloved companion Kay, the captive of the Snow Queen, and rescues him: “. . . he’ll never be human again and the Snow Queen will keep her power over him.”

In Augustine’s Confessions the priest reassures Monica that God will answer the cries of her prayer: “As you live, it is impossible that that the son of these tears should perish.” While words communicate information and truth, they also act as seeds that bear fruit in time, fire that rouses the heart, balm that heals a broken spirit, and inspiration that rekindles energy.

What is love without love poetry? What is prayer without the Psalms? What is happiness without laughter? What is teaching without a human voice and real emotions?

What is life without conversations?