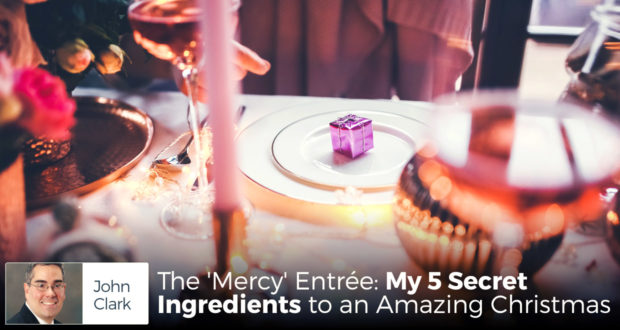 The ‘Mercy’ Entrée: My 5 Secret Ingredients to an Amazing Christmas

But I have a suggestion for an entrée for tonight’s dinner. It goes with everything: mercy.

This year at dinner, some people will want to tell all about their successes throughout the year: a job promotion, a new car, or a lovely skiing vacation they just took.

But very likely, there will be other people around the table whose year was not so good: they lost their job, their used car needs a new oil pump that they can’t afford, and the closest they came to a recreational “vacation” was a trip to the bowling alley.

Often—very often—these misfortunes happen through no one’s fault. They just happen. And if they did happen through the fault of others, admit it: you’ve made your own mistakes, too.

Sometimes, hearing about another’s achievements—especially the material ones—is just a reminder of one’s own failings. Try to be sensitive to that fact at dinner tonight.

2. Remind Others to Brag.

“Wait a minute,” you object. “You just said not to brag.”

Well, when it comes to bragging, there is one that you’re allowed to make. And yet, few of us ever make this one. Your greatest brag is that God loves you.

Everyone around the table can make that same brag. You could say that makes them pretty special, except for the word “special” is a silly understatement.

There are no ordinary people. You have never talked to a mere mortal. Nations, cultures, arts, civilizations – these are mortal, and their life is to ours as the life of a gnat. But it is immortals whom we joke with, work with, marry, snub and exploit – immortal horrors or everlasting splendors. This does not mean that we are to be perpetually solemn. We must play. But our merriment must be of that kind (and it is, in fact, the merriest kind) which exists between people who have, from the outset, taken each other seriously – no flippancy, no superiority, no presumption.

Lewis’ words are not a bad thing to concentrate on when you’re downing your pumpkin pie. If a loved one has had a tough year, don’t let him or her forget that God’s love is transcendental. Everything else is incidental.

3. Remember that the “past” is so-called for a reason.

If you look around the table at everyone else, you can probably think of ways that each of them wronged you over the years. Maybe he said something unkind to your wife twelve years ago, maybe she forgot your birthday, maybe he was mean to you when you were ten years old.

There’s a piece of advice that I learned from my six-year-old daughter’s Frozen doll that “sings” upon command. The advice: “Let it go.”

You will be tempted to make some petty and uncharitable remark to try to get even with someone. Fight the urge to get even, by getting odd. Because in this world, there’s nothing odder than being a peacemaker.

Be the guy who sees an opening for a great one-liner that puts someone down…and remains silent instead. Sometimes the wittiest thing to say is nothing.

4. Tell your parents you love them.

Some people claim that theirs is not the kind of family that says: “I love you” to each other.

Yes, you are. It’s called the Christian family.

5. Tell your children you are proud of them.

I once knew someone who was rarely sentimental. In fact, she was the last person I would think of as someone who would save a birthday card.

Yet, I noticed that she saved one card in particular. On the inside, her father had written: “I am very proud of you!”

Please don’t be afraid to say the words. Your children need to hear them. And if you’ve never told them before, those precious words will make this a Christmas to remember.

So which of these is easiest for you? :)