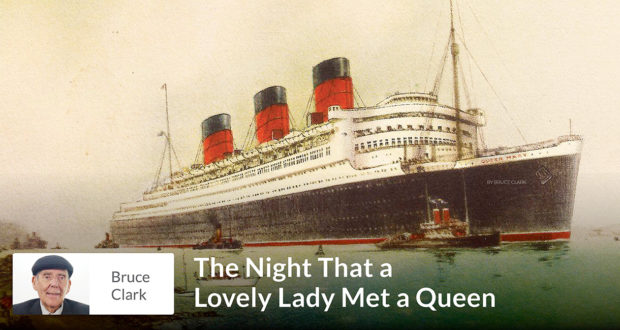 The Night That a Lovely Lady Met a Queen

We passengers on the Queen Mary watched as a magnificent gold and white ship, with all of her lights aglow in our darkening world, moved slowly toward us.

By the middle of the Nineteenth Century, ocean-going cargo ships had begun carrying eager passengers from Europe to America, or from America to Europe. Many of these cargo ships were spartan vessels which offered only a minimum of food and a hard cot.

Enterprising shipping companies, however, realized that carrying passengers could be a gold mine. And so it was that passengers started traveling on cargo ships, though according to a graduated scale.

Those who paid less fare often were packed into areas below the decks and were required to consume only the rations they had brought with them. Well-to-do passengers who paid more enjoyed glitch and glamour, such as excellent meals, small bands, and dancing in the moonlight, and games for all ages.

Two of the finest ocean cargo shipping companies were Cunard and White Star, which merged in 1934 and became Cunard White Star. By then, the construction of a 1020 foot long luxury liner, which had begun in 1930, was nearly complete.

The ship had not yet been named, but whatever the name was chosen, it had to end in the letters “ia”, like the shipping company’s other ships, which were named Aquitania, Sumaria, and Carpathia.

The board of directors finally decided that Victoria, after the British queen, was a perfect name for the new great ship.

Legends tell us that one of the directors on the board of the Cunard White Star shipping company, who was a good golfer, managed to arrange an invitation to the next golf tournament at the Balmoral Scotland Golf Course.

As the two were walking up the fairway on the final golf hole, with his time running out, the shipping company director said to the British King, “With your permission, Sire, we will name the grand new Cunard White Star ship after your wife, Britain’s greatest queen.”

The king replied “Of course you have my permission! My wife will be delighted.”

Thus the magnificent new ship, the Queen Mary, was named by a Director and a King on a golf course!

All the passengers were advised that we would be passing another ship at dusk. The ship we would be meeting was the Ile de France. That evening, as the sun was going down on the horizon, we passengers on the Queen Mary watched as a magnificent gold and white ship, with all of her lights aglow in our darkening world, moved slowly toward us.

Our rapture was broken by our captain’s loud announcement to us all: “We have sent this radio message to the Ile de Francez: “You are a gracious and lovely lady.” Immediately, the Il de France replied loudly: “But you will always be a Queen.”

I have a number of memories tucked into the special places of my heart, but near the top is remembering one night at sea, when a lovely lady met a queen.