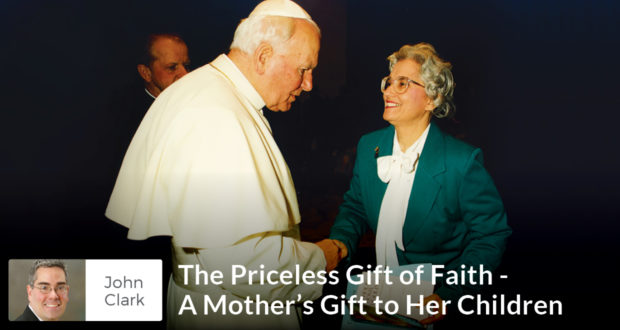 John Clark says that passing on the Catholic Faith and that love and sense of the Faith, was his mother, Mary Kay Clark’s greatest gift to her children.

It’s never easy for anyone to write about his mother, but perhaps it is easier for me than for most. You see, if I had to describe Mary Kay Clark in a single word, it would be an easy task. That word is Catholic.

The oldest in a family of nine, Mary Kay Lynch had the responsibility of almost being a second mother to lots of her brothers and sisters.

To this day, when she and her brothers and sisters get together, they stand when she comes in the room and then sit back down a little straighter in their chairs. Funny thing is, I doubt they even notice they’re doing it, but I notice. They instinctively respect her, and I think what they respect more than any other quality is her unwavering Catholicity.

Over the years, they’re not the only ones to have noticed.

In the 1950’s, when my mother was dating my father, Bruce Clark, they went on exactly two dates before she discovered that he was not Catholic, and so she informed him that she could not date him anymore.

My mother must have expected that this would end the relationship; however, that’s when the relationship really began. To her astonishment, my father responded: “OK. How can I become Catholic?” and quickly began taking RCIA classes. My father might have been the easiest conversion story in ecclesiastical history.

In the 1960’s, when some renegade Catholic parishes decided that they would change their form of worship in defiance of Rome, my mother decided that it was time to breathe with the other lung, and she and Dad began taking their family to the Byzantine Catholic Church.

In the 1970’s, when many schools decided they would no longer teach the authentic Catholic Faith in the classroom, she brought her children home. In the 1980’s, she helped inaugurate the biggest shift in Catholic education since the introduction of the parochial school, as she helped Catholic families across the world bring their own children home, too.

At Seton, my mother was—and remains—insistent on one thing: whether it’s math or literature or science or art, every subject must be Catholic.

Of course, she was insistent on another universal: every one of her children must be Catholic. And that Faith—that love of the Faith and that sense of the Faith—was her greatest gift to her children. When I was very young, Mom often brought me to weekday liturgies, when it was easier to help me understand what was taking place. She was careful to tell me about the moment of Consecration and how important that was. I still remember.

Growing up, our homeschool day involved lots of prayer. After breakfast, we said our Morning Offering, followed by Mom’s famous litany of saints. And when I say “litany,” I mean that in its fullest sense. She would name a saint, and we would respond, “Pray for us.” Saint Joseph, pray for us. Saint Philomena, pray for us. Saint John the Baptist, pray for us, and so on, with the list including dozens of saints.

With so many saints on her list, my brother once joked that my mom will be in charge of Heaven’s morning roll call. Of course, part of the reason for this is that my mother had relics of a lot of these saints. As a poor Catholic family, we had very little wealth, but my mother had one treasure that adorned our mantle: reliquaries. And we prayed in front of them every day.

At the middle of our homeschool day, she knelt and led us in the Rosary, with each of us getting a chance to lead a decade. My mom also loved novenas. When I was about seven-years-old, my father lost his job so my mother led us in a nine-hour novena, during which she woke us up a few times during the night—praying, on the hour, that Dad would find another job soon.

My mom taught us to turn to God in our “prayers, works, joys, and sufferings.” And never to turn away.

Motherhood is a gift—not a loan. And so, we children could not and cannot pay back our mothers. But I know that the first great gift that I can give my mother is to stay true to the Catholic Faith—to stay true to truth.

And the second gift I can offer is to pass along that Faith to my own children. That is proper and fitting. As Emerson put it: “In the order of nature we cannot render benefits to those from whom we receive them, or only seldom.  But the benefit we receive must be rendered again, line for line, deed for deed, cent for cent, to somebody.” In my mom’s case, those “somebodies” are her grandchildren.

And I hope she realizes that, with all her grandchildren, there is not a single one who does not, in some way, owe his or her love of the Catholic Faith to their grandmother. Just as her own children do.