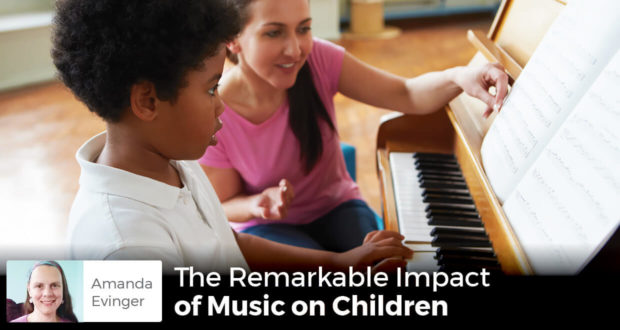 The Remarkable Impact of Music on Children

Amanda Evinger, homeschooling Mom of four, shares studies that show the tremendous power unleashed when music is played and the impact of music on children.

Well, homeschooling parents, there just may be more to that tap of the foot when your son hears Vivaldi’s Four Seasons and the shining of your toddler’s eyes when his favorite Catholic kid’s song is put on.

Studies show there is a tremendous power unleashed when music is played — a power that can promote great evil, or thankfully, great good.

Dr. Francis Rauscher, while teaching at the University of California, Irvine’s Center for the Neurobiology of Learning and Memory, documented research with preschool children and music instruction. After a six month period, those given piano lessons daily scored 43% higher on a spatial-temporal IQ test than children who instead did singing, free play, or played computer games. Many experiments reveal that classical music will increase rodents’ maze-learning speed, while repetitive “minimalist” or modern “heavy metal” music will interfere with their performance. As Andrew Pudewa, Director of the Institute for Excellence in Writing and father of seven, says in his article “Music is not Nice.”

“Most people today think of music as a nice thing—something to break the monotony of a boring job or keep you pumped up while exercising. It’s nice to have music; it improves the quality of life. I posit that it is not nice. There is nothing “nice” about music. It is a profoundly powerful thing with transformational effects—on the individual as well as society, and we ignore this at our peril.”

Research indicates the impact of music on children — for their advancement or for their decadence, as Pudewa further explains:

“David Merrell, a Virginia high school student, caused a dramatic change in his groups of mice after only three weeks of daily exposure to different music. With the first run, all groups completed the maze, on average, in just under 600 seconds. After one week, significant changes were noted, as the Control (no music) and Mozart groups improved their speed to around 450 seconds, while the Heavy Metal group (listening to Anthrax Stomp 442) slowed to a speed of over 900 seconds. After two weeks the difference was greater, and after three weeks, the Classical group was zipping through the maze in 106 seconds while the Control group was completing the maze in an average of 307 seconds.”

There is also a wealth of research gathered about the effects on children of playing various instruments.

“When you play a musical instrument, you do something to your brain that no other activity can accomplish—you stimulate it with sensory input and motor output of a perfectly ordered set of information through three neuronal pathways simultaneously…” Pudewa continues, “Consequently, you make neural connections throughout the brain in a way that nothing else can do. On top of that, learning music requires repetition that ensures more precise, exact pattern storage, and the end result is … more brain cells connected to other brain cells; in other words, more RAM in your CPU!”

Given this fantastic information, what can we, as homeschooling parents, do about it? Some of us can afford musical lessons for our children, while some of us can’t. Some of us parents are musically-inclined, while many of us are not (I won’t tell you how long I took to learn how to play Beethoven’s Fur Elise.)

Here are a few ideas:

Take advantage of some of the great musical lessons you can access online for your children if you can’t afford regular lessons, or driving to them is just too difficult.

Collect classical CD’s (such as Music Masters or Classical Kids — but make sure they are entirely appropriate — I have not heard them all) and play them here and there. Classical tracks designed for children with accompanying books are also wonderful, such as Anna Celenza’s Farewell Symphony.

Definitely don’t leave out some of Christianity’s most majestic musical treasures, such as Handel’s Messiah. My kids love to listen to Catholic Songs for Children and Lingua Angelica (both sold by SEM). Wee Sing America (amazon.com) is also a hit. If you play high-quality music regularly, your kids will start catching on in no time!

Together, let’s ask St. Cecelia’s guidance in this area. I think she knows how to pray this one through!