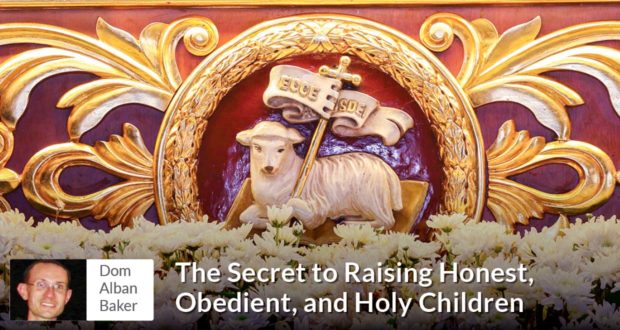 The Secret to Raising Honest, Obedient, and Holy Children

Described as a “gleam of brightness” by her biographer, Barbara Acarie (1566 – 1618) serves as a welcome consolation and inspiration to mothers, whose sacrificial and life-giving love we celebrate in a special way on May 14.

Barbara raised six children in her home, training them in supernatural and natural virtue in such a way that she offers homeschooling mothers much to consider. In particular, Barbara was a model of a woman who took her children’s upbringing seriously, striving to help children love virtue, and most importantly, love God.

Barbara was married at a very young age and had given birth to her six children, Nicholas, Marie, Pierre, Jehan, Marguerite, and Genevieve, by the time she was 28. Her program was simple—“My one ambition,” she was heard to say, “is that my children should be good”—but her execution of that plan revealed a very prudent mind and generous, sacrificial heart.

Of the many aspects of her maternal wisdom and love that could be spoken of, her love of truth, her desire for obedience and her method of teaching religion stand out. Above all, Barbara sought that her children should internalize the virtues she valued most, and she helped them to do so by helping them love what she loved.

Honesty is the mark of a mature morality because a person who speaks the truth no matter the circumstances knows that truth is more important than punishment. It is a remarkable child (and adult!) who tells the truth even when it incriminates him or her.

Barbara knew of this, and to teach her children to love truth above all else, especially the mere façade of goodness and holiness, she encouraged them to adhere to truth even in difficult circumstances. “You may lose all your own things, and break everything that belongs to me in the house,” she would say, “and if you come honestly and tell me, I will forgive you most readily; but I will never pass over the slightest lapse in truth.”

One remarkable way she brought this to bear on her household was the daily custom, before the children went to bed, of having each review his or her day with her, including a confession of sins.

Since this confession was invariably accompanied by her loving presence and support, the children learned that their sins were not as grave as their hiding of them or acting as if they could be overcome without exposing them to the light. Barbara’s sons and daughters learned to assimilate her love of truth in a living manner.

If unflinching honesty is rare in a child, more so is happy obedience, and yet Barbara strove to foster that in her children as well. It is written of her that “she required of them, invariably, prompt and willing obedience; but she never rested till her children gave her that hearty, cheerful, affectionate obedience out of which love has cast all fear.” The goal was not obedience for its own sake, just as the goal was not the chimera of honesty, but the cheerful obedience St. Paul praises when he says, “God loves a cheerful giver.”

Barbara encouraged this first by her generosity with the children. During their illnesses, she would care for them for the entire duration (a novelty given her social status); she made sure their periods of play were carefree and happy, playing with them even when she was tired or occupied with more pressing concerns; she would attend to them first even when habitual illness overtook her in middle age.

These displays of affection made it evident to the children that their mother loved them very much, and made them more open to her requests, even when challenging or contrary to their will, for they noticed she did things for them even when she was not up to it. Also, when they obeyed, especially with the right spirit, she showed her satisfaction so clearly that they were spurred on to further generosity of heart.

Beyond her special love of honesty and obedience, Barbara was notable for her way of passing on the faith. As already mentioned, she required her children to confess their daily sins to her in the evening of each day, and she used these moments to form their consciences: to awaken them to unseen faults or deeper reasons for their behavior, and to thwart scrupulosity.

Daily Mass, the Liturgy of the Hours, readings from saints’ lives, and devotion to the Mother of God were daily portions of the house’s routine. However, her most extraordinary practice was that of having her older children visit her in her room each afternoon to speak of holy things.

Her biographer writes, “This admirable mother knew well that, unless their thoughts were very early turned heavenward, this world and outward things would wholly engross their minds and veil eternity from them.” Barbara would converse with them about what they had learned from their daily catechism and encourage them to further and deeper consideration by asking them to teach one another while she listened attentively to their answers and ideas.

Once again, her loving devotion to them and their maturation led them to greater and more lasting love of God, as well as whatever is holy and good.

In her later years, Barbara assisted greatly in the founding of significant Carmelite convents in her native France, and entered one of those convents when her husband died in 1613, five years before her death. Her own daughter, a fellow Carmelite, said that “she had never learned anything more perfect in the convent than she had practiced long before in her own mother’s house.”

May this amazing mother, beatified in 1791, be a shining example to all homeschooling mothers and accompany and console them by her holy prayers.