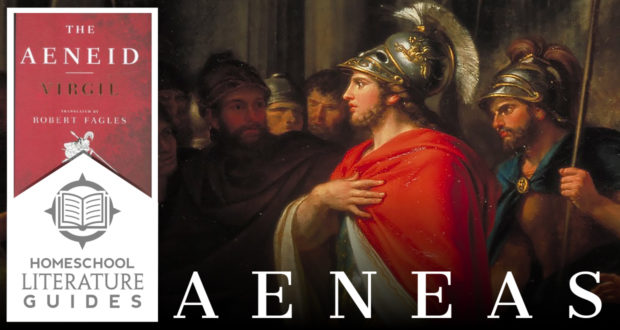 The Tears of Things: Aeneas, The Trojan Model of Humanity

To the young, the prayer to the Holy Mother which refers to human life as “the valley of tears” sounds strange.

When one is young and in love with life—through the joys of friendship, play, games, sports, fun, and birthday parties—he does not view life as a valley of tears, but as a great adventure filled with a variety of pleasures in all the four seasons of the year.

In the words of Robert Louis Stevenson’s A Child’s Garden of Verses, “Sing a song of seasons! / Something bright in all! / Flowers in the summer / Fires in the fall!”

To the young child’s imagination, the world is a great playland designed for the happiness of endless enjoyment. As Stevenson writes in ‘Happy Thought,’ “The world is full of a number of things, / I think we should all be as happy as kings.”

The child’s wealth is the bountiful treasure of play that each day and season affords: playing alone or with friends; being outdoors in the snow or leaves or indoors with story books, soldiers, or dolls; enjoying the hayloft in the summer or snowfall in winter.

However, at some point in the transition from childhood to maturity, the young discover “the valley of tears” or “the tears of things”—a phrase the Roman poet Virgil immortalized in the Aeneid.

Having witnessed the loss of his home and people in the Trojan War, Aeneas, the epic hero of the poem, travels westward to found the Roman world and build a new life for the surviving Trojans.

When he arrives in Carthage en route to Italy, he beholds a great temple built to Juno and sees scenes from the Trojan War carved on the walls. All the sad events of the past weigh upon Aeneas’ mind and stir memories of the profound losses he has suffered—the deaths of his father Priam, his brother Hector, and his wife Creusa along with the destruction of the glorious city of Ilium.

Bursting into sorrow (“the tears rivering down his face”), Aeneas cries out to his companion Achates,

“The world is a world of tears and the burdens of mortality touch the heart.”

Aeneas groans and sobs as the pictures of scenes from the war evoke heartbreaking grief over the loss of precious family members and his beloved homeland.

The tears of things (“lachrimae rerum”) always bring home a sharp, painful reminder of the human condition, the inevitable loss of the irrecoverable places, peoples, pleasures, and joys of the past that have left a void in the heart.

All through the poem, Aeneas carries in his memory a profound sadness, a deep awareness of the fragility of human life and the many vicissitudes that no mortal man can control or avoid.

As a defeated man stricken with the great tragedy of a devastating war, Aeneas continues his life with patience, perseverance, long-suffering and a seriousness of purpose and resolution to do his duty with a grave sense of responsibility.

Virgil’s hero models a noble man with a dedicated sense of service and obligation to be true to the Roman gods, to the Trojan people, and to his family. To know “the tears of things” instills in a person a sobering truth about human limitations and the human condition.

Man will suffer many defeats, lose many battles, and shed many tears. Courage, virtue, and honor often fail to achieve moral victories. Yet this sadness does not produce despair or cynicism.

Instead it concentrates the mind and will on the business of fulfilling obligations, promises, and vows rather than on the pursuit of pleasure, glory, and wealth. The human condition always involves a heroic struggle to overcome adversities or enemies.

The melancholy that accompanies the knowledge of the tears of things cultivates sensitivity to the sufferings of others and awakens a sense of pity for the losses and afflictions of others. It develops and deepens in Aeneas his humanity, his humanitas that identifies and commiserates with the broken hearts of all who suffer a similar fate.

When he sees Pallas, the son of his ally King Evander, die on the battlefield, “the tears came welling up with words of sorrow:

“Child of heartbreak . . . . Now will you never live to see our kingdom born, never ride in triumph home to your father’s house.”

In another episode of battle, Aeneas witnesses Lausus the son coming to the defense of his wounded father Mezentius only to die from the wound of a sword. When Aeneas “saw his dying look, his face—that face so ashen, awesome in death—he groaned from his depths of pity, reached out his hand as this picture of love for a father pierced his heart.”

The tears of things unite all people, even enemies on the battlefield, as they mourn their dead and experience their common humanity.

To the Stars Through Difficulties

A defeated man, a humble hero, and a dedicated leader, Aeneas never reneges on his vows, always serves and cares for others first, and thinks of himself last. He lives without fantasies or illusions, never underestimating the difficulty of the task, but also knowing that the Roman virtues of courage (virtus), work (labor), and devotion (pietas) lead the way out of darkness and sadness to great deeds and victory.

He lives the famous motto of the Romans: “To the stars through difficulties” (ad astra per aspera).

It is not spectacular performances or strokes of brilliant genius that lead to the monuments of civilization or confer glory to a nation, but steady performance, single-minded purpose, honest effort, and total commitment. Aeneas knows that the good is difficult and that fidelity and vocation require sacrifice.

Knowing the face of evil and the ugliness of war, he harbors no sentimental views of human nature or utopian visions of society. The cause of peace, justice, and civilization often demands war, and heroic leaders must confront evil and do battle to create a more human world for the common good of future generations.

The Tears of the Trojan

The tears of things inspire Aeneas to be true to his vocation of Trojan leader, founder of a nation, and father of a family. Sorrows, misfortunes, and hardships do not discourage men of devotion, piety, and pity.

As Aeneas exhorts his fellow Trojans who have suffered a storm at sea after wandering on the ocean for seven years after the fall of Troy,

“My comrades, hardly strangers to pain before now, we have all weathered worse. . . . Call up your courage again. Dismiss your grief and fear. A joy it will be one day, perhaps, to remember even this.”

The tears of things, though they break a person’s heart and fill the soul with melancholy, do not deprive a person of the will to live or a sense of moral courage.

The sadness of things does not breed morbid pessimism or cold indifference, but deepens a person’s moral awareness and sensitizes the heart.

The tears of things have strengthened Aeneas to endure all the shocks and disturbances that befall him, so he appeals to his men to summon their strength in the knowledge that some day in the future they will look backward to this event and recall it with pleasure rather than sorrow—the pleasure of having overcome difficulty, the sense of accomplishment of completing a Herculean labor, and the joy of victory in the midst of near defeat.

The tears of things lead to the heart of reality—to the inevitability of loss and grief; to a knowledge that a person’s life does not lie entirely in his own hands, but in divine powers; to a sense of the universal suffering of mankind in which much is to be endured in the battle of good and evil; and to the discovery of all the inner resources of strength of mind, heart, and soul that show the way out of the valley of tears to a time when even losses and defeats can be remembered with equanimity, with the wisdom that courage, patience, and perseverance can overcome tragedy.