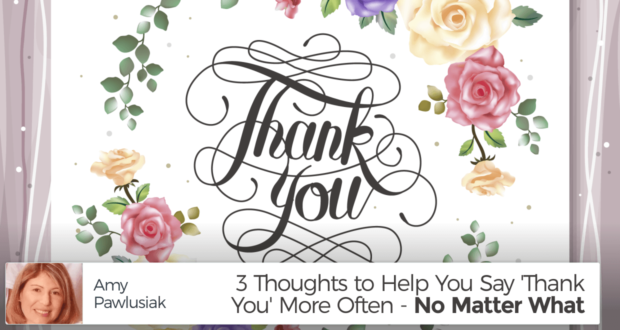 We forget to say ‘thank you’ a lot. So Amy Pawlusiak was surprised to get a note from a hurricane survivor. It reminded her of Job, and real gratitude.

Recently, in Florida where I live, we had a run-in with a hurricane.

Luckily for me, it hit the east side of the state, and I live on the west side.

However this, of course, was unlucky for many others. One of my best friends has family on that side of the state and opened her home to her parents and aging grandparents to keep them safe from the storm.

Still, with her four small children, it was a bit too tight of a fit at her home at night. So, I happily opened up my home, and for three nights we welcomed 2-3 of her children and her to stay with us. We had a great time, despite the circumstances.

The children all enjoyed the sleepovers with each other, and I got a rare chance to have uninterrupted talk time with one of my closest friends. Luckily, there was minimal damage to her family’s homes, and they were able to go home after the danger had passed.

About a week later, I received a beautiful thank you note in the mail, with a gift card to a local store I love. It was totally unexpected because I didn’t think anything of having them over.

However, because my friend and I are always watching our pennies, I worried that the gift card was too much. I asked her about it and told her that she didn’t need to give me anything and that her thank-you was more than enough.

However, she said it was from “God’s money,” and the kids and she were happy and thankful and wanted to show it, so they chose this gift together. I was overwhelmed at their generosity. It warmed my heart and taught me a great lesson. Thanking is part of our faith, and it needs to be a much bigger one than we currently give it credit for.

We need to re-learn how to show thanks.

1. No One Has to Give You Anything

When I was a child, I remember having a birthday party and I guess I wasn’t completely pleased with some of the gifts. My mom gave me some sage advice and simply said, “No one has to give you anything.”

I realized as I grew up how many people take for granted the things others give them. As much as I’d like to say I always appreciate others’ gifts, I don’t. I may not appreciate the usefulness of the gift, or maybe the gift itself just wasn’t something I wanted. In any case, it shouldn’t matter.

No one has to give you anything. Any gift you receive is something that could just as easily have gone to someone else. You may have heard the phrase, “it’s not the gift, but the thought that counts.” How true. I’ve received gifts that had loads of thought, even if maybe it wasn’t my taste.

How I appreciated those gifts!

I’ve also received things that felt like no thought was given at all, and it hurt almost more than not getting anything would have. In any case, I’ve learned over the years to just say, “Thank you!” for all of it. The good, the bad, and the ugly.

2. Blessed be the Name of the Lord!

In the Old Testament book of Job, we meet a man who is at first greatly blessed with many material gifts because of his faithfulness to God.

So, the devil decides to play a game and asks God to take away all the things God has given him, trying to prove that Job will turn on God once the blessings are gone.

God agrees to this test, so one by one, calamities strike Job—his children die, his flocks die, and finally, his own body is covered in boils. One would think Job had truly done something wrong!

Why all this evil? The reader knows it’s because of Job’s faithfulness that he is being targeted, but Job’s friends don’t. Instead, they make him feel worse, and blame him for doing something wrong that deserved this treatment. Job, however, has another take.

Although he’s despondent, he remains faithful and true to God. He is able to utter the words, “God has given, and God has taken away. Blessed be the name of the Lord!”

Honestly, could any of us say the same?

When calamity strikes me, I’m the first one in the chapel pounding on God’s great chest, asking, “Why?” I immediately ask for an explanation, relief, or a way out. I want God’s will, but I’m not always ready to accept the bad or the ugly as part of it. I only want the good, and I want it right away.

But reading Job, and through the 20-20 vision of hindsight, I’ve had to learn that what God took away, or what God gave me that initially seemed ugly or horrible, later became the thing that I prized most.

Because sometimes it takes a while to find the beauty in God’s gifts.

3. Thankfulness Must Be Lived

In the New Testament, we again learn the lesson of thankfulness very clearly. When Jesus healed ten lepers and only one came back to thank him, Jesus says, “Did I not heal ten? Where are the other nine?”

As much as I hope I would be the one that returned, I’m most often like the nine that walked away.

I don’t return to thank God for the good He did. I forget to give Jesus his credit. And since this story is mentioned prominently in the gospels, it’s obviously important to God too. He wants to be thanked.

For that matter, we need to thank everyone who does us any good. Even if they shy away, or say they don’t want it, they need to be thanked for the good they do.

Because God gave us each gifts, and they are all good, so when we use them for His will on this earth, we need to be thankful. Because we are, in effect, also thanking the God who wields His blessings through all people, that is, through US.

Moreover, giving God thanks humbles us, because it reminds us that He doesn’t have to give us anything, but He does it anyway, all the time! Because of His great mercy, and His amazing love, we are swimming in gifts.

Not always the ones we want, or the ones we thought we needed, but the ones God knew would benefit us most.

It All Works Out in the End

Now, don’t feel too sorry for Job. I used to think how unfair it was that Job had to endure all that pain and agony just so the devil could use him to prove how fallible humanity would be.

I realize now that Job grew his faith through those horrible experiences. God allowed a test so that Job could be an even greater example of faithfulness to his friends, and to the world. Job grew closer to God, and in the end of the story, was once again blessed with a new family and all the material things he once had.

But maybe, this time, Job knew just a bit more how truly blessed he was, and though he didn’t deserve anything, God gave it to him anyways.

Because God loved him, just like He loves all of us. So, next time you are tempted to be ungrateful for that gift that looks a bit ugly, instead, remember to say, “Blessed be the Name of the Lord!” and to thank God.

Because He didn’t have to give you anything, and chances are what you received may be just the thing you needed most.

Originally from suburban Detroit, Michigan, Amy Pawlusiak now lives in Tampa, Florida raising and homeschooling her very active five children, from high school to preschool. She has a masters in Education from Wayne State University in Detroit, and worked for Catholic talk-show host and writer Teresa Tomeo on her website and newsletter before deciding to devote herself to homeschooling.
amy amy-pawlusiak faith gifts gods love grateful job old testament pawlusiak thankfulness to god thanks works out in the end 2016-12-07
Contributing Writers