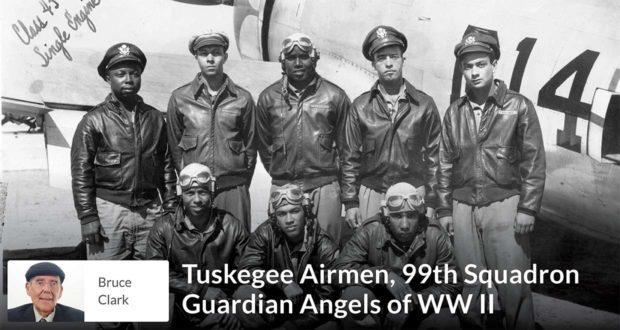 The Tuskegee Airmen, the black 99th Squadron, with German fire above and U.S. prejudice below kept our B-17 bombers safe, never losing a single U.S. bomber.

Few today are aware of the story of the Tuskegee Airmen, the Black Bombers of World War II. The details of how our black citizens became heroic airmen during that war is told in detail in a marvelous movie, Tuskegee Airmen.

Some misguided people at that time believed that non-whites could not be trained to fly airplanes. First Lady Eleanor Roosevelt thought otherwise. She wasted no time to bring her influence to change the situation. With pressure and determination, Mrs. Roosevelt went for an historic airplane ride with a black pilot and then personally arranged for a $175,000 government loan to train black pilots.

In the safety of the First Lady’s support, the historic Tuskegee University Black Pilot training program began in June, 1941, with the 99th Pursuit Squadron.

This involved 47 officers and 429 enlisted men. The War Department’s policy, however, mandated the separation of minority groups with white officers, a policy that began at the end of the Civil War.

Tuskegee’s Airmen were the first African-American aviators in the United States Armed Forces. Nevertheless, they were treated shamefully. During a train ride through one southern state, German prisoners of war were permitted to drink from the white water fountain, but the American black soldiers were not.

Conflicts Above and Below

Though the trained black members of the 99th squadron were sent to Africa and Italy, the black flyers were to protect the white American flyers, but were not allowed to have air contact with the enemy. One historic day, two white bomber pilots from Texas stopped at the 99th Squadron headquarters.

“Are you really pilots?” the flyers asked. The affirmative reply was greeted with howls and laughter from the white pilots.

In desperation, because of a shortage of flyers, the black 99th Squadron was re-assigned to protect B-17 bombers from the swift German aircraft. On further missions, no bombers were lost with the protection from the black pilots.

The black pilots painted their plane’s rudders bright red to tease the Germans and to give the American bombing crews confidence when they saw them in the battle. Their fame quickly spread.

One morning, a familiar pilot from southern Texas made a request to the Bomber Command: “I want the 99th Squadron to escort us. I trust those men to take us to Berlin and get us back!”

This was the continuation of the wonderful heroic story of black pilots who not only were determined to help their country win the war, but also were determined to prove to the nation that they too loved the United States, their home, in spite of years of mistreatment and prejudice.