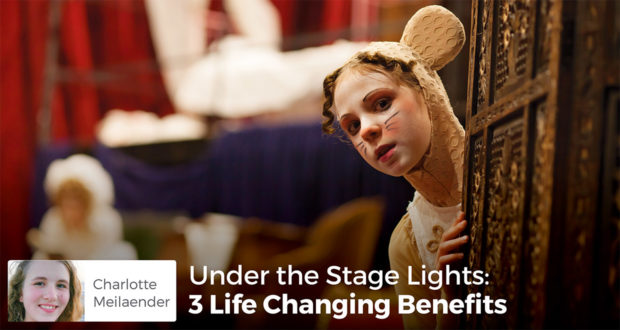 Charlotte Meilaender suggests three ways participation in the performing arts can benefit homeschoolers. Could this be an extracurricular activity for you?

The summer is drawing to a close again, or rather, as it so often seems, hurtling toward its end with alarming speed.

This is one of the busiest times of year for homeschoolers. There are books to be ordered, schedules to be planned, and study supplies to be restocked.

In addition to this, many families are considering extracurricular activities, such as sports, music, or art classes.

As you prepare for the coming school year, there is another activity you might want to consider: an involvement in the performing arts.

There are many opportunities for homeschoolers to take part in acting, singing, or dance classes that are geared toward a performance.

Although it adds to the chaos of parents’ schedules, performing in front of an audience can be a valuable experience for children.

Performing teaches children important skills, opens opportunities to them, and may very well be the highlight of their school year.

For those children who are familiar with performing and love doing so, parents will likely have no problem getting them on stage. Anyone who has ever fallen in love with performing knows the thrill of stepping onto an empty stage and facing a sea of people silhouetted in the glare of the stage lights.

For those of you who know what I’m talking about, you probably don’t need this article. Perhaps you are already participating in a show or concert.

But why not try something new this year? Try out a different branch of the performing arts.

Work on a specific performing skill you haven’t mastered yet. Or get together some friends and stage your own play!

The majority of my readers, however, probably do not perform on a regular basis. Often parents aren’t familiar with the performing world and don’t know where to start. Other times, families are worried they can’t fit extra activities into their schedules.

But even if it’s difficult, I encourage you to give it a try! A small local performance will confer much the same benefits as a huge, time-consuming event. Find a performing event that is fun and enjoyable, not hectic and stressful.

Performing can teach the following important skills, and is a wonderful experience for families.

Many children are nervous when speaking to adults, showing off their skills, or otherwise standing out in public.

It is important that children learn how to communicate with other people. Performing gives the self-confidence needed for this, and leads to a better ability to interact with others. Over time, even children who are naturally shy will learn to approach others with grace and ease.

This can be very valuable later in life, when applying to college or for a job.

Performing is also hard work. An actual performance might not seem too difficult, but it’s hard to imagine the amount of effort that goes into putting a production on stage.

Countless rehearsals are necessary to prepare a play, dance, or concert.

Often a particular scene or some minute detail must be practiced over and over again before it is perfect. Every performer must give his best and concentrate on his part, while at the same time learning to work with the rest of the group.

Children need to be able to take criticism from their teachers and directors while keeping a positive attitude and encouraging their fellow performers.

A day spent rehearsing can in many ways require far more self-discipline than a day doing schoolwork.

The work habits children form in the studio or theatre will greatly affect how they work at home and beyond.

Lastly, by participating in a performing event, children can discover new hobbies or even hidden talents.

Of course, it’s unlikely that a family play will lead to a career as an actress. In fact, it will probably not lead to any professional career at all, and many parents and children don’t even want that kind of a future. But that family play could enkindle a lifelong passion for acting and the theatre.

Or maybe that concert will prompt your child to join a local band. Your stage experience could cause your entire family to work to bring wholesome entertainment to your community.

Finally, does this mean parents should always push their children to perform? Not necessarily.

Every child is different, and many children have non-performing skills that should take precedence. Some children are just not interested, while others experience stage fright.

These children can be encouraged to perform, but often they would make better use of their time pursuing other interests.

After all, there’s a limit to how many performers the world can accommodate.

In general, it is important to encourage children to pursue their own unique skills, rather than think that they have to succeed in a particular field.

And what about toddlers? Should they be on stage?

I personally feel a little bad when I see a group of three year olds, their faces plastered with makeup, standing on stage doing . . . absolutely nothing. (Because you can hardly expect a three year old to remember the steps of a dance or the words of a song when faced with bright lights and an enormous audience.)

Most toddlers are just too young to perform. They need to spend time exploring the real world before they are ready to play a part on stage.

For the majority of school-aged children, though, performing on stage is a fun opportunity. It teaches meaningful lessons and opens up a world of possibilities.

So if you are looking into activities for your children, why not consider a family-friendly performing event?

Even if your children never pursue performing beyond their school years, it will still impact them in incredible ways.

Let them experience the thrill of standing under the stage lights.

Or at least, let them learn to cross the stage in their glare without tumbling over the edge.

Charlotte Meilaender is a German-American high school student. An aspiring ballet dancer, recreational writer and active Catholic, she performs ballet with the Genesee Dance Theatre and loves being on stage. She also volunteers at a historic village near her home which includes dressing in period costume and explaining 19th century life to visitors. Charlotte is fluent in German and has travelled throughout the United States and Europe and enjoys getting to know different people and cultures. She lives in rural western New York with her parents, four siblings and the family cat.
charlotte charlotte-meilaender children concert confidence dance homeschooling meilaender performing play skills stage lights theatre valuable experience work habits 2016-08-24
Contributing Writers