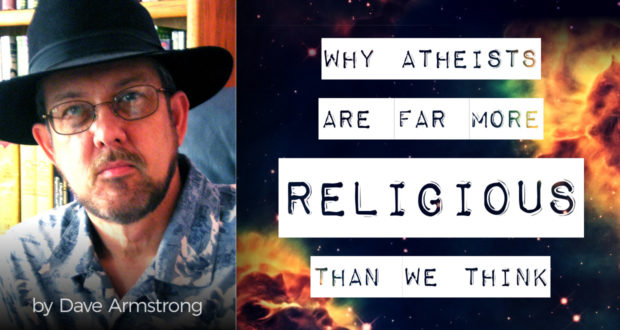 Why Atheists are Far More Religious Than We Think

It’s currently fashionable for atheists to deny that a universe without God is caused by “pure chance” or “randomly colliding atoms,” as their earlier forebears might have boldly and proudly described it.

Yet natural “laws” somehow attained their remarkable organizing abilities. One either explains them by natural laws or by humbly bowing to divine teleology at some point, as an explanation every bit as plausible as materialism (everything being supposedly “explained” by purely material processes).

Matter essentially “becomes god” in the atheist / materialist view; it has the inherent ability to do everything by itself – a power that Christians believe God caused, by putting these potentialities and actual characteristics into matter and natural laws, as their ultimate Creator and ongoing Preserver and Sustainer.

The atheist places extraordinary faith in matter – arguably far more faith than we place in God, because it is much more difficult to explain everything that god-matter does by science alone.

Indeed, this is a faith of the most non-rational, childlike kind. It is quite humorous, then, to observe the constant charge that we Christians are the ones who have a blind, “fairy tale,” gullible, faith, as opposed to self-described “rational, intellectual, sophisticated” atheists.

Such belief is a kind of polytheistic idolatry of the crudest, most primitive sort, putting to shame the primitive worship of the ancient Babylonians, Philistines, Aztecs, and other groups. They believed that their silver amulets and wooden idols could make the sun shine or defeat an enemy or cause crops to flourish.

The polytheistic materialist, on the other hand, is far more religious than that. He thinks that trillions of his atom-gods and their distant relatives, the cell-gods, can make absolutely everything in the universe occur, by their own power, possessed eternally either in full or (who knows how?) in inevitably unfolding potentiality.

One might call this (to coin a phrase) Atomism (“belief that the atom is God”). Trillions of omnipotent, omniscient atoms can do absolutely everything that the Christian God can do, and for little or no reason which we can understand (i.e., why and how the atom-god came to possess such powers in the first place).

The Atomist openly and unreservedly worships his trillions of gods, with the most perfect, trusting, non-rational faith imaginable. He or she is what sociologists call a “true believer.”

Oh, and we mustn’t forget the time-goddess. She is often invoked in worshipful, reverential, awe-inspiring terms as the be-all, end-all explanation for things inexplicable, as if by magic her very incantation rises to an explanatory level sufficient to shut up any silly Christian, who is foolish enough to believe in one God rather than trillions. The time-goddess is the highest in the ranks of the Atomist’s wonderfully varied hierarchy of gods (sort of the “Zeus” of Atomism). One might call this belief Temporalism.

Atomism is a strong, fortress-like faith. It is often said that it “must be” what it is. The Atomist reverses the error of the Gnostic heretics. They thought spirit was great and that matter was evil. Atomists think matter is great (and god) and spirit is not only “evil” (metaphorically speaking), but beyond that: non-existent.

Some Atomist utterances even have the “ring” of Scriptures; for example, urgings of an appropriate humility regarding man’s opinion of his own importance, because the universe is so large, and we are so small, as if largeness itself is some sort of inherently God-like quality.

Yet in Atomism, each person is gods too, because he is made up of trillions of atom-gods and cell-gods. The Atomist manages to believe any number of things, in faith, without the unnecessary addition of mere explanation. But others of different (much more rational) faiths may not think such things as “obvious” as Atomists do.

“Why” questions in the context of Atomism are senseless, because they can’t overcome the Impenetrable Fortress of blind faith that the Atomist possesses. The question, “Why do the atom-gods and cell-gods and the time-goddess exist and possess the extraordinary powers that they do?” is senseless, meaningless and ought not be put forth. It’s bad form, and impolite. We know how sensitive overly religious folk are.

Instead, we are asked to bow to the countless mysteries of Atomism in dumbstruck adoration and awed silence. The very inquiry is “intrusive.”

In a certain remote and limited sense, we Christians (since we ourselves possess and value faith) stand in awe of such Pure Faith, with its sublime fideism and Absolute Trust in Design via trillions of atom-gods. It is, indeed, an ingenious, self-contained, even elegant system.

But it’s also hopelessly irrational, self-defeating, and ultimately incoherent, albeit an immensely enjoyable game to play, like much of modern philosophy.

For that reason, the Christian must reject it, since we believe that irrational and non-rational beliefs are untrue and unworthy of anyone’s allegiance.