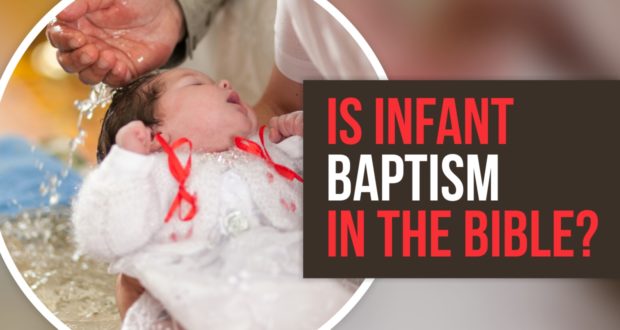 Why Do Catholics Baptize Babies? They Don’t Know What’s Going On!

ZEKE the “Jesus Freak”: Hey Cathy, why do Catholics baptize babies? It’s pointless, since they don’t know what’s going on and can’t repent, according to Acts 2:38 and Mark 6:16.

CATHY the Catholic: But where does the Bible specifically prohibit the baptism of babies?

CATHY : I thought you only followed what is plainly taught in the pages of Scripture?

ZEKE: It’s a conclusion that follows from ideas that are clearly in Scripture. It’s still a biblical doctrine.

CATHY : Ah! That’s a big difference. Now we’re both in the same boat, since the Bible doesn’t explicitly teach about baptism of infants. We must make inferences.

ZEKE: Where? I’ve never seen any in the 17 years since I was saved.

ZEKE: That’s not possible. You have to repent and be born again in order to receive salvation, as John 3:5 says.

CATHY : It actually says that one must be “born of water and the Spirit.” Catholics, along with the church Fathers such as St. Augustine and many Protestants (e.g., Lutherans and Anglicans), interpret this as a reference to baptism, and a proof of the necessity of infant baptism.

ZEKE: That doesn’t make sense. Water here refers to the amniotic sac when a baby is born. Babies can’t be born again. Jesus is contrasting natural with spiritual birth.

CATHY : Are you saying then that a baby can’t be saved, and will go to hell if it dies before the “age of reason”?

ZEKE: No, no, I would never say that. God is too merciful to let that happen to an innocent little baby.

CATHY : But you believe in original sin (1 Cor 15:22), inherited by all people as a result of the fall of Adam and Eve, right?

ZEKE: Well, yeah. What are you getting at?

CATHY : Once you say that a baby can be saved, then clearly there is a justification for baptizing infants, since there are factors other than their own consent which enter into the question of their salvation. This brings us to a more communal, covenantal view of salvation (see, e.g., 1 Cor 7:14; 12:13), rather than the individualistic notion that many evangelicals have. The reality of original sin makes baptism desirable as soon as possible, since it removes the punishment and guilt due to sin and infuses sanctifying grace. This is why most Protestants through history, including Lutherans, Anglicans, Methodists, Reformed, and Presbyterians, have baptized infants.

ZEKE: Now wait a minute. Surely you don’t believe that baptism actually does anything, do you? It’s only a symbol.

CATHY : Matter can be a conveyor of grace, and sacraments are the physical, visible means of grace.

ZEKE: We don’t believe in those things because they’re unbiblical. The Bible teaches that the Spirit giving grace (Jn 6:63; Rom 8:1-10), not matter. Catholics are always getting weird about things such as statues, relics, rosary beads, the wafer of communion, and holy water. This usually degenerates into idolatry.

CATHY : I disagree. God Himself took on flesh in Christ. Paul’s handkerchiefs healed the sick (Acts 19:12), as did even Peter’s shadow (Acts 5:15)! Likewise, baptism is said to regenerate sinners. Acts 2:38 refers to being baptized “for the forgiveness of your sins.” 1 Peter 3:21 states that “baptism . . . now saves you” (cf. Mk 16:16; Rom 6:3-4). Paul recalls how Ananias told him to be “baptized, and wash away your sins” (Acts 22:16). In 1 Corinthians 6:11, Paul strongly implies an organic connection between baptism (washed), sanctification and justification. Titus 3:5 informs us that “he saved us, . . . by the washing of regeneration.” What more biblical proof is needed? Is all this explained as merely “symbolic”?

ZEKE: I gotta run. I have some questions for my pastor . . .