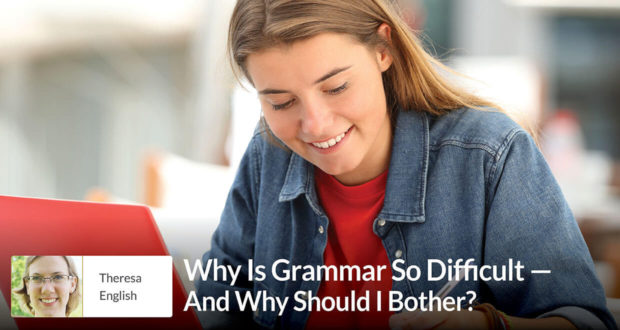 Why is Grammar So Difficult? And Why Should I Bother?

When we communicate beauty, goodness, and truth, the eternal, we fulfill the highest purpose of language. This communication is not possible without grammar.

It seems that many people approach grammar believing that it will be easy. After all, if I speak English, don’t I already know grammar?

Yet, since we humans are bodily creatures, we know something of anatomy. We know the external parts of our body. We know the names of our major organs. We may know the common names for some of our bones. We know which muscle is a bicep and how to flex it. But we had to learn these things.

Similarly, because we speak English, we know some grammar. We usually know how to match subjects and verbs. We know that adjectives come before nouns. We may even know the names of the parts of speech. We learned these things, even though we may not remember doing so.

In the same way, as many of those encountering grammar have discovered, speaking English does not prepare one for the level of knowledge that the study of grammar entails. Grammar is difficult because, like anatomy, it’s a demanding field.

Grammar, like anatomy, is the study of structure, in this case, the structure of language. In science, structure facilitates function. For example, I have opposable thumbs (structure) so that I can grasp things (function). I have different types of joints (structure) so that I can move in the ways that I need to (function). The structure of language, grammar, exists so that we can perform the function of communicating.

Note that a defect in anatomical structure leads to difficulty functioning. Let’s say I was born without a thumb. Using my hands to grasp becomes much harder and some tasks may be impossible. This can be compared to a sentence with some minor grammatical errors. It may be understood, but understanding is impeded.

Now let’s say I was born without hands at all. The difficulty of grasping things has drastically increased. In fact, I have to resort to using other, less well-suited parts of my body to take hold of things. Similarly, an ungrammatical sentence fails to convey meaning. This can happen, for example, when we are learning foreign languages. Because we do not yet know the grammar, to explain ourselves we may have to resort to gestures and facial expressions, which can only take us so far. It can also happen when we attempt formal writing.

Because we do not have a command of grammar, we struggle to express ourselves clearly and sometimes fail entirely. In both anatomy and grammar, lack of structure leads to a breakdown of function.

The Function of Grammatical Structure is Communication

For example, animals cannot communicate across time, but written human language allows us to do this. Scripture is accessible to us because of this trait of human language.

While our writing is not likely to perdure through millennia as Scripture has, the proper language that we learn through writing can communicate beauty and goodness and truth, the eternal, to others. When we communicate at this level, we fulfill the highest purpose of language. This communication is not possible without grammar.

The world is a garden intended by humans to cultivate. Language is the special province of men and women that we are called to develop. We cannot all be Shakespeare or Hardy or Donne, but we can improve, growing in our grammatical knowledge and ability, moving from where we stand into the depths of eternal poetry and praise.

Theresa English holds a B.A in Political Philosophy from Thomas More College and an M.A. in Applied Linguistics from the University of Pittsburgh. She enjoys spending time with her numerous siblings, nieces, and nephews and has been known to diagram sentences and peruse the dictionary in her spare time.
communication english grammar Grammatical Structure knowledge languages structure theresa Theresa-English What is Grammar written human language 2021-09-02
Contributing Writers