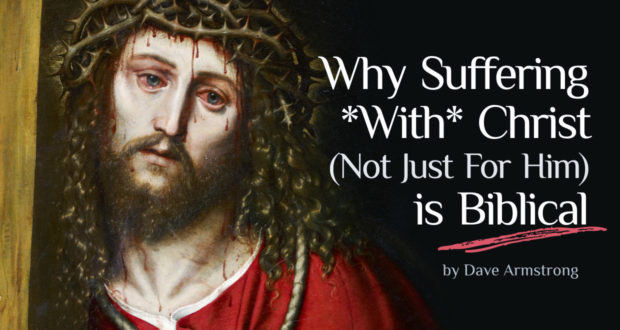 Why Suffering *With* Christ (Not Just For Him) is Biblical

Most educated, serious Christians understand that suffering is to be expected in the Christian life. It’s not an anomaly or interruption in an otherwise “normal” life. It’s to be expected; even welcomed. It makes us more like our Lord Jesus, Whom we serve. One of the most well-known and frequently cited passages in this regard is 1 Peter 4:12 (RSV):

Beloved, do not be surprised at the fiery ordeal which comes upon you to prove you, as though something strange were happening to you.

A particularly “Catholic” theme in the New Testament (and appropriate to reflect upon, especially during Lent), is the notion of suffering with Christ. Hence, in the very next verse, St. Peter writes:

But rejoice in so far as you share Christ’s sufferings, that you may also rejoice and be glad when his glory is revealed.

What does it mean to “share Christ’s sufferings”? I think it has to do with God involving us in His work all down the line. We know that He saves us by grace alone, yet we cooperate in that (also by His grace), to such an extent that St. Paul can say that “we are God’s fellow workers” (1 Cor 3:9) and that we are “Working together with him” (2 Cor 6:1); indeed he tells us to “work out your own salvation . . . for God is at work in you” (Phil 2:12-13).

Paul makes it very clear that he is working, and God is simultaneously working in him, enabling him to do what he does: “But by the grace of God I am what I am, and his grace toward me was not in vain. On the contrary, I worked harder than any of them, though it was not I, but the grace of God which is with me.” (1 Cor 15:10)

Likewise, God willed that we participate in some sense in the very Passion of Christ, in a “secondary” way. His work is infinitely sufficient for our salvation in and of itself, but He chooses to draw us up into the great drama of redemption. Again, this is quite explicitly biblical:

Romans 8:17 . . . fellow heirs with Christ, provided we suffer with him in order that we may also be glorified with him.

2 Corinthians 4:10 always carrying in the body the death of Jesus, so that the life of Jesus may also be manifested in our bodies.

Galatians 2:20 I have been crucified with Christ; it is no longer I who live, but Christ who lives in me; . . .

Galatians 6:17 Henceforth let no man trouble me; for I bear on my body the marks [Gk., stigma] of Jesus.

Philippians 3:10 that I may know him and the power of his resurrection, and may share his sufferings, becoming like him in his death,

Colossians 1:24 Now I rejoice in my sufferings for your sake, and in my flesh I complete what is lacking in Christ’s afflictions for the sake of his body, that is, the church,

We see that even in baptism, St. Paul draws a direct connection to Jesus’ death on our behalf, and our somehow being involved in that:

Romans 6:3-8 Do you not know that all of us who have been baptized into Christ Jesus were baptized into his death? [4] We were buried therefore with him by baptism into death, so that as Christ was raised from the dead by the glory of the Father, we too might walk in newness of life. [5] For if we have been united with him in a death like his, we shall certainly be united with him in a resurrection like his. [6] We know that our old self was crucified with him so that the sinful body might be destroyed, and we might no longer be enslaved to sin. [7] For he who has died is freed from sin. [8] But if we have died with Christ, we believe that we shall also live with him.

Because this teaching is so grounded in the Bible, it is not foreign in essence to Protestantism. After all, John Calvin, one of the founders of that system, wrote in his Commentaries about Colossians 1:24:

As, therefore, Christ has suffered once in his own person, so he suffers daily in his members, and in this way there are filled up those sufferings which the Father hath appointed for his body by his decree. . . . we must be conformed to Christ in the endurance of the cross, and that the fellowship that we have with him extends to this also.