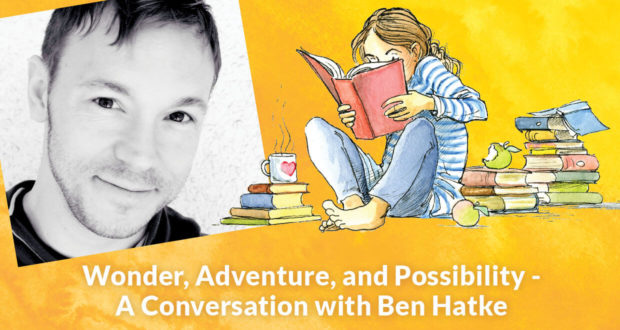 Wonder, Adventure, and Possibility: A Conversation with Ben Hatke

Seton artist Ben Hatke waxes on the creative impulse as a habit, how art influences faith and has advice for parents on encouraging their kid’s creativity.

What was the first art project you did for Seton Home Study School?

That’s a tough one! It’s been such a long time and I’ve done so many different projects. I started doing illustrated odds and ends when I was also grading English.

My first real project, though, was the phonics series. Those books were a dream project for a just-starting-out illustrator. The books required hundreds of little pictures.

Hands down, that would be Early Literacy for Young Catholics. Not only was it a blast to illustrate, but I got to work with the wonderful Jim Shanley. I lived pretty near Jim at the time, so it was always fun to stop in and talk to him in person about the project. Illustrating the book gave me the chance to be colorful and fun and make every page different.

What makes you want to create?

Once the creative impulse becomes a habit, it’s hard to find something that doesn’t inspire art. I draw a lot of inspiration from the natural world and human-made things that are a little ground down and lived in. Old houses, wrecked cars, abandoned factories… I’m very serious about the idea that creativity needs to be fed.

It needs new experiences and new ideas. Art and invention comes along when you combine things in new ways, so it’s good to have a large internal library of things to try combining.

How does being an artist influence your faith?

Most days it’s in how I view the world, which is with a sense of responsibility. I have a real sense of vocation from my work as an artist.

When I was studying in Italy I got really excited about the artist Pontormo. His drawings are just amazing. One day that summer I was late for a lecture and running through the streets of Florence, trying to keep up with my friend Lynn (Lynn was a teacher at the studio and a really gifted painter).

We were rushing from the portrait studio back to the main studio but she suddenly ducked into a little church and said “I want to show you something.” What I saw there was Pontormo’s beautiful Deposition from the Cross.

It’s a swirling, but masterfully-composed mass of interconnected bodies, but what struck me most was the colors. It’s a riot of pastel tones like a pile of those springtime Easter M&Ms. It was so great. We only stayed a few minutes before rushing to the lecture, but it left a deep impression on me.

I don’t know if the painting changed the way I see the world exactly, but it is a piece of sacred art that depicts maybe the lowest point of Christianity (Christ being taken down from the cross, apparently dead and gone) but it is in no way grim. There’s an important message there.

How has the art of others influenced your faith?

I’ve been fortunate to have many amazing artists cross my path and touch my life, through friendship and/or mentorship. I’ve gotten to meet, in real life, artists and writers whose work I grew up with.

One of my earliest artistic mentors was my Latin and etymology teacher, the late Bob Butz, the roaring lion. He was a tremendous draftsman, a stoneworker and a sculptor, and a man of deep faith. He went to Lourdes every year to lower the sick into the water. He did this even after having both his knees replaced. That was a powerful witness for me.

However, other artists I have known and loved are committed atheists. Each one has influenced me in some way, either by showing me beauty, giving me a different perspective, or causing me to reflect on what might be lacking. Faith is a constant journey and struggle.

What are some current projects?

Ha! Well, you can find my graphic novels and picture books online and in bookstores. The main ones are the Zita the Spacegirl series, Mighty Jack, Little Robot (a good one for very early readers) and Nobody Likes a Goblin. The project I’m working on now is a Young Adult prose novel called The Princess in the Piazza.

How can people connect with you?

You can keep up with my work at benhatke.com. I also post lots of daily art on Instagram where I am @heybenhatke.