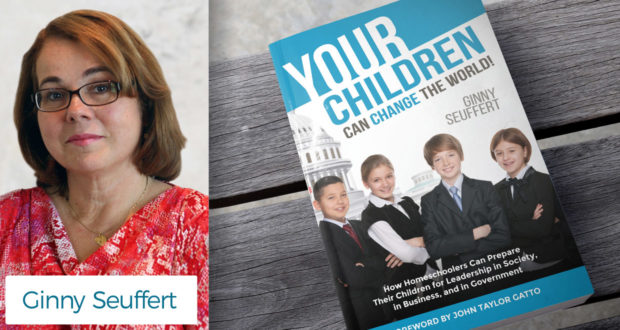 ‘Your Children Can Change the World!’ Ginny’s New Book!

For over a quarter of a century, I have been amazed at the fine adults our Catholic homeschools are turning out.

Formidable in faith, clear in thought, and confident in attitude, without a doubt many are natural leaders. Graduates of home academies are starting strong families of their own, and just now entering business and the professions in significant numbers.

That’s good news in a culture where many young people seem clueless about Western Christian history and traditions, and resist entering into responsible citizenship much before the age of thirty.

Clearly the United States would benefit greatly if these home-learning alums could one day assume positions of influence and authority and bring their strong values to leadership roles.

Most homeschooling families, however, rich in children but modest of means, lack the resources, and frankly the know-how, needed to assist their kids to the top rungs of the ladder of success.

The question that plagued me for years was: What path do we follow to move children from less-entitled backgrounds to places where they can be a powerful force for good?

Then I learned that John Taylor Gatto had mapped out a plan.

Despite winning numerous awards as a public school teacher, Mr. Gatto became disenchanted with government education, believing that kids learned despite it, rather than from it. In his free time, he visited elite East Coast private prep schools researching methods they used to prepare graduates to enter the finest universities, and then move to the top of their professions.

His investigations revealed that, although each of these schools is quite unique in curriculum and culture, they nevertheless share fourteen important similarities, or themes.

When I read the themes, I could not shake the idea that they absolutely could be tailored and adapted to our homeschools. I wrote a series of articles for Seton Magazine, “How to Get an Elite Prep School Education on a Homeschool Budget.”

The series was well received, so I added some new material and wrote a conclusion. John Taylor Gatto graciously penned an introduction, and voila, here’s Your Children Can Change the World.

Gatto’s themes certainly challenge established wisdom. For decades homeschooling parents heard how we are cheating our children by denying them classroom interaction where they can practice “cooperative” learning.

In today’s public schools, students are sometimes required to break into groups to solve simple math problems. After collaboration, group consensus is sought; a student team representative demonstrates the agreed upon procedure, and then class consensus is polled.

All this teamwork to solve a simple problem such as 125 X 5, but necessary, we are told, because one day, as adults, our children will need to work as part of professional teams, and serve on office committees. Interestingly, Gatto found that pricey, private prep schools encourage independent learning – not collaborative.

Graduates of these schools are groomed to lead the team and chair the committee, not serve on them.

Your Children Can Change the World outlines what steps teaching parents can take to ensure that their children will one day bring their well-formed values and take their places at the head of the conference table. Our nation certainly needs them there.

Get your copy of this book!

In her book Your Children Can Change the World, Mrs. Seuffert has offered the rest of us a transformation of the 14 principles I discovered into a priceless toolkit of ideas how anyone responsible for the education of others can strive to achieve the same value for their student(s) as a wealthy kid would receive if his/her parents sent them to Episcopal High (which Sen. John McCain attended) or to Andover (which both President Bushes did).

Following Mrs. Seuffert’s advice, your students will seek the same skills that history has shown leaders possess in business, politics, arts and sciences—rather than the trivializing grade and gold-star chasing, relevant to nothing significant, that public schools or common garden-variety private ones pursue as evidences of learning. Wake up!

Those prizes have no lasting value, connect to nothing useful in later life, while competence in “the active literacies,” one of the 14 categories Mrs. Seuffert develops, will serve you faithfully for the balance of your days, and may easily become the basis of a comfortable livelihood and high reputation.