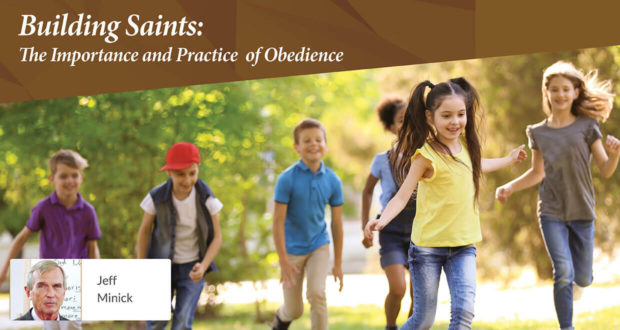 Building Saints: The Importance and Practice of Obedience

Obedience may be an unfashionable word in our permissive culture but without it, homeschooling is challenging at best. Here are simple ways to get on track.

This is the moment of the school day you dread. You open the Saxon Math book, read through the lesson with 8-year-old Johnny, and then tell him to solve problems 1-15. You’re helping the other children with their schoolwork, but every time you glance at Johnny, there he sits, pencil in hand, paper unmarked, staring into space.

You remind him again to do his math, and he writes down a math problem or two on the paper, but then returns to his thousand-yard stare.

14-year-old Jennie dislikes writing as much as Johnny does math. She spends more time complaining about why she has to write this composition that’s due at the end of the week than she does working on it, yet she obeys every command from her soccer coach without any sign of resistance.

How do we address these scenarios? How do we instill enthusiastic cooperation in our children and win their obedience when we instruct them to complete a math lesson or finish their paper on The Bronze Bow?

Obedience is an unfashionable word in our permissive culture, sometimes arousing unease even among the faithful.

An example: whenever that line from Ephesians 5 is read during Mass about wives being subject to their husbands, some congregants shift uncomfortably in the pews, even though Saint Paul’s follow-up injunction, that husbands should love their wives as Christ loved the Church, is far more demanding.

Among some homeschooling parents, obedience may likewise seem freighted with some heavy cargo. They sometimes find it tough to act as both parent and teacher.

A child in a brick-and-mortar school clearly distinguishes between parent and teacher, but that line is erased for homeschoolers. The 11-year-old who willingly sets the table for supper whines daily about her spelling lesson, something she’d never do in a classroom outside of the home.

But there are ways we can enhance obedience in our children, and chief among these is to first recognize that it is a virtue. In Character Building, David Isaacs devotes an entire chapter to obedience, contending that “obedience is not a virtue designed for small children, it is not meant to make life easier for parents. It is a virtue—like all virtues—for one’s whole life.”

Of all people, Christians should understand obedience as a virtue. After all, Scripture tells us again and again to obey the laws of God.

As Isaacs points out, there is a close correlation between obedience and justice. He explains that as the children grow into adolescence, parents need to explain to them the idea of rightful and moral authority, the need to listen to that authority and carry out its wishes, and the avoidance of a morally corrupt authority.

And if parents must use punishment to enforce obedience, Isaacs believes they should try to ensure such measures will have “positive educational results.” He frowns on corporal punishment and even on penalties like “grounding” or other restrictions. Instead, he recommends “it is better to explain, or insist firmly” on reasons for obedience.

Here many of us might disagree. A six-year-old may not fully understand such an explanation, and a disobedient 16-year-old who took the car to the store without permission may close his ears to insistence, firm or not. But if we do punish our children, we should do so prudently and judiciously.

Over the years, I’ve heard moms make threats that they don’t enforce—“If you do that again, you aren’t watching television for a week.” Incomprehensible threats, like telling a 4-year-old that if
he doesn’t eat his lunch he can’t have ice cream after supper, are also ineffective.

Consistency is also a vital part to this exercise in justice. Mom and Dad need to see eye-to-eye on age-appropriate punishment, and when it involves disobedience, the child must know there will
be consequences.

But there are other means by which parents can bring obedience and discipline to their homeschool classes.

Years ago, when my wife and I were vendors at Catholic homeschool book fairs, parents new to homeschooling often asked for advice about achieving success.

Children like routine, and a fixed time for breakfast, chores, schoolwork, and daily Mass if your schedule allows. They understand what we expect of them, and so are obedient to the rhythm of the day. If for several years you start school at 9 a.m., the children will be ready to commence at that time. If you do math just before lunch every day, they will obediently open their books when told.

Routine secretly instills discipline and positive compliance in our children.

For younger children, some promise of future rewards acts as an incentive to complete their academic studies and to willingly follow Mom’s directives. If Johnny knows he can join his buddies at the park after lunch if he first finishes his schoolwork, he will probably work harder at his lessons, including his math. If Jennie understands she must complete her work, including that composition, to join her teammates on the soccer team, she may push herself to get the job done on time.

By the time they enter high school, most homeschool students have grasped the idea of delayed gratification, recognizing that their academic work is preparing them for college, the military, or the workforce. Gentle reminders of those goals from time to time will often help keep them on the right track.

A Bond of Love and Respect

Obedience to a duly constituted and rightful authority—in this case, a parent—is a two-way street of love. Parents warn or advise their children out of love for them and to keep them from harm’s way; their children in turn recognize this intention, respect it, and try their best to comply with these wishes.

As David Isaacs concludes, “One has to reason with children so they see that they ought to obey because their parents and other authorities have the right to be obeyed. Then they will be able to obey out of love and out of a deep sense of duty.”