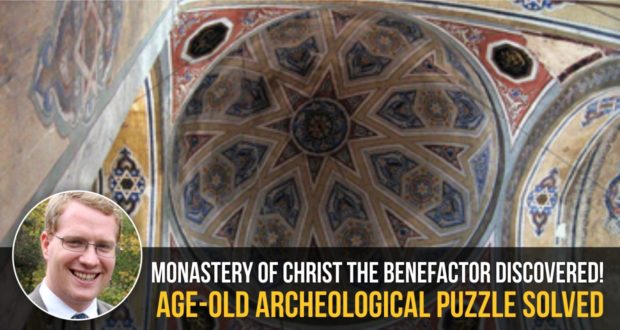 In March of 2013, Dr. Brendan McGuire (pictured above), a professor of history at Christendom College, conducted a week-long archaeological field study, focusing on the existing Byzantine-era churches of Istanbul, Turkey. It was an experience that he described as “exhilarating.”

Last month, after a year of research, McGuire presented a paper, which solved an age-old archeological puzzle, at the second annual Symposium on Medieval and Renaissance Studies at Saint Louis University. The conference featured papers by top scholars from all over the world, including some of the most distinguished medievalists from South America, Europe, the Middle East, and the United States.

During McGuire’s 2013 field study in Istanbul, which was filled with adventurous moments, he had stumbled upon Byzantine ruins, half-buried in the middle of a city block in an unfrequented, impoverished neighborhood.

“Upon my return to the United States, I began to research the area in question, and discovered that archaeological surveys dating all the way back to the 19th century had failed to include any mention of Byzantine-era ruins under the monumental Turkish bath, called Kucuk Mustafa Pasa Hamami, which sits across the street from the famous Rose Mosque,” he said.

Discovering these ruins allowed McGuire to solve a haunting question, which had troubled archaeologists and historians for decades: he identified the ruins as remnants of the Monastery of Christ the Benefactor (Christos Euergetes), and argued further that the Rose Mosque actually was the Church of St. Theodosia during Byzantine times.

Interior of the Rose MosqueThe paper, entitled “The True Identity of the Rose Mosque: Results of an Archaeological Field Study,” was well received by scholars from across the globe and is now being revised for submission to a peer-reviewed journal.

McGuire said that his ultimate hope is to contribute to a better scholarly understanding of how the Ottoman conquest affected the religious life of Constantinople, now Istanbul.

“It would also be desirable, in the future, to subject the site in Istanbul to a more complete and systematic study,” he said.

It is well known that the members of Christendom College’s faculty dedicate their lives, first and foremost, to college teaching, giving Christendom a well-earned reputation as an institution that places undergraduate learning at the center of its mission. Nevertheless, many of the professors at Christendom are also active scholars who contribute to their respective fields on a regular basis through research and writing. McGuire’s field study and research was made possible by the Faculty Mentoring Initiative (FMI), a program generously supported by several board members. The FMI assists Christendom’s professors in contributing to their scholarly fields, while also making it easier for the College to recruit and retain talented scholars on its faculty.

Niall O’Donnell is the Associate Director of Marketing & Public Relations at Christendom College. He earned his BA in English Language & Literature from Christendom College in 2003, and his License in Institutional Communications from the Pontifical University of the Holy Cross in Rome.