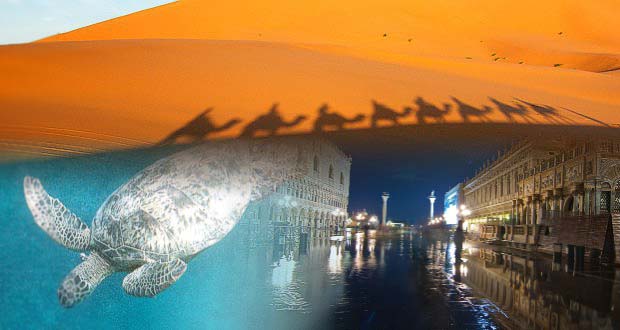 The McWilliam family was featured in the January, 2013 issue of Seton Magazine, in which we got to hear about their adventures homeschooling on the high seas.  This summer, the McWilliams are back on the water and happy to share some of their latest experiences.  Check our Contributing Writers column for more updates to their story in the coming weeks.

The last two weeks have been busy – a mix of touring, sailing, and typical cruising craziness! While in Tunisia we arranged for a two day tour of southern Tunisia which included a Roman coliseum, Troglodyte homes, three kinds of oases, the first and oldest mosque in Africa, and of course the Sahara desert! The sand of the Sahara desert is so fine it is a wonder it doesn’t fill in the Mediterranean sea!

The Troglodyte homes are where the original Tunisians – the Berbers – dwelled up until the 1960’s when the government built them new villages with “more comfortable” homes. The Troglodyte houses are basically cave dwellings which are quite intriguing. We toured one and also had lunch at a restaurant/hotel which has taken over one of the original dwellings. It is always amazing to see how some people lived! A few of the Berbers still reside in the underground homes. This is the area where they filmed some of the Star Wars movies. One of the towns – Tatouine – is the name of one of the planets in Star Wars! The “building” where Luke Skywalker grew up is an example of a typical Troglodyte home.

On the oasis front, we discovered that there are three kinds: sea, desert, and mountain. At the desert oasis where we spent the night, there were thousands of palm trees forming an “island” in the sand. We took a sunset camel ride in the Sahara desert dressed in full traditional clothing! The next morning we took a jeep trip to visit a mountain oasis – very dramatic and beautiful setting. It looked like a scene out of an Indiana Jones movie. On our drive back to Monastir we stopped to see the first and oldest mosque in Africa which was built in the 7th century AD. It is located in Kairouan, which is the forth holiest city in Islam after Mecca, Medina, and Jerusalem.

Once back on board Esprit we prepared for our next passage to Italy. Before leaving, however, and because of an unusual sound from the propeller, Chay dove the propeller and rudder to check for any damage from our bumpy encounter with the rocks at Linosa Island. He found all in good order, so we watched for a weather window, enjoyed a few meals at our favorite restaurant Le Gourmet, arranged for fuel (E0.50 per Liter vs. E4.00 per Liter in Italy), and departed Tunisia on Monday June 17th.

We picked the right window this time for we had an absolutely wondrous downwind sail to the large island of Sardinia west of mainland Italy. Once again, sea turtles were everywhere on our passage. Though this passage was much smoother than our last, it was not without excitement– at 1 AM on the first night out, while crossing the shipping channels at the northern tip of Tunisa, Chay encountered a freighter moving very quickly that apparently did not see us even with our very bright spreader lights turned on! Chay quickly turned on the engine and motored us clear of the freighter, who passed us going extremely fast and very up close and personal. About 10 minutes later we were hit by the freighter’s wake – holy cow! We all hung on as Esprit rolled back & forth from gunwale to gunwale. The rest of the passage was smooth sailing until the last 6 hours when the winds died and we had to motor. (We sailed 87% of the 180 mile passage.)

Forty-five hours after leaving Tunisia, we arrived in the small port of Arbatax, anchored just outside the breakwater, and dinghied in to check into Italy. It was déjà vu of our entry into Venice last year! No one seemed to know what to do with us. One of the customs officers got us on a little city bus to take us to the police to get our passports stamped. Fifty minutes later we were at the police station and they didn’t know what to do with us either, especially since Jamie wasn’t with us (he stayed on the boat to make sure she stayed put). After the police made a few phone calls, they drove us back to the port and took us to the Marina D’Arbatax office. Apparently, the marina office handles the paperwork for checking in, and you can’t be at anchor when checking in but must be in the Marina. So the police officers drove us to the dinghy to expedite the process and waited for us while we dinghied back to Esprit, pulled up anchor, got the fenders and dock lines ready while Katie filled out the paperwork for checking in while we entered the marina (a five minute trip). We tied off in the berth and returned to the office where, yes, we were cleared into the country. It doesn’t appear that the officials in Italy are used to non-EU/Schengen boats arriving/checking in to their country.

We decided to travel inland to get a flavor for the island which is very mountainous and beautiful, so we rented a car for a day and visited the “Grand Canyon of Europe.” Although it does not quite compare – at all – to the actual Grand Canyon, it is a very pretty gorge. It took us 3 hours round trip to hike up and down an extremely steep mountain trail – and were we sore and tired when we arrived back at the top! It was a bit more strenuous than we expected.

In between touring and sailing, Chay had to take apart and clean the Watermaker motor – a critical piece of equipment when it comes to having drinking water on board. It was full of carbon dust, the bearing was frozen, and the brushes were oddly worn. It’s a wonder that it worked this long! We’ve met a few cruisers who are heading west across the Atlantic this year as we plan to do, but for the most part the folks we have met spend a few months cruising the Med, and then settle down in a marina somewhere for the winter and wait for the next cruising season. The Med appears to be like the Sea of Cortez/Mexico – a sort of Hotel California! The weather has been cool so far this year – mid-70’s during the day; a drastic change from last year when we were burning up by the end of May – 90 during the day! Cold during night passages, but comfortable for sleeping.