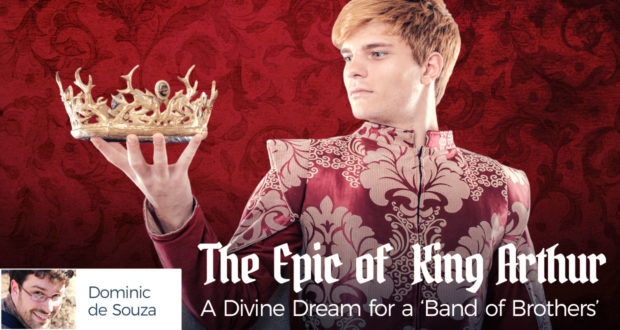 The Epic of King Arthur: A Divine Dream for a ‘Band of Brothers’

I recently picked up an edition of the legends of King Arthur, published in the 1950s. As a bright-eyed youngster, I’d doted on the myths and escapades of the Round Table, and remember being thrilled by the exploits of Sir Lancelot, the intrigues around Mordred, and the adventures of random kitchen-boys-turned-heroes.

As I grew older, and found more mature versions of the epics, I found myself disheartened at the dissolution of the Round Table and the sad affair between Queen Guenevere and Lancelot. While great battles are always good for popcorn, this time it involved the ‘morte d’Arthur’ and the death of his dream.

Being a fledgling writer, I promised myself that when I looked more like Merlin, I’d try my hand at the Aurthurian saga, and redeem it, free it of the dross that tore it apart and restore the pristine drama of heraldry, chivalry and epicness that my young heart desired.

But over the years, I realized that the Round Table was more than a collection of random stories themed around a table. Like most literary epics, it has meaning on multiple levels—literal, allegorical, symbolic, and so on.

With my last reading, I was struck by three very clear ideas.

My earliest memories of the knights’ adventures were similar to the way they were filmed in the early 20th century; in the middle of a boring day, the knight decides to go out and have an adventure for the fun of it, finds a totally random bad guy holding a bridge prisoner, dukes it out and saves the princess.

When I picked up this 1950s edition, I tried imagining it as a gritty film with bold tones and all-star actors. The tale transformed under my eyes into something that made far more sense.

My paradigm shifted into a world not settled in peace, with the occasional armored baddie waiting at the crossroads, but a landscape criss-crossed with the chaos of post-Roman conquest. With the gradual growth of local order, and the amalgamation of authorities into greater central powers, independent castles and strongholds fought to maintain their grip on land, borders, fields, farms, people and lineage.

Some of the stories recount Lancelot taking on a Red Knight, who is brother to a Green Knight farther down the road, who are both related to the Blue Knight, all who serve the Black Knight. Instead of sounding like a multi-level Xbox game, I imagined it as a tiered, medieval mafia (and there were plenty of those).

Rather than a book filled with random injustices, I imagined an elite Christian corps riding around trying to bring order in a demi-Christian world, where pre-Christian paganism and post-Roman philosophy sought to continue their ages-old traditions.

Thought of this way, it starts to read more like ‘Band of Brothers’ behind enemy lines.

One of Arthur’s many traditions involved his Pentecost Fast: when the feast rolled around, it was publicly proclaimed that he would not eat until an ‘adventure’ be brought before the Table Round, and someone dispatched to resolve it.

The more I thought about it, the more I realized what an incredible act this was. Effectively, the entire people knew that they could petition him with their worst situation, and he would force himself to listen to it before satisfying his hunger, even if it took all day.

Imagine if a modern authority figure made it known that he would not rest until he repaired another injustice against law and goodness.

What a different world this would be.

3. The Breaking of the Round Table

The inclusion of Lancelot and Guenevere’s affair, and also the character of Mordred in the epic, are multi-layered devices, but I think in their simplest form, they hearken back to the role Judas played in the life of Christ.

Judas was the cankerworm who could have been a saint, but chose the weaker path of money and prestige. His choices brought about the capture and execution of Christ, despite the repeated attempts to inspire him to remain good.

Judas stands as an example to all those who start great and noble endeavors. A society, or a system, is like a macro version of Man, and therefore imbibes his aspirations for virtue and his concupiscence (attraction) for sin. The story of Arthur is an archetype echoing the 12 apostles; there will inevitably be some who are not wholly passionate about the core virtues, but are stained by love of money, power, prestige, and so on.

It’s a great example to moderate the magnificent dreams we may have of creating a Heaven on Earth, because that’s what Arthur’s vision might have been. All endeavors are directed by concupiscent men, and likely endure a series of elliptical falls and rises to and from grace.

Certainly many pixels and ink have been spilled over the themes and thoughts of the Aurthurian epic. It remains high on our reading lists because it is a charming and inspirational series of tales that impart the ideals of chivalry, courtesy, nobility, and hierarchy. But it is also an elaborate wake-up call for those of us who are tempted to idealize an earth-bound utopia, even one founded on the principles of Christianity itself.

Because the first thing that Christianity and Arthur tell us is that we are fallen, in need of grace and never perfect. In this life we may dream divine dreams, but they can only be made real when we finally awake in our true home.

So, your turn now: who’s your favorite King Arthur character?

I am a pipe-smoking, sword-wielding, book-loving Catholic author, who loves writing, reading and illustration. I’m a hobbit at heart, but I live in Gondor, and send home stories from the frontlines. I’m married, and work as a graphic designer for Seton Home Study School.  My website is www.catholicauthor.us