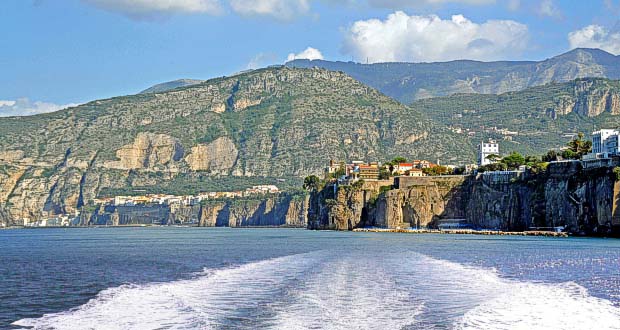 The McWilliam family was featured in the January, 2013 issue of Seton Magazine, in which we got to hear about their adventures homeschooling on the high seas.  This summer, the McWilliams are back on the water and happy to share some of their latest experiences.  Check our Contributing Writers column for more updates to their story in the coming weeks.

We now know that wishing someone “following seas” isn’t necessarily a good thing… after spending a few days in Mgarr Marina on the Maltese island of Gozo–a spot that we fully enjoyed, and having the best dinner we’ve had in a very long time at Sammy’s Restaurant on the waterfront, we left Malta as planned on Thursday, June 6th.

All the weather forecasts were predicting winds of 15 to 20 knots from the East (behind us) and slight 0.3 meter seas, which should have been a wonderful down wind sail. However, after about 4 hours, we realized that we were experiencing gale force winds! The morning weather report at 6AM didn’t mention anything about a gale, but the 10:00 AM weather report did – those weathermen sure have difficulty predicting the weather in the Med. The seas were soon extremely rough and our nice down wind sail with following seas was anything but! As best we can determine, we saw up to 40 knots of wind and 7 meter seas. We were dreading a night time passage in these conditions!

Anyone who says “miracles don’t happen,” hasn’t been paying attention. While saying the Rosary to himself in the late afternoon, Chay passed the navigation station and our chart and just happened to notice that there was a very little Italian island (not much bigger than Alcatraz) about 5 miles off our rhumb line (path of travel derived from initial bearing), to which we could possibly detour as a safe haven. We quickly looked up Linosa Island in our cruising guide, and yes, there was a small bay on the west side of the island that proved to be an excellent port of call to escape the “ick” we were experiencing. We anchored in one of the two small bays with the fishing boats also escaping the gale and settled in for the night.

Unfortunately, while the anchor held well, the wind shifted and we swung around into an area with small boulders on the bottom. We were awakened at 1AM to a large banging/crunching sound – not good! We got up and checked everything, then brought in some anchor chain to pull us away from the rocky area. This only worked for a short while until 3 AM when we hit the rocks again. This time we woke up Jamie, pulled up anchor and moved into the other small bay. Now mind you, it is pitch black out, and the bay we are moving to is Y shaped and surrounded by reef and rocky shores. In the morning it appeared that we couldn’t have anchored more perfectly if it had been broad daylight.

The next day, we took a walk around the little town and explored this small Italian island, before leaving for Tunisia in the late afternoon. By now the winds had dropped to 10 to 20 knots out of the Northwest and the seas had calmed. We had a beautiful upwind close-hauled sail until the off shore breeze from the Sahara desert turned the winds more westerly, when we tacked north to get back to our rhumb line where the winds had shifted back more northerly and we were able to continue close-hauled to Tunisia, where we arrived the next day around 4PM.

Although we had a “reservation”, no one answered our radio call announcing our arrival… So, as recommended in our cruising guide, we tied off to the fuel wharf and were quickly greeted by Immigration Police who guided Chay to their office to check us into the country. The Customs officials decided they needed to board the boat to confirm what we declared. Once everything was confirmed to be as Chay stated they asked for “baksheesh” or a small gift – 2 bottles of wine and 4 packs of cigarettes which we bought in Malaysia (2010). We bought the cigarettes to use for this purpose in the Red Sea. So after a typical third world check-in, we are now berthed in Marina Cap Monastir where we will explore the area on land and stay until the next good weather window (hopefully next weekend).

One of the reasons we came to Tunisia is to reset our Schengen visa, as well as to visit another country and get cheap fuel. Restaurant prices are extremely reasonable – cheaper than eating on-board Esprit! The officials are friendly, and the locals appear to have mixed feelings towards America. Many cruisers and locals have stopped on the dock to chat. Some love Obama, and others aren’t quite so enamored with our US flag. From what we have observed here, Tunisia is a Moslem country which has a bit of western/European influence, much like Turkey.