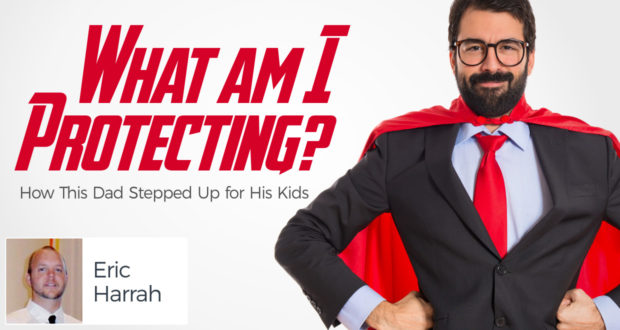 What am I Protecting? How This Dad Stepped Up for His Kids

I think sometimes God has a rather twisted sense of humor. Take the role of Dad. According to the Catholic Church, the father is meant to be the provider and protector of his family.

Provider. Okay, I got that one: I go to work, I make money, the wife buys groceries, we eat. Provider? Check!

Protector. Okay, I work out, I try to keep myself healthy by not eating a bunch of stuff I shouldn’t, and I at least have some passing knowledge of self-defense. But, is that what He really means? Fighting bad-guys when they show up at the door and try to do awful things?

Perhaps He did in the days of old when barbarians rampaged across the countryside, burning and looting in the wake of the fall of the Roman Empire. Or in later years, when Crusaders were called to rise up to fight Muslim invaders bent on destroying Christendom. Boy those were the days.

Battle was pitted, steel against steel, your strength against the strength of the enemy. One of you won and one of you lost. The winner went home to his family and the loser, well, they didn’t always turn out so well. But is that what God means?

This has been something I have wrestled with for years, long before I even had kids. Of course, in the early days of my wrestling, I was still very much living in the world. I wasn’t putting God first; I certainly wasn’t putting my family first. I was providing for them, but was I protecting them?

No one was trying to hurt them, or at least that’s what I thought. After all, I watched the kids and made sure they were safe when they played. Nothing awful like you see on the news from time to time ever happened to them, so I must be doing my job, right?

As I later came to realize, I couldn’t have been further from the truth.

I started to better understand my role as protector sometime around late fall of last year. When my wife and I received the giant box of homeschool goodies, we anxiously dug into it. Flipping through books and admiring the worksheets and syllabus, it seemed like an enormous amount of information to get through in a year!

As it turned out, it wasn’t all that bad. But our initial anxiety led us to take short cuts early on in areas where we thought maybe we could skip a subject for a time, or just do the bare minimum.

Unfortunately, since I was the one who was supposed to do it, and since I wasn’t doing the best job in my role as homeschool helper early on, Religion suffered the most. I was really bad about not sitting down and just going through the lesson every day.

“You need to be doing this!” I would yell at myself. “Ah, I’ll get to it tomorrow!” I would always respond. But then days turned into weeks and weeks turned into months. Before I knew it, half the school year was gone.

Looking up from my coffee one morning, my wife peered over at me and smiled. “You know you need to get the kids’ Religion done. You’re so far behind, you might never catch up! If you want me to help, I can.” She was right, as always. She’s smart like that.

Of course, there were other things going on, I’d always say. Our life last year was busy. But I used it as an excuse.

By the time January rolled around, I realized I had done very little and the summer wasn’t very far away. I knew it was now or never. I either had to commit to sitting down and doing this with them every night, or relinquish my role and admit defeat.

“Never!” I cried as I charged blindly forward!

It took almost a month, but we finally got into a good habit of going through the Religion lesson every night before bed. At first it was rough; I was always tempted to skip it. But eventually I found that I really enjoyed it. We would talk about God and answer their questions. Kids can come up with some truly astonishing questions and even more astonishing answers!

As we read through the course, I finally realized something. My biggest and most important duty as a parent is to get my kids to heaven. It was funny; it was such a simple statement, and it made complete sense. And yet, somehow I had never thought of it before? I felt silly.

How could I have been raised Catholic, and never have considered the real duty of a parent to be the salvation of my child’s soul?

And then I knew. That was it. That was what it meant to be a protector. To guard my children’s innocence, to protect their minds, bodies and souls. That to fail to guard any of those three was to fail in my duty as their guardian and protector.

And more importantly, as a dad, my role as protector meant providing them with the wisdom and knowledge of God’s truth and preparing them to face their own battles in the future. Just like all of us, they too would one day have to fight against the powers of the world.

And what a fight it is.

I never realized until I started down this journey how taxing at times that battle can be. The devil comes at you from every angle.

And just when you think he’s withdrawn for the night, he sneaks in over the wall and strikes at you again. He is vicious and unrelenting. He wants our kids and he’ll stop at nothing to get them!

But then, God made them a protector and they all call him Dad.

Eric Harrah lives in the panhandle of Florida with this wife Elaine and 5 wonderful children, Clarity 7, Liam 5, Evie 4, Everett 2 and Zoey 0. Eric is new to the writing world with several full length creative novels in the works targeted towards young adults. Eric works as an Electrical Engineer for the Defense industry, when he isn’t busy writing. In between, Eric is a martial artist, musician and beach-goer. But more than anything, Eric loves spending time with his kids, teaching them all the wonderful things God’s world has to offer.