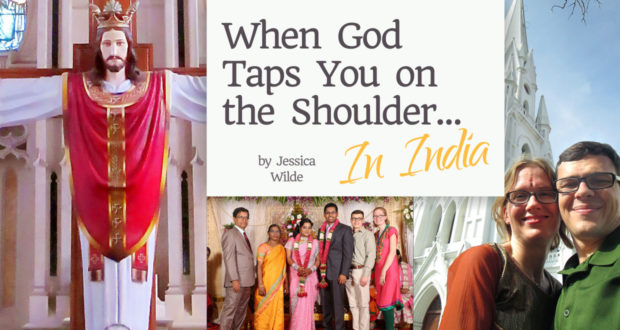 When God Taps You On the Shoulder… In India

“They’re throwing rocks at us!” I whispered to Jason as I grabbed his hand.

We were invited to India for a friend’s wedding. It was an amazing experience—the music was loud, the food spicy, the colors vibrant, and the hospitality overflowing to make us feel like family. 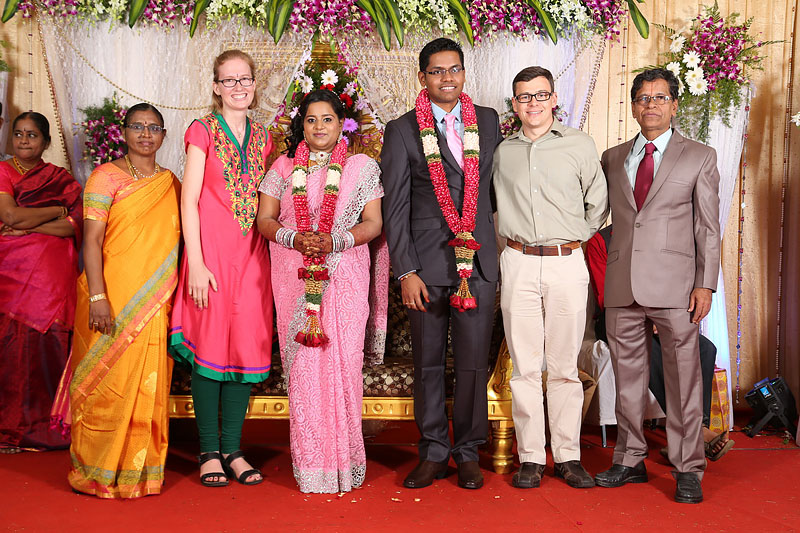 The next day, we visited a little known basilica that is very special for us Catholics.

After being filled with the Holy Spirit at Pentecost, the Apostle Thomas was called to India where he spread the Gospel. He converted thousands and built many churches before being martyred on what is now called St. Thomas Mount in Mylapore, or modern day Chennai. 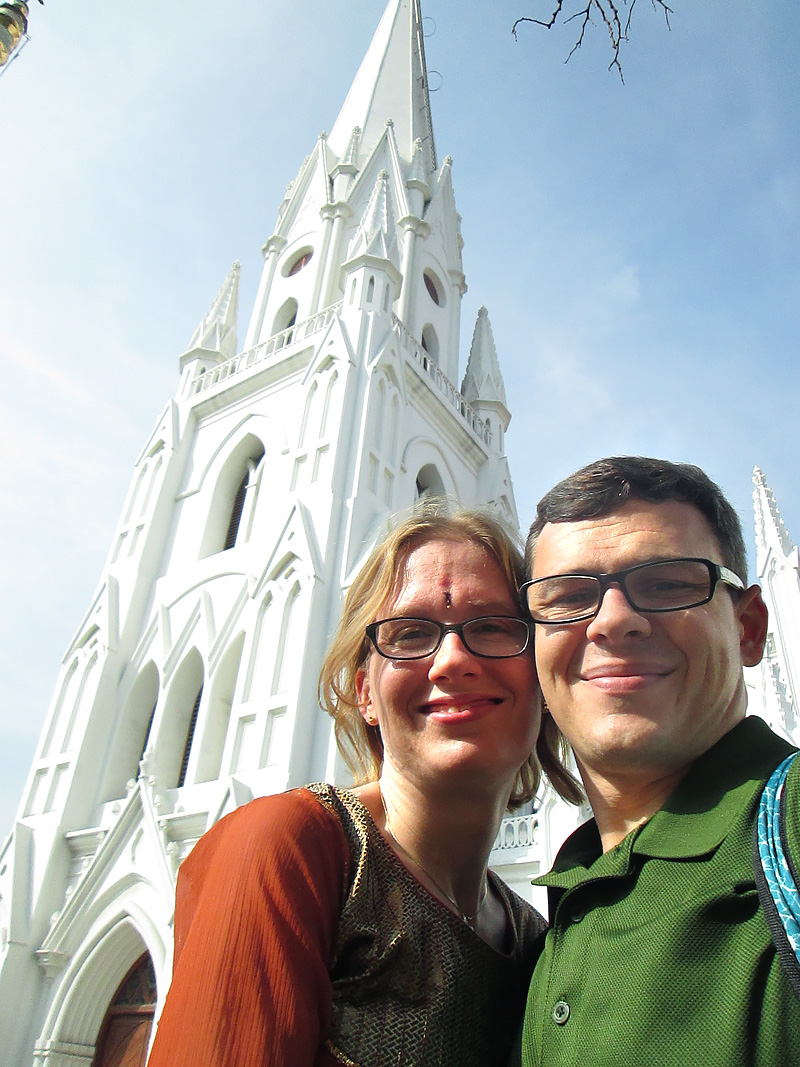 He was buried nearby on the site of the modern Santhome Basilica. Santhome is one of only three basilicas built on the site of an Apostle’s tomb—the other two are St. Peter’s Basilica in Vatican City and the Cathedral of Santiago de Compostela in Spain, where St. James is buried.

Santhome Basilica is an impressive white edifice that contrasts with the surrounding mix of grey concrete buildings. Before entering the church, everyone removes their shoes and leaves them outside on the covered porch—a sign of respect in India. Even the priest and altar server have bare feet during Mass. 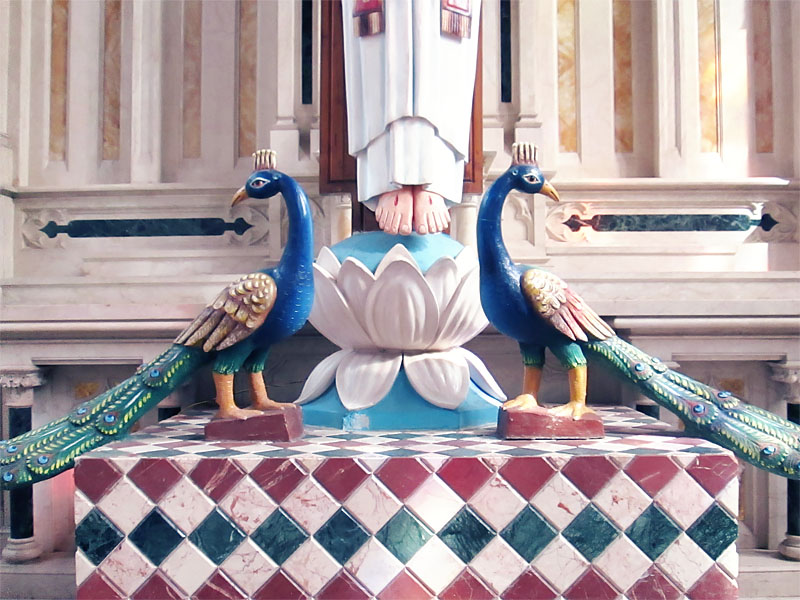 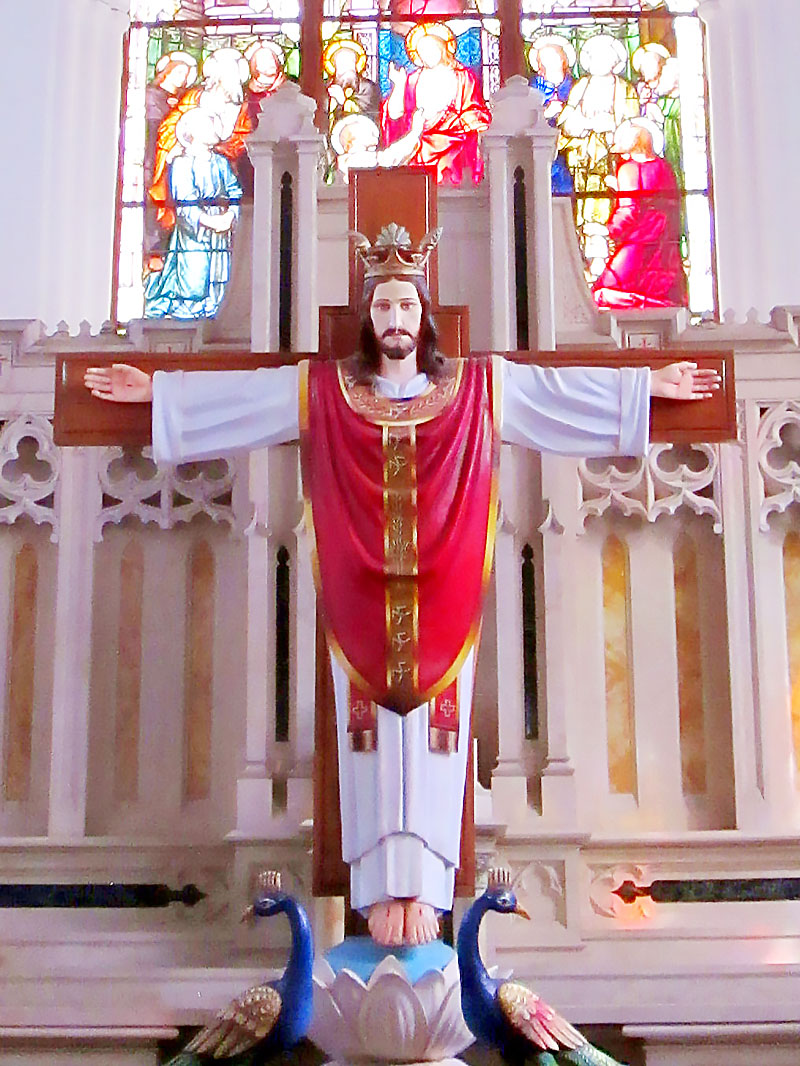 Behind the simple altar is a large crucifix with two colorful peacocks at the feet of Jesus. Mylapore is known as the city of peacocks (mayil), and so even this symbol has been embraced by the church. The Basilica itself is naturally lit and air conditioned due to the cost and shortage of electricity. In fact, the power is completely shut off until seconds before the priest rings the bell for Mass. Despite this frugality (or because of it), they feed the poor on a daily basis through a soup kitchen.

Underneath the altar is the real treasure, the tomb of St. Thomas. Before entering the tomb, pilgrims walk through the museum next door where many amazing artifacts are on display, including the spear tip that killed St. Thomas and the fingers of Thomas which may have been put in Jesus’s side. 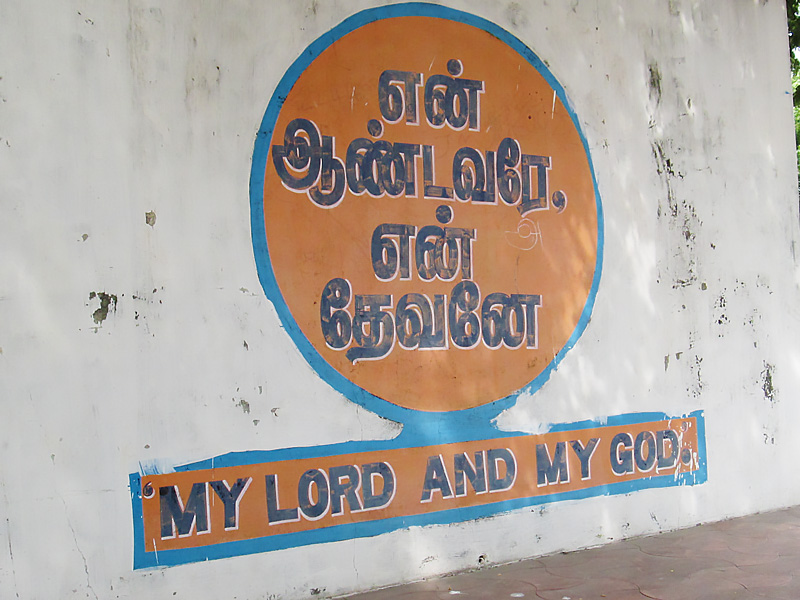 Just before entering his tomb, there is a beautiful picture of St. Thomas putting his finger into Jesus’s side and saying, “My Lord and My God.” While most people refer to St. Thomas as “doubting Thomas,” the people of India honor him as the first to declare Jesus as his God after the Resurrection.

Behind Santhome Basilica was a small sign directing us toward the beach to see the “St. Thomas Post.” Having no idea what this was, our curiosity drew us in. On the way to the beach, we walked by a couple of wild dogs and then a group of teenage boys playing kickball.

A legend says that the post was placed by St. Thomas at a point where he proclaimed that the sea would never pass. Apparently, this post gained some popularity after the basilica was miraculously spared during the tsunami in 2004, while the surrounding area was completely destroyed. 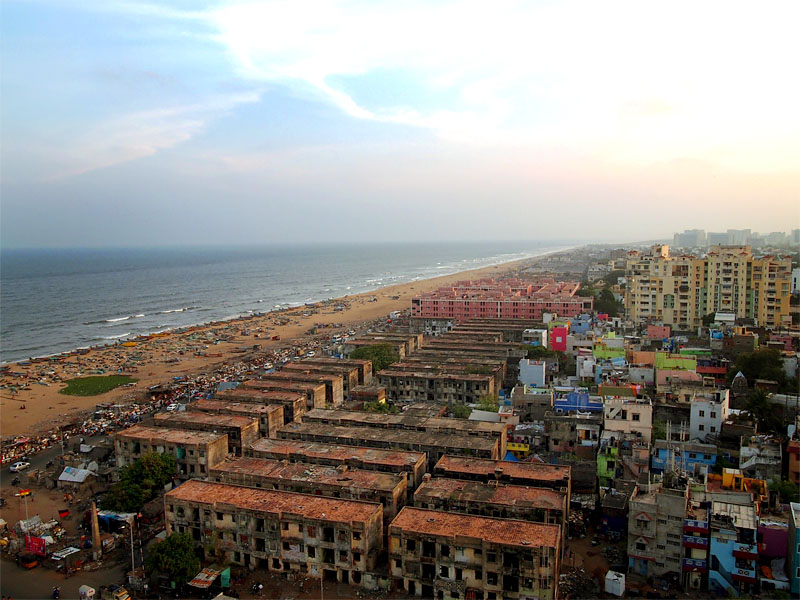 While this post would have been interesting by itself, it was the surrounding scene that stunned us. All around, the beach was covered with makeshift huts, smaller than most camping tents and covered with recycled advertising banners, in which countless people lived on the beach. Throughout our trip, we knew there was extreme poverty, but this was the first time it really took our breath away.

On the way back to the Santhome Basilica, I felt a prick on my back, followed by another. “They’re throwing rocks at us!” I whispered to Jason as I grabbed his hand. Without missing a step, we miraculously kept our composure, never looked back, and kept walking. It was only a few rocks before we were out of danger, but those tense seconds brought much reflection.

The poverty on the beach was shocking. But then this…it was as if each rock was God knocking on our hearts and telling us to open our eyes to the poverty and needs in India and around the world. Sure, we drive by the old man at the street corner and it tugs at our hearts, or maybe we wonder how bad it really is for him, but it wasn’t until this moment that God got through to us.

And then the Holy Spirit guided us forward, keeping us calm in a scary situation. Through prayer and reflection, we discerned God’s will and were ready to act. 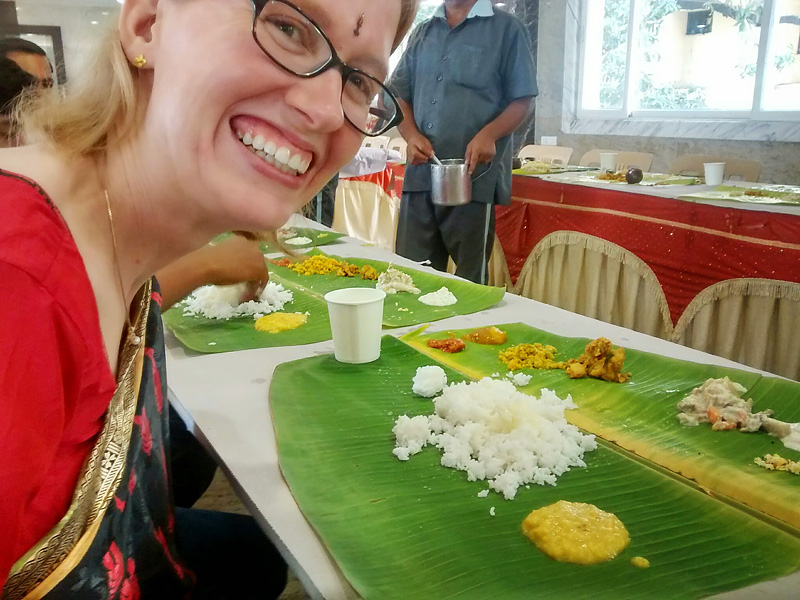 Soon after, we began making “Mother Teresa” bags as a family. The kids decorate paper bags with markers, crayons and stickers. We then fill the bags with canned sausage, fruit, juice and a treat. These bags stay in our car and whenever we see someone in need, we stop and give them a sack lunch.

The smiles we get in return fill us with joy and show our kids that we can make a difference in someone’s life.

“If you can’t feed a hundred people, then feed just one.” – Mother Teresa 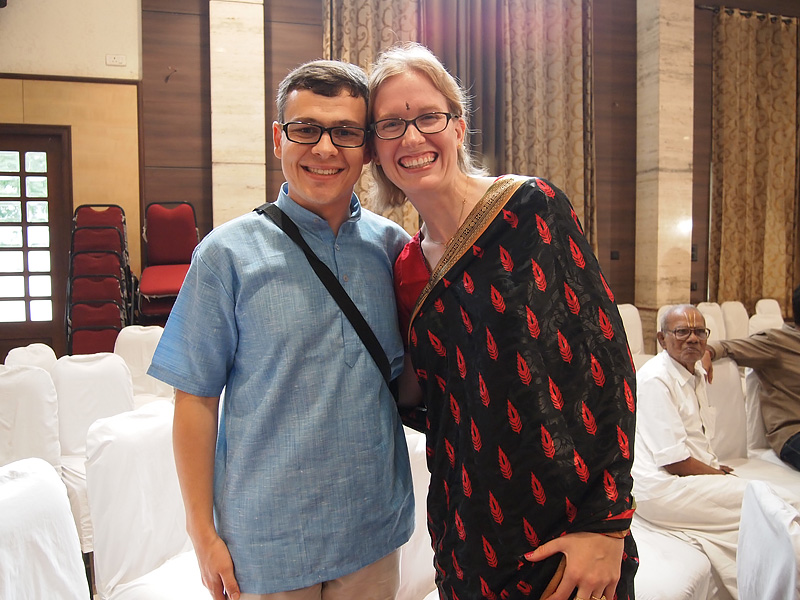 Don’t miss Seton family feature on the Wilde’s: Journey to A Simpler Life: The Unexpected Joys of Becoming a One-Car Family!

Jessica is a homeschool mom and traveler. She and her husband Jason live in Austin, Texas with their three children, Grace, Brecklyn and Alex. Together they strive to live a simpler life with a focus on spending time together and seeing God’s world. Through travel and Seton, they teach their kids to appreciate and love their neighbors around the world. Follow the Wilde family