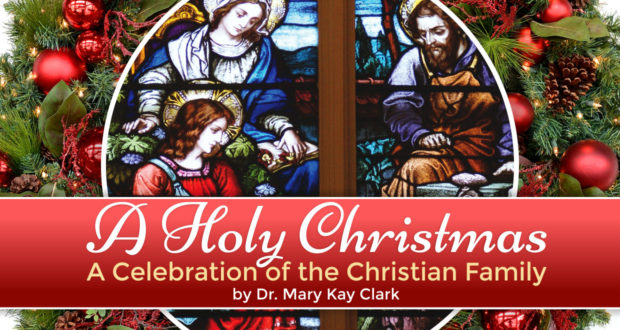 A Holy Christmas: A Celebration of the Christian Family

We spend the month of December thinking about and planning for Christmas in one way or another. With all the hectic activity of December—preparing for Christmas parties, buying gifts, cleaning the house—it’s easy to forget that we should mainly be preparing our hearts, souls, and homes for the birth of the Christ Child.

God could have become man without being born into a family. He could have simply appeared from nowhere, having no familial attachments, and preached the word he wanted to bring. Because He chose to come as a baby, and grow up through childhood into manhood in the midst of a family, we need to consider that God means to teach us something important through the family life of His Son Jesus Christ.

Though we do not know many details about the early life of Jesus in His family, we do know that he was “subject” to his parents, meaning that He recognized the authority of His parents and obeyed their directives. This certainly gives children and adults a model to follow. So many times in life, we feel that we know better than those in authority, and we can come to resent following orders that don’t make sense to us. Jesus certainly “knew better” than those He obeyed, but He obeyed anyway, giving us an example to emulate.

It is certainly not coincidental that the first miracle of Jesus was at the request of His mother. And the fact that it occurred at a wedding feast is also significant. We see in this event not only the honor due to a mother, but also the honor due to marriage, which is intimately bound up with motherhood and fatherhood.

The Catechism of the Catholic Church tells us that “grace is a participation in the life of God” (#1997). While all the sacraments bring us this grace, marriage allows a further participation in the work of God. God creates human beings so that He may love them, and they may love Him. But God relies on human beings to participate in this creation. In marriage, the spouses share in the creative activity of God; and not merely in the creation of new people, but also in the creation of new Christians, through the Baptism of their children and bringing them up in the Faith.

We see in Christmas not only the celebration of the birth of the Christ Child, but also the celebration of the Christian family. As the Holy Family sheltered in the barn in Bethlehem, they simultaneously had little and everything. They had little shelter, little food, little clothing. But they had the love and support of each other, which was everything they really needed.

In our own Christian families, and especially in homeschooling families which often have only one income, we may experience similar material deprivations. But we can experience the same love and support which characterized the Holy Family.