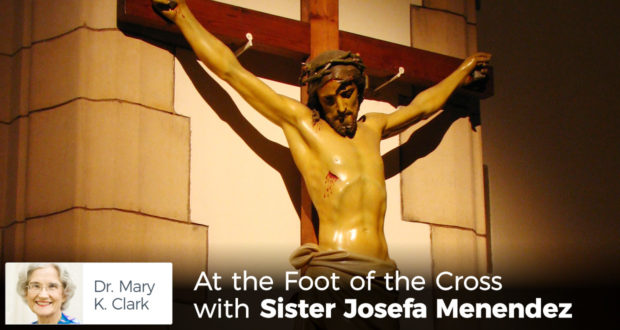 At the Foot of the Cross with Sister Josefa Menendez

While Jesus walked the long, slow journey carrying His Cross, and falling three times, the people in Jerusalem must have spread the word like wildfire among their neighbors and in outlying areas.

During those three hours He hung on the Cross, people must have been arriving in droves. Many of those who recognized Him as the Son of God were surely horrified. Others who believed in Him were perhaps faint with depression.

The crowds saw Jesus’ sufferings and His Wounds. The gathered thousands heard His last words on the Cross, surely among the most important words He ever uttered.

But what about those millions who were not present and who would learn of His words in the future? What words did He have for all of us who were yet to come?

Over the centuries, Jesus appeared to many and told them about His sufferings on the Cross. One person to whom He appeared in 1923 and revealed His sufferings was Sister Josefa Menendez, a Sacred Heart nun in France.

Pope Pius XII gave his approval to her visions and to the book in which she recounts her visions of Christ and His words to her, The Way of Divine Love.

The Way of Divine Love

In The Way of Divine Love, Sister Josefa says, “At about six in the morning when at prayer, I saw Him as during the night, but a red mantle had been thrown over His white tunic. He seemed utterly spent.

At once, He said to me, ‘Josefa, My enemies are soon going to load the Cross on my shoulders. It is so heavy…. I have made my sufferings known to you…follow Me in them…accompany Me and share in My agony.’”

Later, Jesus reappeared to Josefa. She says, “His face was torn, His eyes swollen and filled with blood… He let me kiss His feet at the seventh, the eleventh, and the thirteenth Stations, and before leaving, He said to me, ‘The hour of the crucifixion is approaching.’”

Visions of the Christ

“Towards half past twelve, I saw Him again…His tunic had been wrenched off half His Body…Then such an agonizing pain shot through my hands and feet that my whole body was shaken…. At the same time, I heard the strokes of the hammer, slow and resounding afar…In a faint and dying voice, He said these words: ‘Now is the hour for the world’s Redemption! They are about to lift Me up as a spectacle of derision to the crowd… but also of admiration to souls.’”

“I saw Him a few moments later. He was fastened to the Cross, and it had been lifted up erect…. The Crown of Thorns encircled His brow and great spiky thorns furrowed deep into the flesh. One longer than the rest had pierced its way through His forehead and emerged near the left eye which was much swollen. His face, covered with blood and filth, leaned forward a little to the left. Though His eyes were very swollen and bloodshot, they were open and gazed earthwards.

“All over His wounded body were to be seen the weals and welts caused by the scourges which in some parts had torn away fragments of flesh and skin. Blood flowed from His head and from His other wounds. His lips were purple and His mouth slightly twisted…The sight was so pitiful that it wrung my heart with compassion…what caused me most sorrow was that He could not use a hand to touch His face.

“I also noticed as I gazed at Him on the Cross how they had torn away His beard. It had given such majesty to His face…and His once beautiful hair, which used to add such grace to His person, was all matted, tangled, and clotted with blood, and falling across His face.”

The sight of Jesus “nailed hands and feet” greatly moved Sister Josefa and gave her “strength to leave all and to submit to His Will in everything, however costly.” Jesus declared, “Peace has come to the world!… The Cross, hitherto an instrument of torture on which criminals were made to die, is changed into the light and peace of the world, and the object of the most profound veneration.”

“Sinners will draw pardon and life from My sacred wounds. My Blood will wash away and efface [erase] all their filth and foulness.”

“Pure souls will come to My wounds, there to slake [satisfy] their thirst and kindle flames of love in their hearts… there they will find a refuge, and for ever make a home.”

In addition to offering us a refuge at the foot of the Cross and in His Sacred Wounds, Jesus also addressed His Blessed Mother on our behalf. “O Mother Mine!… These are my brethren, keep them, love them.”

He left us with these words: “You for whom I died are no longer alone; you have a Mother to whom you can have recourse in every necessity.”

May we, with the Blessed Mother, abide at the foot of the Cross and gaze upon Our Crucified Lord during this holy season of Lent.