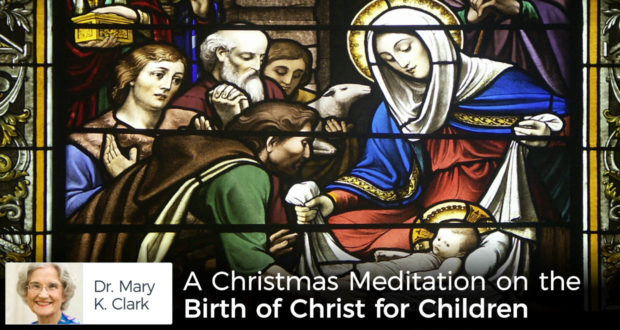 A Christmas Meditation on the Birth of Christ for Children

Editor’s note: This Christmas, gather your children around the nativity scene, and join Dr. Clark in this little meditation by reading it aloud. She will take you on a journey of wonder around the creche, helping you to admire the incredible miracle of the Birth of Christ.

Children of all ages can learn about meditation, a tool for restoring our joy in the things of God. “But when we think of divine things, not to learn, but to make ourselves love them, this is called meditating,” said St. Francis de Sales.

Since there is a history of military service in the Clark family, we hope you won’t mind that she has included her family tradition of soldiers at the stable. After all, God calls every man and woman from all walks of life to Himself.

The Birth of the Christ Child, the Incarnation of the Son of God, is an event that is so overwhelming in its full meaning that none of us can truly comprehend it. In the Gospel of Luke, when the angel asks Mary to conceive the Son of God, Mary asks, “How can this be?”

The event of the human birth of the Son of God is so powerfully overwhelming in its demonstration of the immense, immeasurable love of God for each individual person ever created that we are forced to ask “How can it be?” How can we ever understand this unimaginable event?

How can it be that the Son of the Eternal God, the Creator of the Universe, would come to the earth He created? He made the brightly-lit stars and the iridescent moon. He made the brilliant sun so greatly shining we cannot even look at it! He made the countless colored flowers and the huge evergreen trees and the sequoias whose tops reach the clouds. He made the wide rapid rivers and the huge oceans with their ever-flowing waves perpetually hitting the shores.

How is it that this great God of all creation, this God Who had no beginning, Who has no end, would reduce Himself to a tiny speechless, helpless Babe in a cradle of hay in a dark barn on a cold night? How is it that a young girl not yet a woman should bear this inexplicable God become Man?

How can it be? Who can explain the unexplainable?

Yet, God so loved the world that He gave us His only begotten son, born of a humble young woman without fine dress nor residing in a castle. Instead, she lies in a hay-strewn stable surrounded by four-legged creatures. The cud-chewing cows, bleating sheep, and impatient horses warm the stable with their heavy breath.

As Mary lies on a pillow of hay, her delicate pink face shows a bright smile beyond any earthly beam.

Her husband Joseph, the young foster father, whose rough carpenter hands are become tender with love, caresses the Son of God in the arms of his wife, Mary.

Three young shepherd children silently enter the stable with their eyes fixed on the radiant Child and kneel before the Babe and His mother, laying their new-born lambs at her feet.

Hovering above the human figures are angelic creatures with powerful wings, beating the gentlest music like soft violins that have yet to be made. These angels sing a heavenly melody with words incomprehensible to earthly creatures.

The sound of horses and boots and metal are heard outside as three Roman soldiers appear at the stable door to offer obeisance to the newborn child and gifts of fresh bread to the head of the humble family.

Three crowned men in red velvet capes topped with white fur enter the stable and advance on their knees with heads bowed low, carrying gifts that glow like gold and diamonds in the soft light emanating from the Child.

In the peace of this holy stable, young Mother Mary starts humming a soft tune and, just as softly, Joseph, the shepherds, kings, children, and soldiers join in the gentle melody.

As the song comes to an end, the Baby in His Mother’s lap turns toward each person, and holding up His right hand, He seems to bless them as His Mother says clearly “Some day, you shall be with us in Paradise.”