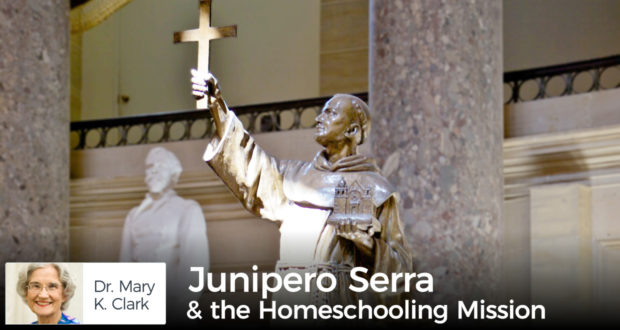 Our current Pope took the name Francis because of his desire to follow St. Francis to help the poor. It is not unexpected, therefore, that when the Pope visits the United States in September, he intends to canonize a great American Franciscan priest, Blessed Junipero Serra, who dedicated his life to helping the poorest of the poor, the native Indians of the Americas.

Junipero was born in 1713 and grew up on an island off the east coast of Spain. Junipero’s family lived in a farming community where children helped their parents on the family farm.

Junipero was fortunate enough to be able to attend daily classes for boys at the church school nearby, and was soon recognized for more advanced intellectual ability. At sixteen, he decided to become a priest, and after attending a seminary for several years, he became a Franciscan priest in 1737.

Father Serra spent twelve years as a seminary professor preparing young men to be priests. During this time, he became an excellent and enthusiastic speaker and teacher. Crowds of people would come to hear his sermons.

Father Serra arrived in “New Spain” or Mexico, in 1750. However, on the trip, he was bitten by a poisonous insect. This caused a permanent ulcer on his leg, which led to constant pain, a limp, and sometimes total weakness. Nevertheless, he began learning about life among the Indians, and the many diseases that the Indians and priests contracted, such as malaria and smallpox. (It was not unusual for all the missionaries at a mission to die from diseases and lack of food.)

Father Serra helped various tribes of Indians over many years, living through several Indian attacks. He taught the Indians who lived with the missionaries about Jesus and the Catholic Faith.

He also taught them farming skills, which helped them to live without constant stealing and fighting among themselves. He and the other Spanish missionaries brought seeds and taught the Indians to grow corn, beans, squash, and sugar, showing the Indians how to irrigate their farmland, as well.

Father Serra and the Franciscan missionaries taught the Indians how to buy and sell their farming products, how to trade for oxen, goats, cows, and pigs, and how to make farming implements. The priests encouraged the Indians to learn to read, to produce plays, and to participate in religious processions. While the Franciscans hired architects, the Indians learned building skills and built many small Spanish-designed churches. Small Indian towns grew up in Mexico and in places to the north and to the south.

From 1758 to 1767, Father Serra was once more assigned to teach classes in a university, this time in Mexico City. However, in 1767, the Spanish king ordered all the Jesuit priests out of the Spanish territory in South and Central America, replacing them with Franciscan priests. Thus it was that Father Serra was sent to be a spiritual leader among the Indians in the present California area. Father Serra established ten missions in the California area where he taught the Indians practical skills as well as the Faith.

Food produced by the Indians often was taken to provide for the Spanish soldiers, leaving little for the priests and the Indians. Father Serra was known to have said that the Spanish government literally raided the missions and even destroyed the churches if the soldiers needed the building materials.

What might we home schooling parents be able to learn from Blessed Father Junipero Serra and his work among the American Indians?

Catholic homes, like little missions, should be places where the Faith is taught and practiced. Unhappily, we need to teach ways to practice the Faith in a society which often rejects our values.

As Father Serra ensured, our homes must be places where our children can learn practical skills for daily life as well as skills to help them in future careers in a non-Christian culture. Like Father Serra, we need to teach the Faith, mostly by good example, to others in our community.

We should ask for the blessing of the holy Junipero Serra on our Catholic home schooling missionary work in our family and in our community.