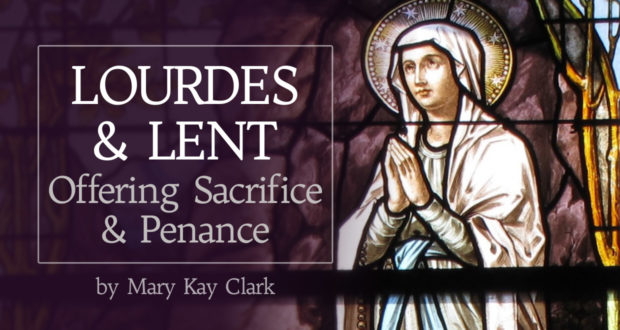 On February 11th, we celebrate the feast of Our Lady of Lourdes. Our Blessed Mother appeared to St. Bernadette, a fourteen-year-old girl, in Lourdes, France, in 1858.

Our Lady appeared in a small grotto where Bernadette was searching for wood. Bernadette described the vision to her pastor: “I saw a lady dressed in white. She wore a white dress, an equally white veil, a blue belt, and a yellow rose on each foot.”

Bernadette, on the request of her pastor, asked the Lady her name. The Lady replied, “I am the Immaculate Conception.”

Though the Church had recently declared the Blessed Mother as the Immaculate Conception as an article of Faith, most Catholics were not aware of it, and it had never been taught to Bernadette in her catechism class. The pastor immediately recognized the truth of the apparitions.

As we begin our Lenten devotions and sacrifices, let’s think about the words of Our Lady. Several times the Blessed Mother has appeared to give the message to all of us to pray and do penance for sinners. In many of her appearances, she has carried a rosary or worn a rosary.

“I do not promise to make you happy in this world, but in the other.” These words of the Blessed Mother to Bernadette reassure us that our sacrifices and sufferings in this world are for an important reason, to help others in their struggles to find Jesus and His generous love for all of us.

On July 2, 1957, His Holiness Pope Pius XII wrote an encyclical letter to celebrate the 100th anniversary of the Apparitions of Our Lady of Lourdes. The following is a quote from the encyclical:

“Our thoughts turn also to Christian families, to ask them to remain faithful to their vital mission in society. May they consecrate themselves in this jubilee year to the Immaculate Heart of Mary! For married couples, this act of piety will be a valuable aid in performing their conjugal duties of chastity and faithfulness. It will keep pure the atmosphere in which their children grow up. Even more, it will make the family, inspired by its devotion to Mary, a living center of social rebirth and apostolic influence.

“Beyond the family circle, professional and civic affairs offer a vast field of action for Christians who desire to work for the renewal of society. Gathered about the Virgin’s feet, docile to her exhortations, they will first take a searching look at themselves and will try to uproot from their consciences any false judgments and selfish impulses, fearing the falsehood of a love for God which does not translate itself into effective love for their brothers.

“Christians of every class and every nation will try to be of one mind in truth and charity, and to banish misunderstanding and suspicion. Without doubt, social structures and economic pressures of enormous weight burden the good will of men and often paralyze it.

“But if it is true, as Our predecessors and We Ourselves have insistently stressed, that the quest for social and political peace among men is, above all, a moral problem, then no reform can bear fruit, no agreement can be lasting without a conversion and cleansing of heart.

In this jubilee year, the Virgin of Lourdes reminds all men of this truth!”