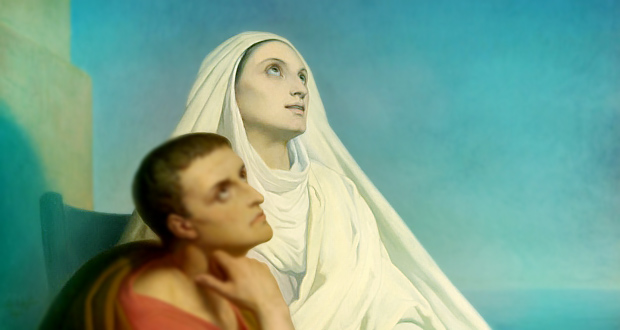 Monica was born in 332—only 300 years after the crucifixion of Jesus—in Tagaste, currently Algeria, in North Africa. She had an excellent Catholic upbringing by her parents, and practiced her faith with great devotion. An elderly Christian servant lady also dedicated her life to teaching Monica and her sister to practice the Faith with great devotion.

For some unexplainable reason, when Monica was twenty-two, her Catholic parents married her to a pagan man, Patricius, who was much older than Monica. He had a violent personality and was unfaithful to Monica. Monica never spoke unkindly to her husband, but prayed for him continually. She was known to attend daily Mass, and gave generously to the poor.

Following in the practice of her mother, Monica devoted her days to teaching the Catholic Faith to her three children. Two of them eventually joined religious orders, but her son, Augustine, left home when fairly young to attend schools elsewhere. Likely his father wanted his son to follow in his immoral footsteps. By seventeen, Augustine had rejected the Catholic Faith and was living an immoral life.

Monica continued her devotions and prayer life, and by good example, converted her mother-in-law. After twenty years of marriage, her husband began to take her Christian message more seriously and began attending classes about the Faith. He finally changed his life and converted, then died only one year later.

Monica then decided to dedicate her life to her son, Augustine. She would ask priests and even bishops to talk to her son about the Church; however, his pride and his immoral lifestyle kept him from accepting the truth of the Catholic Faith.

Nevertheless, Monica continued to attend daily Mass and to pray for him. She would follow him whenever she could, talking to him continually about the Faith. One time, he took a boat to Rome, tricking her and leaving her standing on the shore. But she persisted, and followed him to Rome, and then to Milan.

It was in Milan that Augustine heard the sermons of the local bishop, St. Ambrose. Augustine went only to hear the speaker that was being raved about by the local citizens. Once he heard the powerful sermons of St. Ambrose, he began to listen to the message and to think seriously about the Christian religion. His mind struggled because he did not want to change his way of life.

Eventually, Augustine accepted that he could not continue to live apart from God. He began to attend catechism classes, and was baptized on Easter Sunday, 387. Monica thanked God for finally answering her prayers for Augustine’s conversion. While she and her two sons were making arrangements to sail back to Africa, Monica suddenly fell ill and died five days later. Before she died, she asked her sons to pray for her at Mass.

Augustine later wrote his famous book, The City of God, and wrote “If I am your child, O my God, it is because you gave me such a mother!”

We homeschooling mothers and fathers need to remind ourselves that Jesus is always ready to answer our prayers, but we must not become impatient if our prayers are not answered as quickly as we would like. Jesus just wants us to be faithful, to try to do our duty to teach our children the Catholic Faith, to say our Rosary, and to attend Mass. We need to trust in Him as to how and when he answers our prayers. It can become extremely discouraging when our children do not accept all the teachings of Jesus and of His Church, but we must try to overcome our discouragement with trust in Him and His Blessed Mother Mary.

St. Monica, pray for us homeschooling mothers to trust in Jesus and to dedicate ourselves to teaching our children the Faith, and also to live the Faith. St. Monica, pray for us by asking Jesus to help us to persevere for all our lives with Faith and Prayer and attendance at Mass as often as possible. Intercede for us with Jesus, that He grant us the fortitude and patience and trust that our spouses and our children and we will attain happiness in Heaven with Jesus and His Blessed Mother.