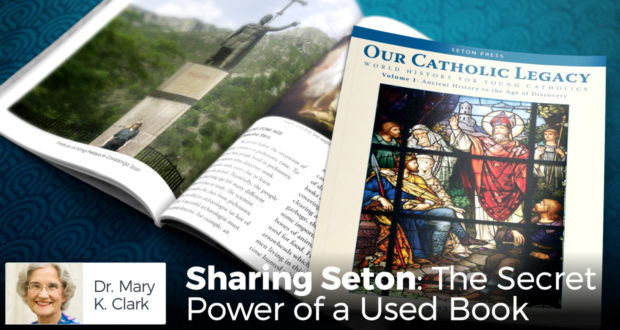 Sharing Seton: The Secret Power of a Used Book

We Catholics are in a crisis situation in this country.

Catholic churches are closing; and even where the parishes are not closing, oftentimes they don’t have a resident priest. Catholics schools are closing, dioceses are lucky to have any seminarians.

Catholic marriages have fallen by more than half since 1990—from 326,000 to 154,000. The vast majority Catholic women are practicing contraception. The rate of Catholic divorces are about the same rate as non-Catholics.

Few Catholics, even those who go to Mass on Sundays, know or understand the teachings of the Catholic Church. A recent survey by the Pew Research Center found that among Catholics who attend Mass at least once a week, 65% want the Church to change its teaching on birth control—and most of those who want the teaching to change also think the Church will change its teaching soon. This means that even among those who go to Mass at least once a week, two-thirds don’t understand the Church as an institution which passes along God’s unchanging laws.

Even for those parents who still hold to traditional Catholic teaching, what about their children? Society tells us all the time that rejecting God’s laws is the loving thing to do, and that upholding God’s laws is hateful and intolerant. It’s hard to go against this constant stream of criticism. Is it any surprise that so many young Catholics are flying the rainbow flag on their Facebook pages?

It’s hard to know where to start or how, humanly speaking, things can be turned around.

But here’s one thing you might try: when your kids are done with your Catholic books from Seton, give those books to another family in your parish. Any textbook you have will still likely be very serviceable, and you could also give workbooks away if they haven’t been used or have been only lightly used.

The other family doesn’t have to be a homeschooling family—lots of kids need supplemental work in math, or English, or spelling. And, as you know, while the Seton books teach those subjects, they also teach the Catholic Faith.

If you just went up to these families are starting talking about the Faith, you might not get very far. But by giving away Seton books, you can subtly and quietly introduce the kids and families to Catholic Faith and Culture.

The answer to the old catechism question of “Why did God make us?” is that God made us to know, love, and serve him in this world and be happy with him in the next. Notice how “know” comes before love and serve; because, if you don’t know God, you won’t be able to love or serve God.

Seton books will help children to know God. And it won’t be just the kids. As children read the books, they will ask their parents questions. Many parents have told us they did not realize many of the teachings of the Church, and this is a good opportunity to for parents to learn those teachings.

“Allow the Little Children to come to Me, for of such is the Kingdom of God!”