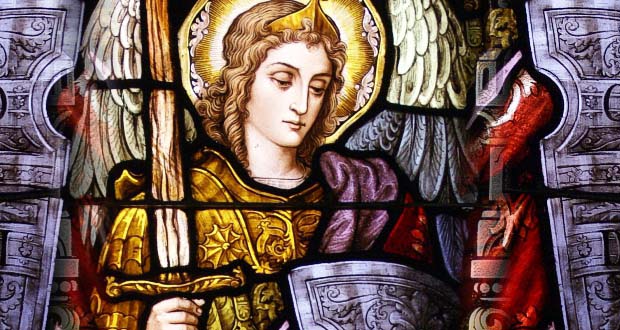 Dr. Clark shares the important of saying the St. Michael the Archangel prayer, and how he is a powerful protector for us here on earth in these dark days.

We sometimes hear about a “culture war” in our society, but the real war is a spiritual war for souls.

Our society surrounds us with anti-Christian values: the newspapers and magazines in the stores, the fiction stories in the library, the “music” played in stores and restaurants, ipods, movies, television, online selections, and so on. The anti-Christian culture seems to be in the air we breathe, as Dr. William Marra once said.

We parents want to keep ourselves and our children pure and away from the negative sources which can become habit-forming. As we teach our Faith and teach how to live a Christian life, we know we need extra help.

The best way to obtain spiritual help is by attending Mass and receiving Jesus Christ as often as possible in Communion. Jesus gives us the powerful graces to teach what we need to teach, and He gives the graces to our children to learn and to live according to what they have learned.

Our families receive powerful graces, daily help, and consolation from reciting the Rosary. When we kneel together as a family and ask the help of Jesus and His Blessed Mother, we are consoled and assured of great spiritual help.

It was St. Michael the Archangel who fought Lucifer and, by the power of God, thrust Satan down to Hell (Rev. 12:7). In our daily battle against the evil one, St. Michael is a special intercessor for parents struggling to keep their children from the devil’s wily temptations.

The prayer to St. Michael the Archangel is a powerful prayer which Pope Leo XIII wrote in 1884 and asked priests to say after every Mass. We now have a shorter version which, in 1994, Pope John Paul II asked “everyone not to forget it and to recite it to obtain help in the battle against forces of darkness and against the spirit of this world.”

The spiritual battle may seem hopeless at times as we view the anti-Christian activities of this current society. But the battle can and will be won, even in this world, as long as we and our children realize that the battleground is in the hearts and minds and souls of the children.

Twice Jesus spoke very strong words about children. Once, when the Apostles tried to keep the children from bothering Jesus, He said, “Allow the little children to come to Me and do not forbid them, for to such belong the kingdom of heaven.” Again, when Jesus was carrying His Cross, He spoke to the crying women of Jerusalem and said, “Weep not for Me, but weep for yourselves and for your children.”

In these current dark days when Satan is prowling the world to capture the souls of children, let’s be sure our prayers include the powerful St. Michael prayer:

Saint Michael the Archangel, defend us in battle. Be our protection against the wickedness and snares of the devil. May God rebuke him, we humbly pray; and do thou, O Prince of the Heavenly Host, by the Power of God, cast into hell Satan and all the evil spirits who roam throughout the world seeking the ruin of souls. Amen.

How frequently do you pray the St. Michael prayer?

How do you keep your children pure and away from the negative sources which can become habit-forming?