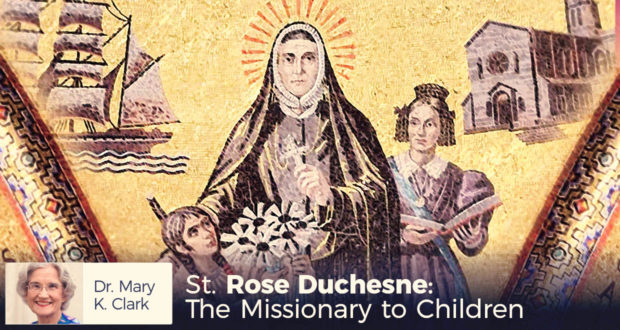 My mother told me stories about St. Rose Duchesne and St. Madeleine Sophie Barat, which she learned while attending a Sacred Heart school in Washington, D.C.

Perhaps my mother’s knowledge of St. Rose was why she was continually involved with improving the local Catholic schools and was extremely supportive of Seton Home Study School.

Rose was born in 1769 in France, where she attended classes with the Visitation nuns at the local church school and became serious about practicing her Faith.

She wanted to join a religious order at a young age, so she began living a religious lifestyle at home as if she were a nun. When she was 19, she joined the nearby Visitation convent.

Rose’s early training in practicing the Faith in her home established a lifestyle of daily prayer which never allowed other matters to interfere.

Her parents homeschooled her, teaching her about the Faith and the spiritual life until the day she entered the convent. The Catholic lifestyle of her parents was her model for living the religious life of prayer and sacrifice.

The French Revolution forced the closing of the convent almost immediately after Rose Philippine joined.

She then dedicated her life for several years helping the suffering people around her, assisting to hide priests, and even conducting small classes for homeless children.

Nevertheless, she kept up a rigorous daily schedule of personal prayer. During this time, several other women joined her in her work and in her prayer life.

In time, Rose met Mother Madeleine Sophie Barat, who had recently started an order of teaching nuns called the Society of the Sacred Heart. This Society was officially approved by the bishop and was dedicated to teaching Catholic girls in France who were not receiving formal education.

Rose, then 35 years old, spent some time with Mother Barat and became convinced that she and her sisters should join the Society of the Sacred Heart and dedicate themselves to giving girls a good Catholic education. Mother Barat appreciated not only the background and holiness of Rose, but also recognized her strong determination to do the Lord’s Will in spite of all difficulties.

Because of Rose’s leadership qualities, Mother Barat gave her responsibility to organize schools for Catholic girls throughout France. These were very small, one-room “schoolhouses” to start.

For thirteen years, now Mother Rose Duchesne established several small Sacred Heart schools, which basically consisted of one room where girls of various levels were taught together, not unlike the family homeschools today. In fact, the Sacred Heart nuns were usually helped by local mothers.

Mother Duchesne met several French missionary priests from America. She came to believe God was calling her to establish schools for the Indian children in America.

She told Mother Barat who, after a request from a bishop in the Louisiana Territory, assigned Mother Duchesne—and a few other Sacred Heart sisters—to travel to America to start Sacred Heart schools to teach the Indian and French children in his diocese.

Mother Duchesne arrived in the Louisiana territory, now St. Charles, Missouri, with four other sisters. She established the first “house” or school of the Sacred Heart in the New World in 1818, under the bishop of St. Louis. Mother Duchesne’s school was the first free school west of the Mississippi.

During the time she was there, Mother Duchesne became good friends with the famous American Jesuit, Father Pierre DeSmet, who spent years with the Indian tribes and was instrumental in peace negotiations with the Indians.

Mother Duchesne would make his altar cloths and listen to his adventurous stories about his teaching the Indians on the frontier while he gave her spiritual guidance.

In the next ten years, Mother Duchesne managed to start six more small Sacred Heart schools in Missouri and Louisiana.

When she was 72 and no longer the Mother Superior, Mother Duchesne fulfilled her dream to start an Indian School for both boys and girls in Sugar Creek, Kansas.

Although Mother Duchesne was never able to learn the Indian language, she spent hours in the chapel praying for the students. The Indian children named her “Woman Who Prays Always.”

Mother Duchesne is known for having made the following statement to her teaching nuns, but it is also for homeschooling parents:

“You may dazzle the mind with a thousand brilliant discoveries of natural science; you may open new worlds of knowledge which were never dreamed of before; yet, if you have not developed in the soul of the pupil strong habits of virtue, which will sustain her in the struggle of life, you have not educated her.”