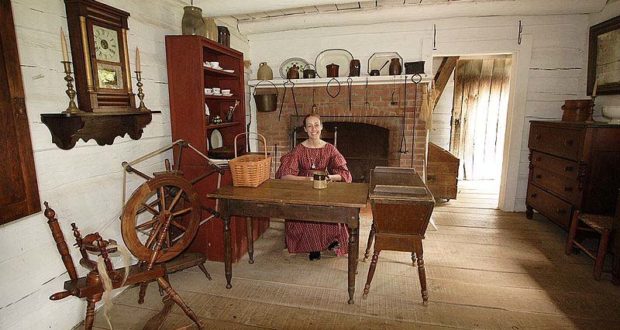 New Salem is a re-creation of the village where Abraham Lincoln lived in his twenties. The boys were fascinated to see how hard even little children had to work in the 1830’s. The boys saw a “blab” school, so called because, with no paper or even a chalkboard, students had to recite all their lessons. Most of the houses had only one room for the family to eat, work and sleep.

In the 1830’s wool had to be shaved off the sheep, washed, carded, spun into yarn, dyed, and woven into cloth, which only then could be hand sewn into garments. Each person had just a few pieces of clothing that were well cared for, so they would last and perhaps be passed on to another family member. Toys of the time, like simple popguns, Jacob’s ladder, and hoops ‘n sticks, were also treasured. This is a foreign concept to modern American children, whose drawers and closets overflow with clothes and toys.

Lincoln only spent about eighteen months in various “blab” schools, so he received the rest of his schooling at home. Although his stepmother encouraged his learning, his parents themselves were functionally illiterate, so his education was the result of his own efforts. He would walk miles to borrow a book, and sit up to read by firelight after a long day in the fields. He was anxious to overcome all obstacles standing in the way of his education, and should be an inspiration to home schooled children

The boys absorbed the history, but the more subtle lessons are even more valuable.