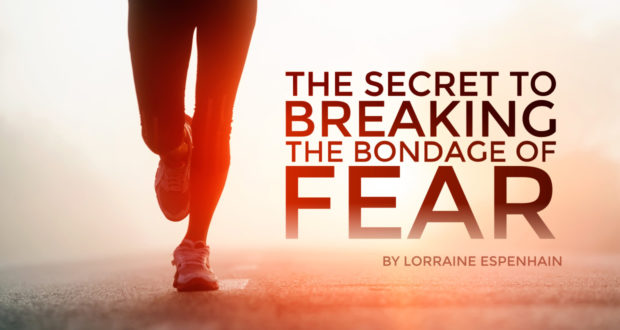 The Secret to Breaking the Bondage of Fear

Be of good courage, and He shall strengthen your heart, all you who hope in the Lord. (Ps 31:24)

Most people believe that courage is the absence of fear. This, however, is simply not true. True courage is doing something in spite of the fear!

Many people will leave this world having never achieved their full potential because they allowed fear to keep them from accomplishing things. This is why fear can be such a crippling thing, especially in the life of a believer in Christ.

Truth be told, if I waited until I felt no fear before I stepped out and did anything for the Lord, I’d end up doing nothing for Him. This is why we can’t allow fear to stand in the way of anything that God may be calling us to do.

I used to be terrified to drive a car because I have a lousy sense of direction. I once read an article about people who, for one reason or another, don’t possess a good sense of direction. They’re smart, gifted, and intelligent in a thousand other ways, but when it comes to finding their way around, forget it. That’s me. It’s still me.

But many years ago, the fear of getting lost – not the fear of getting into a car accident – kept me from driving. My husband had to take me everywhere. If he wasn’t available, I would take public transportation. I simply refused to get behind the wheel of a car. We didn’t have those GPS gadgets that you can now place in the car to help you find your way around. Apart from a map, you were on your own!

One night, I dreamed that I was driving! I loved the way that I felt in that dream! When I awoke, I decided that it was time to start driving. I made up my mind right then and there that I was going to drive even if I had to drive afraid. So I did!

I drove afraid, but I did it! Afterwards, even though my hands were trembling, I felt so empowered! I had overcome a fear! I had refused to allow it to stop me from doing something, and I felt so gloriously unconquerable that I got all giddy in the head.

To this day, I still have nightmares about getting lost. It’s one of those recurring dreams that I always seem to have. In my dream, I see myself driving into a strange city. I’m completely lost, and I begin to panic. Then I awake, and I realize that it was only a dream.

Are there things that you want to do, but fear is stopping you? Are you making the mistake that I used to make by believing that when you no longer feel afraid to do something, that’s when you’ll do it? You’ll be waiting a long time, my friend. That fear is not going to go away; you must do what you want to do in spite of the fear.

The Terror of Public Speaking

Obstinate girl that I was, I actually preferred to get an “F” for the assignment rather than stand in front of the class to speak, and so that day, an “F” went down next to my name in Mrs. Lynch’s grade book. Fear of public speaking had conquered me that day.

Years later, when I was in my early twenties, I was asked to speak at a nursing home. A friend of mine was heading up a nursing home ministry in my church, and she wanted me to speak to the residents about Christ. I dreaded the thought of having to speak in front of a crowd. I used to always say to the Lord, “Lord, when you take this fear away from me, I’ll do such and such for you.” I waited and waited and waited, but the fear never went away. It was always there. And now, here was my friend asking me to speak to a group of people before Jesus had taken away my fear.

Long story short, I decided to address the crowd in spite of my fear. Once I got started, I found that there was nothing to be afraid of after all. I actually enjoyed myself! Again, that feeling of empowerment came over me because I had conquered a fear.

It then became easier and easier for me to speak publicly. Now, it doesn’t bother me at all. It’s hard for me to imagine that once upon a time, public speaking was a genuine fear in my life because I can honestly say that it has been completely conquered.

But what if I was still clinging to the attitude that “when I no longer feel fear, that’s when I will step out and do such and such”? If we wait until the absence of fear exists before we ever step out and do anything, we’ll be waiting for a long time.

If there is something that you want to do, but you’re not doing it because of fear, then do it afraid! This is the only way that fear can be conquered. It is the only way that it can be mastered. Until you do this, fear will master you. It will cripple you and hinder you from doing things that the Lord may be calling you to do.

As I mentioned at the beginning of this article, many people will leave this world having never achieved their full potential because they allowed fear to keep them from doing things. Make up your mind that you’re not going to be one of them.

Remember, true courage is not the absence of fear; it is doing something in spite of the fear. So get out there and do your thing.

Even if you have to do it afraid!