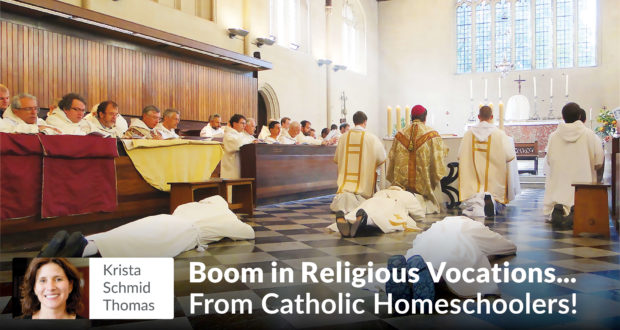 Catholic homeschoolers have known for years that religious vocations are one of the many fruits of homeschooling. A new CARA Georgetown study confirms it.

Across the country, a noticeable trend is on the rise. Data indicates young men with a homeschool background are four-times more likely to enter seminaries than those educated in Catholic institutions.

Data collected for the 2017 survey, conducted by Center for Applied Research in the Apostolate (CARA) at Georgetown University, found the following: Eight percent of seminarians on schedule for ordination had homeschooled for a length of seven years, on average, with discernment occurring approximately at the age of 16.

Compare survey data against the estimated 100,000 Catholic homeschool students to the 2 million educated in Catholic schools. “The evidence is highly encouraging. Going forward, the impact could be enormous,” said Draper Warren.

Warren, admissions director at Seton Home Study School in Front Royal, Virginia says this new data is an occasion to recognize the positive influence of the Catholic homeschool movement toward religious vocations.

In the Catholic Diocese of Arlington, where Father J. D. Jaffe serves as the director of vocations, the upswing in vocations from Catholic homeschool families is clearly visible.

“Homeschoolers have a disproportionately large participation in our discernment events in comparison to Catholic school and public school kids. The same increased numbers are seen in our seminarians where roughly 30% of them are from homeschooling households,” said Father Jaffe.

What exactly are motivating factors for discerning the vocation of the priesthood? Most certainly, the Holy Spirit, more than likely, the support and encouragement of families and parish priests, and, of course, vibrant homeschool communities. But could traditional Catholic homeschool programs influence seminarian enrollment?

Looking back on the home education he received, seminarian Nikolai Brelinsky believes homeschooling was helpful, considering it one of the essential elements to the discernment process.

“It certainly provided an atmosphere to consider it,” said the 2015 Seton Home Study graduate, who is currently studying at St. Charles Borromeo Seminary. The Seton program integrated the Catholic faith in all subject areas.

Brelinsky said, “In my personal opinion, homeschooling fosters the Catholic faith. Being homeschooled didn’t make me want to be a priest, but it did help me answer the calling through immersion of faith. Homeschooling goes hand in hand with the faith aspect.”

Growing evidence that Catholic homeschooling influences the discernment process can be seen in this year’s numbers at the Philadelphia-based seminary, where 10 of 47 in the seminary come from a homeschool background.

During Brelinsky’s junior year, when he was 16 years old, he discerned the vocation to Holy Orders. As a senior, he answered the call. In line with CARA’s study, the high school years can be transformational in the discernment process.

Supportive family and involvement within the homeschooling community and church activities were factors for building a strong faith experience in his formative years. He cited community service, annual homeschool Masses with the bishop, and weekly Eucharistic Adoration as blessings.

Draper Warren emphasized that Catholic homeschooling is a positive educational choice that helps sustain the Church in many admirable ways.

“We often don’t understand the historical importance of a movement while it is still young, but a generation from now we will look back and see Catholic homeschooling as partly responsible for keeping the Church vibrant in the United States. Vocations are just one of the many fruits of homeschooling.”