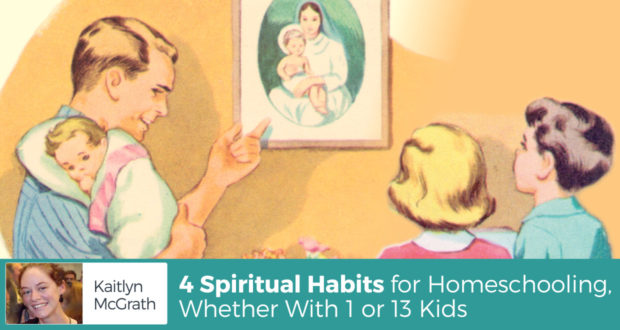 4 Spiritual Habits for Homeschooling, Whether with 1 or 13 Kids

If you would have told me a few years ago that I would be homeschooling my 3-year-old son for preschool, I probably would have laughed.

Not that I had anything against homeschooling; I knew a wonderful homeschooling family growing up, the Fatzingers, but it was never something I had considered for my family.

I always assumed our children would attend Catholic school like my husband and I had done.

However, during a discussion at a mother’s group of our children’s education prospects and the actual cost of private school, homeschooling entered the radar for the first time for my family. I spent the next year or so anxiously pondering my son’s education until I heard the Holy Spirit tell me while I was praying the rosary one day to just try it.

My husband and I figured preschool was the best time to “try it” because it’s not required in our state and, like I tell everyone who asks, even if it’s an epic failure, it won’t scar my child for life; it is only preschool after all.

So here we are. We are venturing into the world of homeschooling with our son and using the Seton preschool curriculum.

We chose Seton because I immediately fell in love with Seton’s Early Literacy for Young Catholics Pre-K Activity Book, and a woman in my mother’s group has been using Seton for years with great success.

Knowing I had to spiritually prepare myself for this year-long battle, I turned to Sam Fatzinger for her words of wisdom and advice. When I was growing up, she was a friend of my parents’ while her older kids were the same age as my siblings and me.

With 13 kids, her youngest child is the same age as my oldest, and I consider her an excellent mentor.

She offered four spiritual habits she has used through the years that have already helped me as I start this adventure:

While packing the car with many young kids early in the morning to attend daily Mass was a challenge, Sam knew the graces would be worth it.

“I have been going to daily Mass since I was 16,” she said. “It has been a source of strength and wisdom for me ever since. Any big or small decision I have needed to make has come from the grace I receive from the Eucharist.”

Going to Mass is a little easier now with older kids able to babysit, but even when she has to schlep everyone with her, she knows it’s good for her and her family. Plus, it’s part of their religion curriculum, so “Check! One class done for the day,” she said.

Another way Sam covers herself with graces is by attending a silent retreat once a year. She never knows what challenges the upcoming year will bring, so it’s important for her to devote an entire weekend to prayer.

“During that retreat, God pours down all the graces I’ll need to get me through the year,” she said.

2. Draw close to the saints.

Sam said she used to pray a novena leading up the first day of school, but now she finds herself praying to the saints constantly. For example, if she sees one child struggling, she’ll pray through that child’s patron saint for him. St. John Bosco, St. John Vianney, St. Therese of Lisieux, St. Martha and St. Joseph are other particular favorites.

“I think the saints are sitting up there just waiting for us to ask for their help,” Sam said.

In January, she has each child pick a saint at random through the website SaintsNameGenerator.com, and she encourages them to learn about and grow closer to the saint throughout the year.

They used to celebrate the kids’ feast days in a big way, but between that, birthdays, Baptism days and other big occasions, “we were eating cake every day,” she said. However, even without the big celebrations, dedication to the saints is a big part of their daily lives.

3. Pray throughout the day.

Sam laughs when, upon seeing a candle lit in the house, her children ask, “Who’s in labor?”

She’s gotten in the habit through the years to light a candle as a reminder to pray for a specific intention throughout the day, and yes, most of the time it’s for a woman in labor. She and her friends also often make an agreement, when some of them are going through a hard time, to set their kitchen timer every hour on the hour and say a quick prayer for the friend.

She prays the Angelus at noon with her kids (“whoever’s in earshot,” she said) and she puts on a Divine Mercy YouTube video at 3 p.m. for her kids to watch and for her to overhear while she gets ready for dinner.

“Every time things start to get crazy in the house, I think, OK, when was the last time I went to confession? Did I say my morning prayer today? Did I have quiet time today? Have I taken time for spiritual reading? Have we said a family rosary recently? When those are off, that’s when school falls apart,” Sam said.

4. Be confident in your vocation.

For Sam, homeschooling is not a 9-month job during the year; it’s an ongoing part of her vocation as a mother and something she always knew she was called to do even when it required sacrifice.

Having 13 kids in 23 years and homeschooling them on one person’s salary is truly a radical choice in today’s world. Sam laughed when she said one of her daughters knows the family is rich now because they buy paper towels, showing that “they went without so much for so long,” she said.

However, even though they went without some things, they were also given unexpected gifts.

“God doesn’t tell you that. He just says, ‘Trust me, have faith, be open to life, be open to what I have in store for you.’” 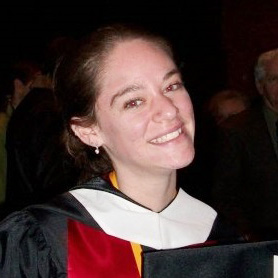 Kaitlyn McGrath is a wife and mother of two adorable kids from Crofton, MD. She is the daughter of a permanent deacon and sister of a priest from the Archdiocese of Washington. She enjoys cooking, gardening, reading, being outside and quiet.