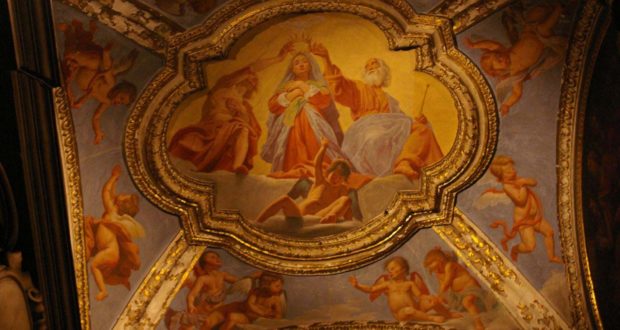 Feast of Mary Queen of Apostles

Devotion to Mary Queen of Apostles is one of the oldest in the Church. Traditionally, the feast has been celebrated on the first Saturday after the feast of the Ascension.

However, this feast day is a moveable one because of its connection to both Easter and the Ascension which are moveable feasts in their own rights. Adding to the confusion as to the exact date is the decision to allow the Ascension, which has traditionally been celebrated 40 days after Easter, on a Thursday, to be celebrated on Sunday before Pentecost.

This could foster the erroneous belief that the feast day of Mary, Queen of Apostles falls on the eve of Pentecost. www.consecratedtomary.wordpress.com

Since the majority of Canada and the United States now celebrate the feast of the Ascension on the Sunday before Pentecost, it might be easiest to remember the date for Our Lady’s feast as being forty-two days after Easter Sunday, whenever that day may fall.

At one time there were seven women’s congregations named for Mary, Queen of Apostles. More recently, when Blessed Father James Alberione established the Pauline family at the beginning of the twentieth century, it was with a special devotion to Mary under her title of Queen of Apostles.

This special devotion continues in all the members of all the branches of the Pauline Family which includes priests, brothers, sisters, consecrated single men and women and consecrated laity, as well as cooperators. This devotion keeps them firmly rooted in Jesus and guides and strengthens them in their evangelization and media apostolate.

In their booklet, Devotion to Mary, Queen of Apostles, the Daughters of St. Paul express, beautifully, the meaning of this title:

“Mary is Queen of Apostles because she was chosen to be the Mother of Jesus Christ and to give Him to the world; she was made the Apostles’ Mother and our own by our Savior on the cross; she was with the Apostles while awaiting the descent fo the Holy Spirit, obtaining from them the abundance of supernatural graces they received on Pentecost.” Mary, Queen of Apostles

There are biblical roots for this title, for example Acts 1: 13-14, which show Mary in the midst of the apostles, and an early homily (erroneously attributed to Cyril of Alexandria [cf.PG 77, 992] describes Mary as the one who leads all creatures to the truth because she brought forth the Light of the World.

It is through her that the apostles announce the Savior of the world.