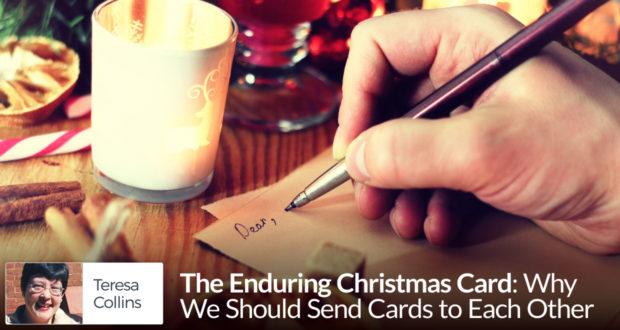 The Enduring Christmas Card: Why We Should Send Cards to Each Other

We send each other cards to mark really important occasions. Teresa Collins hadn’t realized why sending a Christmas card is actually a huge thing.

Sending Christmas cards by the postal service may be on the way to extinction in this age when most communication is through electronic devices.

However, the Christmas season deserves better than to be merely another opportunity for trivial communication, as we rush about, concerned with buying and selling, eating and drinking, decorating extravagantly, and celebrating a holiday the meaning of which we have all but forgotten.

When we send Christmas cards, similar to when we send wedding invitations or mark other events with some sort of distinct communication, we are saying implicitly that we are commemorating an event of importance.

When we commemorate Christmas, we are honoring an event of such importance to our world that we mark it with respect, festivity, rejoicing, and gratitude. “For what greater thing is there than that God should become man?” says St. John Damascene.

Almost twenty years ago, friends of ours sent us a beautiful Christmas card. It was handmade, written in calligraphy, and contained these words from St. Irenaeus of Lyons:

“How could they be saved unless it were He who effected their salvation? In his immeasurable love for us, He became what we are, in order to make us what He is. How can man go to God, if God has not come to man?”

These words of St. Irenaeus sum up the Incarnation, and if we think about their meaning, we truly have reason to celebrate Christmas.

When our first parents sinned and were banished from the Garden of Eden, the “rightness,” the integrity of man’s relationship with God was sundered. God became man to heal the wound of original sin, to restore and heal man’s relationship with Him. The second Person of the Blessed Trinity took on human flesh, lived as a man on earth, then died to “effect our salvation.” No mere man could accomplish this, but only He who is both God and man. “And there is salvation in no one else, (but Christ) for there is no other name under heaven given among men by which we must be saved.” (Acts 4:12)

“Although remaining everlasting God, He appeared on earth and lived among men. He became incarnate from the holy Virgin, and emptied himself, taking the form of a slave and becoming conformed to the state of our lowliness so He might raise us to the image of his glory.” (Liturgy of St. Basil)

God became man because He loved us infinitely. He became one with us so He might draw us to Himself so we might become like Him. St. Thomas Aquinas, in the Aquinas Catechism, says it was not for a trivial reason that God’s Son became man, but for our extremely great good. Specifically, that the rift between God and man be healed, that the distance between Creator and creature, always immeasurable, but in some sense greater since the sin of Adam and Eve, be bridged by the One who was both God and man. “….There is no greater proof of God’s love than that God the Creator became a creature, that Our Lord became our Brother, and that the Son of God became the Son of Man.” (Thomas Aquinas, Aquinas Catechism, Part I, Chapter 3)

When we think of this great love of God for us, our hearts are enkindled with love in return.

God became man and lived among us, a Man among other men, though without sin. He knew hunger and weariness; He knew sorrow and loss; He was (and is) misunderstood, despised, and rejected by many. He knew the human condition “from the inside,” as it were, and by this sharing of our humanity and the human condition, Christ shows us the way to our final blessedness in heaven. He is both the end of our earthly journey and our means of reaching that end. “….one and the same Person is God and Man, as God the end of our going; as Man, the way we are to go.” (St. Augustine, The City of God, II,2)

Christ, human and divine, knows our needs, our weaknesses, our struggles; He knows the perils of this world, and how long and hard a road it is for us to reach the happiness of heaven. We can look to Him who shared our humanity and who lived among us to show us the way we must go.

For almost twenty years, that Christmas card has perfectly summed up the meaning of Christmas and has been placed prominently on every Christmas tree we’ve had. It reminds us–and there are very few of us who do not need reminding now and then–that the festivities, the celebration, the rejoicing, and the good will that are part of Christmas, commemorate the truth that God became one of us to make us one with Him.

So, as the Christmas season comes around once more, we are grateful again to our friends who sent us this Christmas remembrance so many years ago.

And our hearts are full of loving gratitude because “the Word became flesh, and dwelt among us.”

Teresa Collins is a graduate of TAC, along with her husband Richard, to whom she has been happily married for 34 years. Together they have raised five children, one of whom is now in eternity, and homeschooled them from kindergarten through high school. Teresa lives in CO, where she enjoys baking, sewing, philosophy, religion, and literature, as well as walking her mountain property and enjoying the gorgeous views of her beloved Rockies.
augustine card christmas collins damascene irenaus john teresa teresa-collins 2016-12-13
Contributing Writers