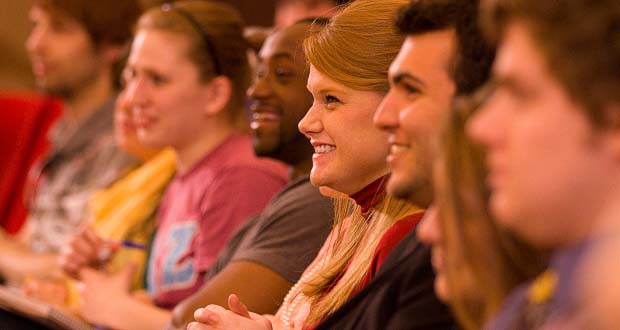 It is as though once a person achieves the age of 18, he becomes a legal adult, graduating out of a world in which he can be greatly influenced by his peers.

Versus college, the topic of peer pressure in high school seems to receive the lion’s share of attention; it is as though once a person achieves the age of 18, he becomes a legal adult, graduating out of a world in which he can be greatly influenced by his peers.

But sadly, peer pressure is a class from which few of us ever graduate. In fact, the peer pressure that one faces in college is likely to be stronger that at any other point in life.

Much of high school peer pressure can be avoided because the high school student lives at home.

Obviously, that is not the case in college: college is the student’s new home. Since most students attend a college away from home, the physical presence and emotional and spiritual support of their parents is gone, or at least, greatly diminished.

Also, in many cases, the friends who have helped shape students are no longer present, as they have chosen different paths. Nor do they have access to the church they may have grown up in, nor to the priests from whom they may have sought counsel.

Perhaps it is for these reasons that depression has become such a terrible problem among college students. When you see the college brochures for various schools, you often see pictures smiling faces and happy students, but the reality tells a much darker tale.

Based on a number of studies, depression is rapidly on the rise at many college campuses across America. In fact, suicide is the second leading cause of death for college students, exceeded only by car accidents.

Moreover, difficulties and problems lie not only in the persons, places, and things the student does not have access to, the problems often lie in those things to which he does have access.

The Recovery Connection, a rehab resource, warns about the dangers of peer pressure and substance abuse in college:

Peer pressure evolves when one person feels bad about saying no to a friend’s request. The student goes along with the request despite knowing that it is not the right choice. For example, students will often influence each other to use substances despite school responsibilities. Eventually, students will schedule classes around substance abuse activities with friends.

Games played when hanging out with friends involve binge drinking and experimenting with drugs. Fraternity and sorority parties are a guaranteed drinking event, tail-gating before games usually involves substance abuse, and pool parties at the off-campus housing are characterized by drunkenness. Regular participation with friends in the substance abuse lifestyle leads to risky behaviors.

Clearly, it is unfair to paint all colleges with the same brush. Some colleges seem to have dodged many of the problems outlined above, and certainly, while there is negative peer pressure, there is surely positive peer pressure at some schools and among many students. But whatever decisions parents make regarding college, they must remain cognizant of the fact that their peers play a tremendous role in their lives and their futures.

But it’s not only pressure to drink that a student can feel in college. There also can be pressure on student’s to stop living their Catholic Faith. This can come from peers, from professors, or simply because it is easy to drift away from spiritual responsibilities when experiencing an unfamiliar freedom.

So, how can a student live a virtuous Catholic life in college? The Cardinal Newman Society, which ministers to college students, has a few suggestions.

First, they suggest that you be a good student. Go to class, do your homework, and really focus on learning.

Part of this focus must be to realize that professors have their own agendas and don’t necessarily give unbiased information in all cases.

When you hear a professor attack the Catholic Faith, don’t simply accept it uncritically. Do your own reading and find the truth.

Second, find good friends. If your campus has a Cardinal Newman Society, that is a good place to start.

If not, look for other Catholic groups or pro-life groups. If that’s not available, then look for groups or clubs which do community service. Don’t abuse any illegal drugs, and be careful about alcohol. Don’t spend time with people who are substance abusers.

Make use of the sacraments, especially the Eucharist and Confession. Don’t ever miss your obligation to attend Sunday Mass.

Find a trustworthy priest or lay person you can talk to about any problems or concerns you have. And don’t forget your parents. They have your best interests at heart more than anyone, including even you. Listen to their counsel.

The most important decision affecting a student’s faith might be the first one: what college to attend.

There are many guides available, such as the Newman Guide to Choosing a Catholic College. The magazine First Things has also put out a college guide which ranks secular schools on how friendly or unfriendly they are to faith. College is about learning, so take the opportunity early on to learn about colleges themselves.