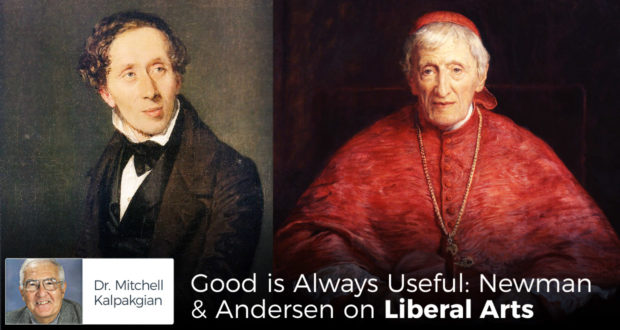 The attitude that liberal arts is a time-waste is not new. Dr Mitchell Kalpakgian shares inspiration from Cardinal Newman & Hans Christian Andersen.

Defending the ideal of liberal education in the Victorian Age that regarded it as “useless” and prized utilitarian education in technical and scientific subjects as practical and useful for an industrial society based on manufacturing and machinery, Cardinal Newman writes in The Idea of a University that “if a liberal education be good, it must necessarily be useful too.”

Nothing good can be useless or impractical even though its benefits do not appear immediately visible or measurable in some material way.

Newman indicates that the term “useful” has other meanings besides efficient, economical, or functional.

The Good is Always Useful

Arguing that “the good is always useful,” Newman explains that anything that is “beautiful, perfect, admirable, and noble in itself…must be useful to the possessor and all around him” but not always in terms of tangible results or sudden noticeable benefits such as a job or higher salary.

To Newman “useful” means real gains and improvements that transcend quantification and calculation. Unlike a train, car, or computer, the value of goodness “is not useful in any low, mechanical, mercantile sense, but as diffusing good, or as a blessing, or a gift, or power, or a treasure.”

Thus goodness always serves a practical purpose, reaps benefits, enriches human lives, and improves the world. It produces effects and aftereffects that Newman compares to the spreading, diffusing, and communicating of light, joy, and love.

The good is useful because of its discharge. Like a child’s play that produces joy, a person’s contemplation of beauty that evokes wonder, the pleasure of friendship that offers companionship, or the delight of singing that lifts the heart, goodness—like liberal education—brings immediate and far-reaching blessings:

Good is not only good, but reproductive of good; this is one of its attributes; nothing is excellent, beautiful, perfect, desirable for its own sake, but it overflows, and spreads the likeness of itself all around it. Good is prolific…. A great good will impart great good…. I say then, if a liberal education be good, it must necessarily be useful too.

‘Something’: A Hans Anderson Tale

One of Hans Christian Andersen’s stories, “Something,” especially reveals how, as Newman argued, the good is prolific and how liberal pursuits loved for their own sake yield a rich harvest.

In the story, five brothers all have great aspirations to leave their distinguished mark upon the world, to be “Something.” In their competition to outdo each other and prove themselves superior, the four younger brothers assume airs of grandeur and mock their older brother’s humble occupation.

The second brother ridicules the oldest brother’s desire to make bricks for a living; “Something very little, though,” says the second brother sarcastically. “Why it is as good as nothing! Better be a mason, as I intend to be.” The third brother, ridiculing the work of a mason, asserts that he will seek a higher profession and become an architect.

The fourth proclaims he will be a genius, an innovator and inventor, thus surpassing his older brothers. The fifth son, the most prideful of all, shows contempt for the ambitions of all his brothers: as an astute critic, his expertise will discover their failures and expose their shortcomings.

He boasts, “That will be something.” Their idea of “Something” is to surpass their brothers’ knowledge, wealth, fame, and accomplishments and gain worldly honor.

During his lifetime, the humble brick maker who earns a modest living generously offers some broken bricks and many perfect ones to a poor old woman, Mother Margaret, so that she can build a makeshift, lowly dwelling for a home.

The simple brick maker dies without distinctions or prestige, soon followed to the grave by the second, third, and fourth brother who all fulfill their worldly ambitions of mason, architect, and inventor. After the fifth brother, the critic, dies, he finds himself at the gates of heaven next to Mother Margaret. “And how did you leave the world?” the critic inquires.

Mother Margaret narrates the episode of an ice skating party where the whole town was enjoying the winter pastime. Foreseeing by a sign that a terrible storm would crack the ice, Margaret had screamed a warning that no one could hear.

Another thought crossed her mind: “I could set fire to my bed. Better let my house be burned to the ground than that so many should miserably perish.” She alerted the skaters and saved the town by setting fire to her straw.

Margaret is then welcomed into heaven, and the blade of straw from her bed is converted into dazzling gold.

The angel asks the critic what he brought with him to heaven, and then berates him: “Truly, I know that thou hast done nothing, not even made bricks.”

As the angel denies the critic admission into heaven, Mother Margaret pleads for him, arguing that the critic’s oldest brother’s kindness made possible her long life. Her shelter, made from the fragments of bricks, blessed her with a ripe old age. Her long life, in turn, allowed her to save the townspeople.

Therefore, her eternal gratitude to the brick maker moves her to ask for mercy for the critic who did nothing. The oldest son’s generosity to the old woman—his love of goodness for its own sake—gave long life to Margaret, who in turn saved the whole town from drowning and won heaven for the youngest brother.

The brick maker who appeared to be useless and seemed “nothing” to his brothers, and his kindness that went unrecognized by the world prove themselves invaluable, truly “something.”

The kindness of the oldest brother who offered bricks to Mother Margaret diffused, disseminated, and communicated goodness to many others through the old woman’s warning to the skaters.

Mother Margaret’s burning of her bed that lured the skaters off the breaking ice saved countless lives. In both cases goodness proceeded from the love of virtue for its own sake which then proliferated, reproduced, and overflowed into many other lives.

Their goodness was practical, beneficial, and useful beyond limit—an incalculable gift, blessing, and treasure. The effects and aftereffects of goodness can never be underestimated or foreseen. They transcend measurement and quantification.

A liberal pursuit, whether it is learning loved for its own sake, virtue valued as its own reward, or the delectation of fun for its sheer joy are those quintessential human experiences that Newman identifies as inherently “excellent, beautiful, perfect, admirable.”

Therefore they will impart great good in ways that can never be calculated or imagined by the utilitarian thinkers who reduce the “useful” only to its economic, mechanical, and material advantages.