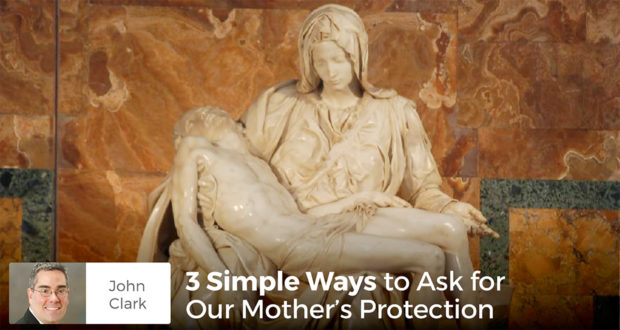 3 Simple Ways to Ask for Our Mother’s Protection

How can we hope to protect our family from the ghastly sins of today? John Clark offers three simple Marian devotions to get you started right now.

Being that I write largely “feel-good” columns, occasionally a reader will upbraid me for it.

“Don’t you get it? Don’t you understand how bad the world is right now?” they ask.

Well, I think I might. If I understand correctly, here goes.

In the Western world: atheists are applauded for their ipso facto “genius,” Satanism is increasingly seen as having more political rights than Christianity, fatherhood is mocked as anachronistic, feminism is defined by one’s willingness to have an abortion, the birthplace of Christianity is becoming a tomb of Christianity, marriage and gender have been redefined, the incessant demand for sins against the sixth and ninth commandments can scarcely handle the supply of fiber optic bandwidth, regulations and ordinances persistently and insistently hurt the poor, socialism is becoming the de facto religion, and the entire concept of religious liberty is beginning to mirror a time and place when blade sharpening was a growth industry and people were taking oaths on tennis courts.

Maybe these recognitions will make some of my critics happy, but for others, they might be objecting: “Wait a minute, wait a minute. This is your Mother’s Day column?”

The answer is yes, and the reason is that we need a reminder of how we got here. Destinations are the result of traveling along a path.

We arrived at this epically-bad epoch because we have rejected the most important mother: the Mother of God. Clearly, much of the Western world has simply bid God adieu, but make no mistake—in many instances, Mary was rejected first. The rejection of Mary (which could frankly be called “anti-Marianism”) in many quarters of Protestantism has had a terrible effect on Christianity.

For that matter, outside Catholic and Orthodox Christianity, who is championing her motherhood? Partially because of that rejection, you have today’s ghastly zeitgeist. Of the sins that are so prevalent today, which of them cannot be largely traced to a rejection of Mary?

For instance, the dismissal of Mary as the Immaculate Mother of God (along with the rejection of Marian prayers like the Rosary) weakens the arguments against abortion and contraception, and weakens the will against pornography and fornication.

What is the answer to all this? Jesus gave us the answer on the Cross: “Behold thy Mother.”

Consider this: Mary is trying to behold you right now.

Repeat: Mary is trying to behold you.

What is your response? Are you trying to behold her?

Happily, to do so, you don’t need to wait for a special feast day eight months from now. You can behold her—you can develop a devotion to her—right now. Here are three ways to help you get started.

One saint, St. Louis de Montfort, did think about it, writing: “If you say the Rosary faithfully until death, I do assure you that, in spite of the gravity of your sins, you shall receive a never-fading crown of glory.

Even if you are on the brink of damnation, even if you have one foot in hell…sooner or later you will be converted and will amend your life and will save your soul…if you say the Holy Rosary devoutly every day until death for the purpose of knowing the truth and obtaining contrition and pardon for your sins.”

I understand that the world has problems. But I also understand that many of these problems can be overcome with beholding our mother. This Mother’s Day, let’s commit or re-commit ourselves to her.

Holy Mary, Mother of God, pray for us sinners, now and at the hour of our death. Amen.