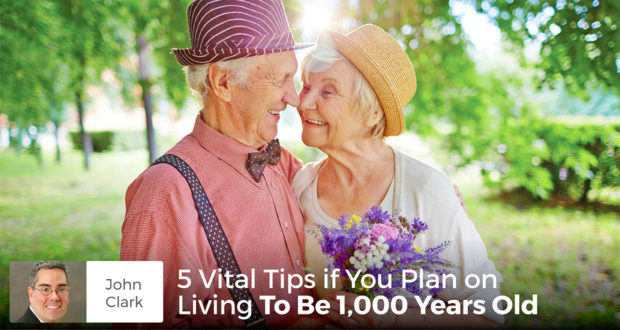 Five things to consider if you plan on living to be 1,000 years old. John Clark lightheartedly hypothesizes the pros and cons about life as a millenarian

A British doctor is claiming that people could live for 1,000 years, and he and his staff are now researching how they can make that happen.

When I read this story, I must admit, I got a little giddy. My first thought (and undoubtedly yours, too) was…compound interest. One dollar invested at 6% annual interest compounded monthly for 1000 years is over 98 septillion dollars.

How much money is that?

Let’s put it this way:

Forget bidding—you can “Buy It Now” on Ebay.

Another huge positive I thought of was that if people are living that long, restaurants will almost have to start offering bigger senior citizen discounts.

Right now, for instance, Steak ‘n Shake offers a 10% discount on Mondays and Tuesdays if you’re 50 or over.

But look into the future.

Call me a wide-eyed optimist, but I think we might be looking at world in which a 15% restaurant discount is not out of the question for a 950-year-old. (Or at a minimum, the 10% discount could be extended to, say, Wednesdays and Thursdays.)

So yes, I did get lost for a moment in the euphoria of millenarianism.

But then I started to think of some drawbacks, including the following.

I am the father of several teenagers. When you’re 45 years old, you grow accustomed to teenagers telling you that “you just don’t understand.”

Despite the life experiences that we have accumulated over the years, our kids still inexplicably doubt our wisdom.

Now, add 900 years to the equation and I can look forward to the following conversation:

Me: “For Heaven’s sake, I’m Yoda! I’ve got 930 years on you. I can remember a time when ‘Going Green’ referred to sorting trash, not to a skin condition. I understand quite well, thank you!”

I just don’t want to have those conversations.

What is the proper number? It’s hard to know, but consider this: if you’re 925 years old, but you have only 156 friends, you’ve got a lot of explaining to do.

Plus, I don’t want to spend 800 years worrying about it.

I remember getting my first mortgage when I was 22.

Being a neophyte of finance, when the officer explained to me that I wouldn’t make my last payment until the age of 52, I felt a bit sick.

Believe me, if people are living to 1,000, the titans of American finance will begin offering debt products in 300-year increments.

A 30-year subprime mortgage is depressing enough, much less a 300-year subhuman mortgage.

I do cardio six times a year. I sleep eight hours a week. I even drink (semi-)organic soda pop—lots of it. I scrupulously avoid secondhand smoke, with the exception of bingo two nights a week and the annual family vacation to Russia.

In other words, I’m doing the right stuff.

Yet, for whatever reason, I look older than I am.

But whoever you are, at some point you reach an age in which even compliments seem like pejoratives.

I know that is meant to be a compliment, but when you’re 45…

Regardless of our age, does any of us ever want to be told that we don’t look a day over 800?

Talk about depressing. I know, I know; there is the old saying that diamonds are forever. But are they? I recently saw an article that investigated the oldest jewelry in the world. Diamonds weren’t even on the list. You know what were? Snail beads.

Snail beads? There’s an industry that has been the victim of bad marketing.

How hard was it to come up with this slogan: “A snail bead is forever. No, really!”

If I’m granted another 955 years on this Earth, one of my business goals is becoming the next snail bead tycoon.

Maybe that is something to look forward to.