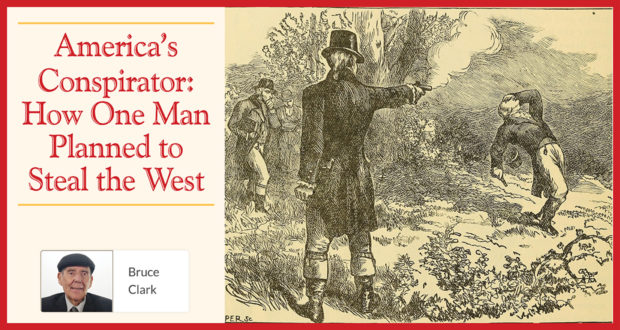 America’s Conspirator – How One Man Planned to Steal the West

He may have lost his vice-presidency of the United States but Aaron Burr had his eyes on a much grander prize – he planned to steal the Louisiana Territory.

Aaron Burr is a most interesting historical figure because he was the key player in the Burr Conspiracy, an attempt to extract the Western states and the Louisiana Territory from the American Union.

Being Vice President under Thomas Jefferson was a political disaster for Aaron Burr. Burr’s political career had resembled a shooting star. It had been vivid and bright early but had burned away with the killing of Alexander Hamilton in a duel on July 11, 1804.

This was not perceived as an appropriate act of a new country looking for high values of freedom and respect for all citizens.

Aaron Burr thought he could rebuild his life and find fame and fortune in the West, particularly in the newly acquired Louisiana Purchase. Most of that area still was unsettled, in part because the United States and Spain were in a continuing heated dispute about the borders of the Louisiana Purchase.

Many settlers in the area even talked openly of secession from the United States. Aaron

Burr was confident he could disconnect Louisiana from the United States, and then establish his very own Louisiana empire. All he needed was determination and a small but well-trained and well-armed military unit.

Putting His Plan in Motion

Burr put his conspiracy in motion by recruiting General James Wilkinson, the same James Wilkinson who had been an aide to General Gates at the Battle of Saratoga. Wilkinson was an arrogant, self-important, committed whiskey drinker.

With Wilkinson in his control, Burr’s next step was to convince President Jefferson to make Wilkinson Commander-in-Chief of the U.S. Army. That presidential appointment gave Wilkinson control of all military personnel, particularly those in the West.

For the next two years, Burr recruited influential people, including U. S. Senator Jonathan Dayton and the affluent owner of Blennerhassett’s Island, a small island situated in the Ohio River near Marietta. Burr quickly fortified the island and established his headquarters.

Burr’s scheme for power and control started to unravel on December 9, 1806, when nearby federal militiamen raided his two strongholds in the Ohio River.

In February 1807, Burr was arrested, charged with treason with an illegal military operation, and transported to the Federal Court in Richmond, Virginia, to be tried for treason. The trial was a sensation, as lawyers for the government and Burr’s defense team battled for Burr’s life.

Ultimately, in the end, Supreme Court Justice John Marshall explained that the Constitution defines treason in very specific terms. Therefore, in absolute adherence to that strict definition of treason, Justice Marshall ruled that Burr’s actions did not meet those specific criteria. Burr was acquitted.

Once freed, to escape the pent up fury of a great many Americans, Aaron Burr fled to France and later to Great Britain.

He eventually returned to New York in 1812 and lived the rest of his life in obscurity.