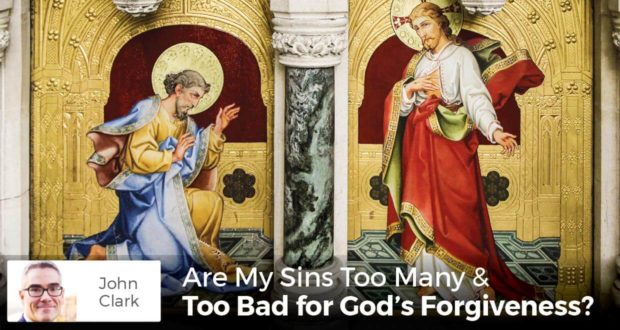 Are My Sins Too Many & Too Bad for God’s Forgiveness?

John Clark reminds us that our sins are never too many or too bad for the mercy of God and their forgiveness will only cause a greater Heavenly celebration.

“My sins are too many and too bad.”

Sadly and mistakenly, such is the thought process that will keep many people away from the Sacrament of Confession this Lent, just like many years of Lents before it.

When you claim that your sins are so bad that God cannot forgive them—that’s when.

When you suggest that the badness of your sins is greater than the love of God—that’s when.

When you act as though the Passion of Jesus is not enough to overcome your sins—that’s when.

To that last point: if you think that the passion and death of Jesus was not enough—that it was somehow lacking—you would do yourself a huge favor this Lent by meditating on the Passion of Jesus. We tend to sanitize our conception of the violence that Jesus suffered at the hands of men, but the truth is that Jesus’ scourging, crowning with thorns, carrying of the cross, and death were extraordinarily and shockingly violent.

The private revelations given to Venerable Mary of Agreda recounted in The Mystical City of God and given to Blessed Anne Catherine Emmerich recounted in The Dolorous Passion of Our Lord Jesus Christ attest to that fact.

When you read these revelations, it is worth noting that most Catholic theologians agree that the totality of Jesus’ sufferings were not required for the atonement of all sins, but that the slightest suffering of Jesus would have atoned for all the sins of humanity. Rather than failing to atone for all the sins of the world, the truth is that the passion and death of Jesus amount to what Saint Thomas Aquinas called a “superabundant atonement.” Thomas explains:

“He properly atones for an offense who offers something which the offended one loves equally, or even more than he detested the offense. But by suffering out of love and obedience, Christ gave more to God than was required to compensate for the offense of the whole human race. First of all, because of the exceeding charity from which He suffered; secondly, on account of the dignity of

His life which He laid down in atonement, for it was the life of one who was God and man; thirdly, on account of the extent of the Passion, and the greatness of the grief endured, as stated above.

And therefore Christ’s Passion was not only a sufficient but a superabundant atonement for the sins of the human race; according to 1 John 2:2: “He is the propitiation for our sins: and not for ours only, but also for those of the whole world.”

When Jesus was on the cross, He was thinking of you and me: desiring not to condemn us, but to forgive us. God, The Father of Mercies, wills to forgive us—for original sin, for venial sins, for mortal sins, for many sins. For all our sins.

Can you commit sins so bad or so many that God cannot forgive them? Of course not. Even if your sins are many and mortal, even if you really are as bad as you think—even if you are one thousand times worse than you think—the merciful God awaits you in Confession.

Jesus revealed to Saint Faustina that even if you had more sins than the grains of sand in all the oceans of the world, you should still approach Jesus with confidence of His forgiveness and mercy.

Why? Because God loves you.

If you have been away from the forgiveness of God, come back home where you belong. This year, this Lent, come to Confession and experience the loving mercy of God. Whatever your sins might be, your sacramental repentance will be the cause of a huge celebration in Heaven.

And they’ll keep that glorious party going until long after you arrive.