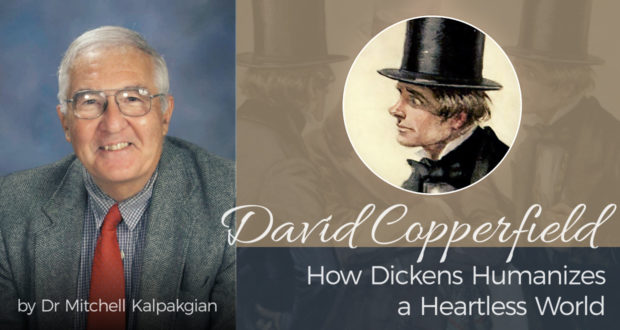 In Dickens’ David Copperfield, an autobiographical novel narrated by David based on many events in Dickens’ own life, the main character suffers many tribulations and tragedies that make him a victim of the false ideas of the Victorian age: its callous treatment of children, the practice of child labor, the worship of force, and the materialism of the Industrial Revolution.

Despite all the misfortunes in his early life that leave him an orphan, a victim of corporal punishment, and a boy subjected to child labor in a factory, David always lives with hope, brings good out of evil, overcomes great obstacles with patience and fortitude to find happiness and achieve success in an honorable way, and lives with Christian charity.

He never returns evil for evil, falls into bitterness and skepticism, or fails to act with a kind, grateful, charitable heart toward all people.

First, David is subjected to the cruelty of corporal punishment. While David’s childhood is filled with the happy memories of the tender love of his mother Clara and the kind heart of their servant Peggotty, his life dramatically changes for the worse when his mother, a young widow, marries Mr. Murdstone.

Obsessed with the false doctrine of the age that children require force, not gentleness, and that David is spoiled with motherly affection and needs discipline to prepare him for the battleground of life where only the strong survive, Murdstone insists on “firmness,” rigid, unbending force as the proper way to educate David when he does not master his studies:

Scorning all display of emotions as sentimental nonsense and never appreciating the sensitivities of a child’s emotional nature, Murdstone terrifies David with a raw display of brute power. Threatening to flog him, Murdstone justifies his cruelty: “If I have an obstinate horse or dog to deal with, what do you think I do?”

Murdstone is determined to tame the boy as if he were a wild animal. When he inflicts the physical punishment and ignores David’s pleas, “Don’t! Pray don’t beat me! I have tried to learn, sir, but I can’t,” David retaliates by biting the hand of his step-father, a reaction of self-defense that ostracizes David from his family and confines him to a boarding school where the schoolmaster Mr. Creakles also administers corporal punishment daily to all the boys.

As an additional penalty David at school carries a placard on his back that reads “Take care of him. He bites.”

Second, David is subjected to the Victorian gospel of work, the view that childhood is a time of unproductive idleness and a waste of time better spent performing labor and earning an income. Like other twelve year old boys, David lives a sordid life of mere survival in London, a boy without a family struggling to provide for his basic necessities by working full time.

After his young mother’s death Mr. Murdstone withdraws David from Salem House and finds him a position in a bottling factory, a life of degradation that robs David of the carefreeness of a happy childhood. David recalls his miserable life as a child laborer:

“I worked from morning until night, with common men and boys, a shabby child. I know that I lounged about in the streets, insufficiently and unsatisfactorily fed . . . . That I suffered in secret, and that I suffered exquisitely, no one ever knew but I.”

Desperate, abandoned, and unloved, David resolves to run away to an unknown aunt he has never met and to plead for compassion.

Walking fifty miles from London to Dover in the course of a week, David bursts into uncontrollable sobbing as he presents himself to Aunt Betsey Trotwood, pleading for her intercession: “I have been slighted, and taught nothing, and thrown upon myself, and put to work not fit for me. It made me run away to you.”

This decision marks the turning point of David’s life and testifies to the virtue of hope that has sustained David through all of his trials. Good can come out of evil. The future does not have to resemble the past.

Life is full of surprises and providential events like Aunt Betsey’s adoption of David, like his new life as a pupil at Dr. Strong’s Academy where he begins as the most backward student and graduates as the top scholar, and like his loving friendship with Agnes Wickfield whom he calls his “good angel” for all the care and good advice she gives David during this new chapter in his life.

David’s rise from neglected orphan to a blessed adopted child follows not only from the virtue of Christian hope that guides his entire life but also from the virtue of “earnestness”—a seriousness of moral purpose that accompanies him as he progresses in school, work, and marriage.

Determined to succeed by dint of determination, resolution, patience, constancy, and exertion, David always follows the path of honest effort, hard work, and moral rectitude in his aspirations to succeed in his profession as lawyer and writer.

As David feels responsible for providing for his bankrupt aunt and saving for his marriage with Dora, he performs two jobs, rises at 5:00 a.m. and ends his day 9:00 p.m., and makes a total commitment to his greatest responsibilities, “going to work with a resolute and steady heart” and imagining his labors as the efforts of a woodcutter:

“What I had to do, was to take my woodman’s ax in my hand, and clear my way through the forest of difficulty, by cutting down the trees until I came to Dora.”

Unlike acquaintances the same age, David does not live an irresponsible, uncommitted life like the wealthy Steerforth who lacks noble goals and only pursues pleasure by exploiting people for his own advantage. In Steerforth’s words, “I have not the least desire or intention to distinguish myself.”

Also David does not pursue his ambitions by the devious scheming of Uriah Heep who flatters, befriends, and curries favor in order to rise from his “‘umble” beginnings to a position of power and prominence and inflict pain upon those he controls, even attempting to bribe Agnes Wickfield to marry him. David selflessly fulfills his duties, sacrifices for others, and serves all those whom he loves with unswerving fidelity that is above duplicity.

Throughout the whole story David lives according to the virtues of the heart in a society of the hardhearted and ruthless epitomized by the firmness of Mr. Murdstone, the corporal punishment of Salem House, and the cruel mental torture inflicted by Uriah Heep on Mr. Wickfield. David always remains indebted with a grateful heart to his Aunt Betsey and provides for her like a loving son.

David always demonstrates a loyal heart to the friends of his childhood like Peggotty and Tom Traddles, never failing to visit them or be a part of their lives. David always expresses a compassionate heart for the suffering like Mr. Peggotty and Em’ly whom Steerforth betrays by false promises.

David never omits a kind deed to his early benefactors, the Micawbers who provided him board and room in London. David shows a true, undivided heart and remains faithful throughout a lifetime to dear friends of his happy childhood like Agnes Wickfield.

He never forgets a favor, takes for granted an act of charity, or fails to show appreciation for the people who have blessed, befriended, or loved him, cherishing the motherly care Aunt Betsey tendered him, the education he received from Dr. Strong, the constant friendship and affection of Agnes Wickfield, and the gift of Dora’s love he received in his marriage.

Dickens’ hero illuminates the power of hope, effort, integrity, and charity to humanize a heartless world that mistreats children, reduces people to things, asserts that might is right, makes a god of Mammon, and holds that all of society is governed by self-interest.