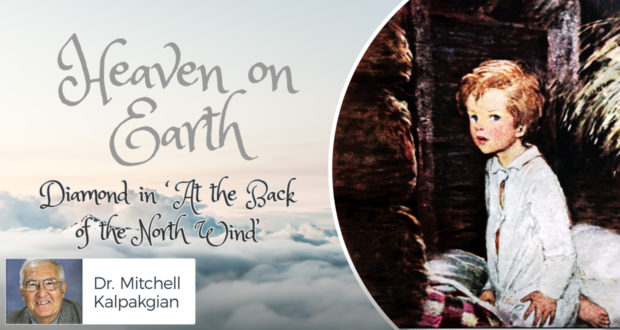 Heaven on Earth: Diamond in ‘At the Back of the North Wind’

There “something better than mere happiness” fills his being, overflows into his daily life, and transfigures the lives he touches. Filled with the energizing, life–giving breath of the North Wind that mysteriously transports him into a higher spiritual realm, Diamond always returns to his normal, ordinary life with an extraordinary grace that radiates goodness and uplifts the spirits of all the people he encounters in his daily life.

Like a window that allows the light from the outside of the home and from the world above to enter the house and permits the members of the household to look beyond the walls and glimpse the glory of the sky, Diamond likewise communicates a light and exuberance from the back of the North Wind into people’s lives that enlarges their vision. Diamond teaches them how to transcend the mundane business of work, money, cares, and the struggle to survive.

While no one takes Diamond seriously when he refers to his journeys to the back of the North Wind at night when he falls asleep, everyone feels the cheerfulness and happiness he brings into each place and into each person’s life. His love of life is irrepressible and boundless.

For example, when Diamond’s mother dreads the future with anxiety because her injured husband cannot earn wages or provide for his family, Diamond reassures his mother that birds never go hungry: “But the birds get through the winter, don’t they?”

He reminds her that, no matter the economic condition of the family, he has never gone hungry: “But I haven’t even got a cupboard, and I’ve always had plenty to eat.” Diamond’s childlike innocence with its simple words inspired from his vision of the back of the North Wind relieves the mother’s fears of destitution and fills her with a trust in God’s Providence.

She recalls hearing similar words at church, “something like this, that she hadn’t to eat for tomorrow as well as for today.”

Light from Another World

Despite the gloom that hovers in his home and the sadness that preys on his father and mother, Diamond fills the air with the happy sounds and jubilant music he has heard at the back of the North Wind. He entertains baby brother with rollicking rhymes that he recalls from the tune of the river he heard in his dream.

He notices the uncanny resemblance between the flowing nursery rhymes his mother reads to baby and the lyrical music he heard in the faraway country, lines like “whence comes the wind that blows on the hollows and over the shallows where dip the swallows alive it blows the life as it goes awake or asleep into the river that sings as it flows into the sheep awake or asleep . . .”

These verses fill baby with peals of laughter as he and Diamond revel in the enchantment of song and dance that mysteriously fills the drab home with the light and laughter of another world.

Everything that Diamond remembers from his travels with the North Wind and visits at night to the far country, he incorporates into daily life. He not only amazes his mother by the sweetness, kindness, and hope he brings in her life (“you’re as good to your mother as if you were a girl”) but also by his lighthearted, playful love of life (“I declare a body might think you had been among the fairies.”)

He also proves a blessing to his father by learning his business of cabman driving horses in London and providing for the family. Mastering the skill of horsemanship, Diamond again brings the influence of the North Wind to the people and society around him. The other drivers, accustomed to foul language as normal speech, soon control their tongues and learn to respect the innocence of a boy.

Wherever Diamond goes, he comes as a messenger from a higher world, a happy child who drives out evil’s darkness and ugliness with a purity of heart and innocence that melts hardheartedness.

Driving through the streets, he comes to the rescue of Nan, a young girl sweeping the streets harassed by ruffians attempting to seize her broom. Diamond arrives as an angel to deliver a defenseless child from boys tormenting her like demons: “I couldn’t let them behave so to a poor girl—could I, father?”

Diamond’s nature always responds to suffering. When he overhears a drunken cabman quarreling with his wife and provoking the screaming of their child, he responds with the same brotherly affection to this baby that he showed to his own brother with his nursery tales.

He combats the devil of misery with the same kind touch he tendered to Nan. Lifting the child from the crib, he smiles and plays with the child, entertaining the baby with the lyrical nonsense rhymes that stream from his mouth like the music of the bubbling, gurgling river he visits in his dreams.

With awe and gratitude the cabman replies to his wife, “I do believe that wur a angel just gone.”

Everywhere that Diamond goes, he changes the atmosphere from dreariness to lightheartedness; everyone unfortunate he finds he lifts from misery into gladness; all who encounter him call him angel, fairy, messenger, a silly, and God’s baby.

Although Mother questions Diamond about fairy tales being true (“But surely you’re not such a silly as to take it all for true, Diamond?”) and Nan argues “Dreams ain’t true,” Diamond never doubts that fairy tales, nursery rhymes, and visions have the resemblance of truth.

They are no more imaginary than real windows. Like a window that leads out and beyond, a story in the form of a book, fairy tale, or rhyme allows the human spirit to transcend a narrow world and to discover a heavenly realm that intermingles with the human world in the way the North Wind visits Diamond at night through a window and leads him to beautiful visions in his dreams.

The mirth and laughter breathed into Diamond’s heart at night then overflows into the many lives he renews with the joy he brings from a faraway country. Like the North Wind that visits Diamond, this celestial world touches human life whenever a child is born, one who joins the two realms as naturally as a window receives light and opens to the air.

A baby too is a window like a fairy tale, a messenger from a spiritual kingdom.

If I Were A Dream…

The dreams Diamond sees at night are not idle fantasies or figments of the imagination but the deepest desires of the human heart. They offer visions of pure happiness, stars that shout with laughter from the sky as they cry “Now let us have some fun” and cherubs who gambol in frolic across grass slopes in a spotless world of shimmering beauty.

There joy does not alternate with sorrow but overflows in a rush everywhere like a streaming river; there only mirthful play abounds that rejoices the heart, not the drudgery of toil or the weariness of suffering.

As the North Wind reassures Diamond, “I think . . . that if I were only a dream, you would not have been able to love me so.”

Likewise, no one would have been able to love Diamond’s goodness so if it were not real, if it were merely make-believe.

At the back of the North Wind is Heaven itself that gives glimpses through the innocence of children and through the happiness of love that overflows from the human heart.