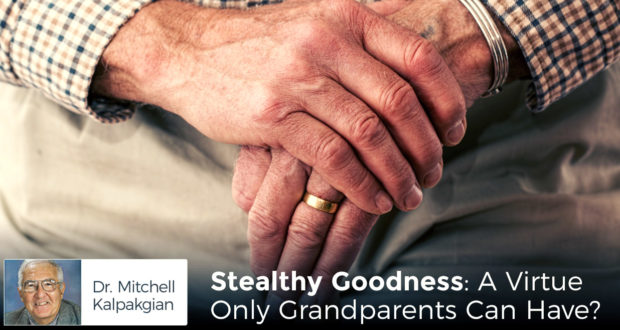 Stealthy Goodness: A Virtue Only Grandparents Can Have?

In The Princess and the Goblin, one day Princess Irene wanders upstairs in the castle, notices a half-open door, and hears a humming sound.

Opening the door and entering the room, she discovers a mysterious elderly woman with a regal presence, one who does not look old because of her luxurious long silvery hair, unwrinkled skin, and radiant eyes. Puzzled at the royal lady’s hidden presence in an upper room, Irene naturally wonders who this person is.

The queenly woman explains, “I’m your great-great-grandmother” and then explains the reason she lives in the castle: “I came here to take care of you.”

This bond between grandmother and grandchild illuminates the special virtues of older parents and grandparents in the lives of their offspring. No matter how old, forgotten, or unnoticed, the great grandmother’s love for Irene remains constant, caring, and provident.

Forced to be On Their Own

After high school graduation many young men and women report they are obligated “to be on their own.” They are expected to finance their further education with loans, to earn a livelihood that will provide room and board, or to be free of indebtedness to their parents.

Likewise, their marriages need to be absolved of any dependence on parental financial aid in furnishing an apartment or purchasing a house.

The idea is based on the image of old birds teaching young birds how to fly, and the idea gives the impression that the duties and obligations of parents have now come to their natural end.

Parents are no longer burdened with the provision, care, and education of their adult children and have a right to enjoy their own lives in freedom without the onus of anxiety and concern for providing for their offspring.

Parenthood, however, is not a temporary union but, like marriage, an indissoluble relationship. No mother or father ever stops being a parent or grandparent because of the intimate bond of nature.

This vocation continues throughout the course of a lifetime and always obliges parents and grandparents to continue to love all the members of their family in small and large ways whether it is assisting young mothers, babysitting the children, offering financial assistance during college years, or transmitting wisdom.

The relationship between the old and the young enriches the lives of all members of a family and allows for a fullness of joy and a network of friendships that instill a sense of belonging that reassures each person that he is not alone or without sources of help and advice for the many vicissitudes of life.

Parents who help their children pay for their education, purchase a home, or loan them money to begin a business teach them generosity, a virtue that an older generation can transmit to a younger one which then, in turn,  can pass down to the next generation.

These parents also teach fidelity, providing a living example of a commitment to one’s loved ones that endures in the course of an entire lifetime. Their example also illuminates the blessedness of giving, reassuring family members that, in St. Paul’s words, “love never ends.”

A Christian Way of Life

Parents who uphold all their duties and obligations to their offspring with unstinting charity and care throughout the years teach them a Christian way of life and the meaning of civilization: the perpetuation of customs, morals, and traditions that endure throughout the ages because they are lived, loved, shared, and communicated.

One can only give or transmit what one possesses. Good examples produce more good examples. Dedication, a sense of vocation, a fulfillment of promises, and the strength of love embodied in an older generation form the virtues of the heart in the younger generation.

If parents do not center their lives in their children and grandchildren and esteem them as the “treasure” Christ refers to in teaching “Where your treasure is, there is your heart also,” then love does not grow and bear abundant fruit.

The growth of family love does not end or grow cold when children graduate from high school, marry, or enter adulthood. Instead it assumes a new form, the ability to anticipate a need and provide for it without being asked. In the words of an old proverb, “Do good by stealth and blush to find it fame.”

The virtue of older parents or grandparents to their adult children or grandchildren is the virtue of the quiet benefactor—one who gives silently without notice, one who intervenes in the most simple, unobtrusive way to alleviate a problem, one who cheerfully volunteers to do favors with unassuming humility.

The following examples of the love of older parents for their adult children come from real life. These parents knew that no one should be “on their own” no matter their age.

Michael, a young man in his twenties, had arrived home for the Christmas holidays to visit his parents. At the end of his vacation, however, he needed a ride to the airport in Boston—an unpleasant task he did not wish on anyone. He hesitated to burden his father and force him to lose a day of work and drive through heavy traffic in a congested city and lose his way. No bus or public transportation was available to accommodate his time of departure.

The cost of a taxi was exorbitant and unaffordable. Michael did not know who to ask. He did not want to be a nuisance by inconveniencing someone to drive an hour in unfamiliar territory through a maze of traffic. When his solicitous mother inquired about his transportation to the airport, he simply said that he had not yet finalized plans.

Michael’s mother had received a friendly telephone call from her sister Alice.  Exchanging news about their children, the conversation casually mentioned that Michael was leaving in a few days but was unsure of his ride. The mother just casually mentioned the fact but did not sound the least anxious. Aunt Alice, however, did not require a formal request or plea for help.

Without Michael or his mother giving the slightest hint of worry or urgency, a transportation problem was solved by a cousin’s “last-minute” weekend plans that just coincidentally fit his travel plans. Older family members still felt compelled to be mothers to their adult children.

By intuition they sensed the need; behind the scenes they arranged for everything; in quietness they performed the favor without ever being asked or consulted; in love they extended themselves in the way that parents and grandparents know they should no matter the age of their children or grandchildren.

On another occasion Edward’s visit to his parents led to a conversation about purchasing a home. Married for four years with two children but renting apartments, Edward explained that he and his wife were saving to make a down payment on a house once they could afford 25 percent of the cost.

The retired father, who has just sold his home and moved into housing for the elderly, offered to lend enough money for the down payment with the understanding that Edward would make monthly payments with no interest charge. Again a sensitive parent, sensing a need and offering financial help, made the purchase of the home possible sooner than expected.

Once the monthly payments began, Edward received a telephone call from his father who told him to stop all further payments. Edward’s mother had reminded her husband that they both owed their son a special favor of gratitude for all his contributions to the youngest daughter’s college education.

Edward had helped pay for board, room, and tuition. A father and mother’s love had not dramatically ended once their children reached 18, 21, or 30. Their love, care, and kindness knew no limits.

They too performed good deeds in quietness, in simplicity, by foresight, and by anticipation.

These favors and thoughtful acts of charity bond families forever with profound gratitude.

This is the special virtue and grace of grandparents—to keep the family one, harmonious, and loyal for a lifetime.