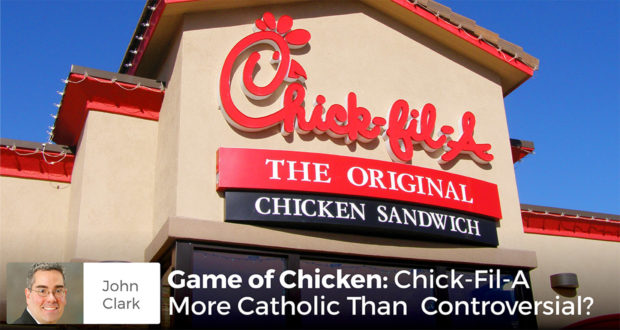 John Clark noticed that if you pass the litmus test of political correctness, you miss out on many simple, good things. Is it worth it? – Eat More Chicken!

I wish that politicians would stop giving me more reasons to eat at Chick-fil-A.  I’ve been on a diet since January and I’ve lost about forty pounds, so the last thing I need is elected officials practically mandating that I eat there.

Yet, they continue to do so.  Who is the latest culprit?  Bill de Blasio, the mayor of New York City.

According to Newsmax.com, Mayor de Blasio recently offered this sage advice in reference to the opening of a new Chick-fil-A restaurant in Queens:

Of course, very little passes the litmus test these days.  But perhaps litmus test is the wrong metaphor; a more appropriate metaphor would be a limbo stick, because to be considered properly “PC” these days, you and your moral code must pass under a moral limbo stick that is now subterranean.  Like the song says: “How low can you go?”

For the record, here is Chick-fil-A’s official stance toward such matters:

“The Chick-fil-A culture and service tradition in our restaurants is to treat every person with honor, dignity and respect — regardless of their beliefs, race, creed, sexual orientation or gender. “ (Emphasis mine.)

In particular, that highlighted part sounds pretty reasonable; it is also in line with the official teachings of the Catholic Church, with common decency, and with every single conversation I have ever had with any Christian in my entire life with regard to such matters.

When I read the comments of the PC crowd, it is clear that Chick-fil-A is their favorite bogeyman.  But I wonder if PC ever actually goes to Chick-fil-A.  Perhaps they envision that Chick-fil-A is merely the large-scale corporate version of Seinfeld’s “Soup Nazi” who whimsically and randomly refuses to serve those whom he dislikes: “You’re LGBT?  No chicken for you!”

This may come as a real surprise to PC, but I’ve never been carded for sexual orientation when I’ve ordered.  Can you imagine?

Chick-fil-A employee: “Welcome to Chick-fil-A. How can I help you this morning?”

Me: “Yes, I’ll take a sausage breakfast burrito and a Greek yogurt parfait.”

Chick-fil-A employee: “I’m sorry, sir, but I’m going to have to see some gender ID.”

Whether one is talking about restaurants, bakeries, or individuals, it is slanderous to peg every Christian as a hater.  It’s also mean.  It’s also just plain nuts.

But it is the PC way.  It is a way in which more and more people are viewed suspiciously, but none more than Christians.  The more Christians stand by their faith, the more they are viewed as hateful.  As someone once put it, “The only good Christian is a bad Christian.”

Sometimes I feel bad for PC on this issue because everything at Chick-fil-A is so, so delicious.  Was it Saint Augustine or my wife who once exclaimed: “My gracious, those peach milkshakes are good!!!”

Alas, they miss out.  But don’t feel too bad for PC; they still have Starbucks: home of over-roasted coffee beans, over-bearing store development, and over-priced everything.

There goes my diet.